Oh mama, Chicago has lots for you! Families looking to give back to the matriarch who keeps on giving need to look no further than the following Mother’s Day options…

The Second City presents a world premiere show devoted to the mother of Canadian Prime Minister Justin Trudeau. Co-written by Margaret Trudeau, herself, and award-winning playwright Alix Sobler, “Certain Woman of an Age” performs at the UP Comedy Club (May 9-12).

“I’m thrilled to be a part of sharing Margaret’s story in this intimate setting. Through her courage, insight, and humor, we all stand a little taller and are better able to face the ever-challenging world around us,” says director Kimberly Senior.

“I first met Margaret Trudeau 25 years ago. I was asked to meet her after writing a screenplay which featured her as one of the main characters. The film never happened, but a friendship was born,” explains executive producer Diane Alexander. “As the years went by, I realized her real-life story of grace, forgiveness, love, and determination in the face of unspeakable tragedy is a magnificent story of survival and more compelling than any fiction.”

Theater and a good cause come together thanks to the Neo-Futurists and “The Egg Wrench: 30 Egg Plays in 60 Egg Minutes,” a benefit for the Chicago Women’s Health Center at the Neo-Futurist Theater (May 12).

“No matter what your relationship is to motherhood, we all undoubtedly came from an egg,” notes ensemble member Ida Cuttler. “This Mother’s Day, we are proud to be performing some of our wildest, ‘yolkiest’ plays in support of the Chicago Women’s Health Center, a vital organization that provides women and trans people with access to healthcare and education, as well as a respectful environment where people can pay what they afford.” 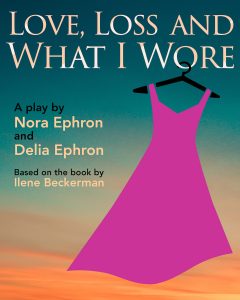 The Saint Sebastian Players are giving moms free admission (with your ticket purchase) for the Mother’s Day matinee of “Love, Loss and What I Wore” by Nora and Delia Ephron, based on the book by Ilene Beckerman, at St. Bonaventure (May 12). The show includes a MOMosa toast with the cast.