In the world of music festivals, it’s a sad but true reality that male artists almost exclusively dominate the headlining slots. When Bikini Kill led a massive “Rebel Girl” singalong during their Riot Stage-closing set at Riot Fest on Sunday, Sept. 15 – the third and final day of the Douglas Park-based punk, rock and metal bonanza – it was clear that women, both on stage and in the crowd, were more than ready to rage in the spotlight.

Early on in Bikini Kill’s set, front-woman Kathleen Hanna – who color coordinated her pink and metallic ensemble with her environmentally friendly reusable water bottle – asked cisgendered white men to notice all the space they were taking up before thanking the male feminists in the crowd for “how cool” they were going to be this “whole f*cking show.” A seething rendition of “Demirep” followed with Hanna howling the defiant lyrics as bassist Kathi Wilcox, drummer Tobi Vail – who also served as lead vocalist elsewhere in the performance – and new guitarist Erica Dawn Lyle thrashed through the two-minute fire-starter. 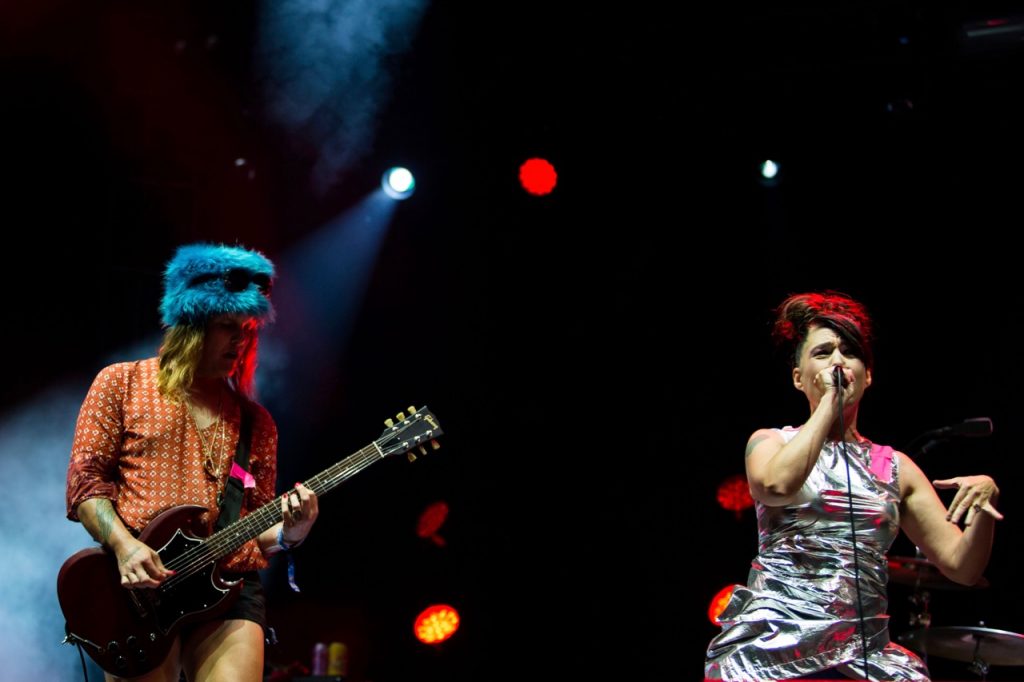 Songs like “Carnival,” “Alien She” and “Double Dare Ya” also resinated with the crowd during what was Bikini Kill’s first Chicago show in over two decades.

Throughout the night, Hanna took time out to share observations, reflections and hopes with fans, old and new, venting about how the highs and lows of these “troubled times” can lead to exhaustion. However, when a crowd full of Bikini Kill fans come together, optimism rules the day. The front woman pointed out that she felt great seeing “this many people together, who [she’s] hoping want to change the f*cking world and make the world a better place and take this country back.” Hanna quickly adjusted her statement to factor in that taking the country back may be a bit of a reach as rich people have always owned the land. The ensuing track, “Reject All American,” utterly decimated any remaining concept of the American dream.

Prior to Bikini Kill’s headlining slot on the Riot Stage, punk’s poet laureate Patti Smith performed a set that was at once vulnerable, empowering and beautiful, while still offering insight into the state of the world and revealing how the past and the future are never far apart. A poignant take on “People Have the Power” – during which Smith listed a number of collective powers including the power to dream, the power to vote, the power to strike and the power to love – kicked off the performance. 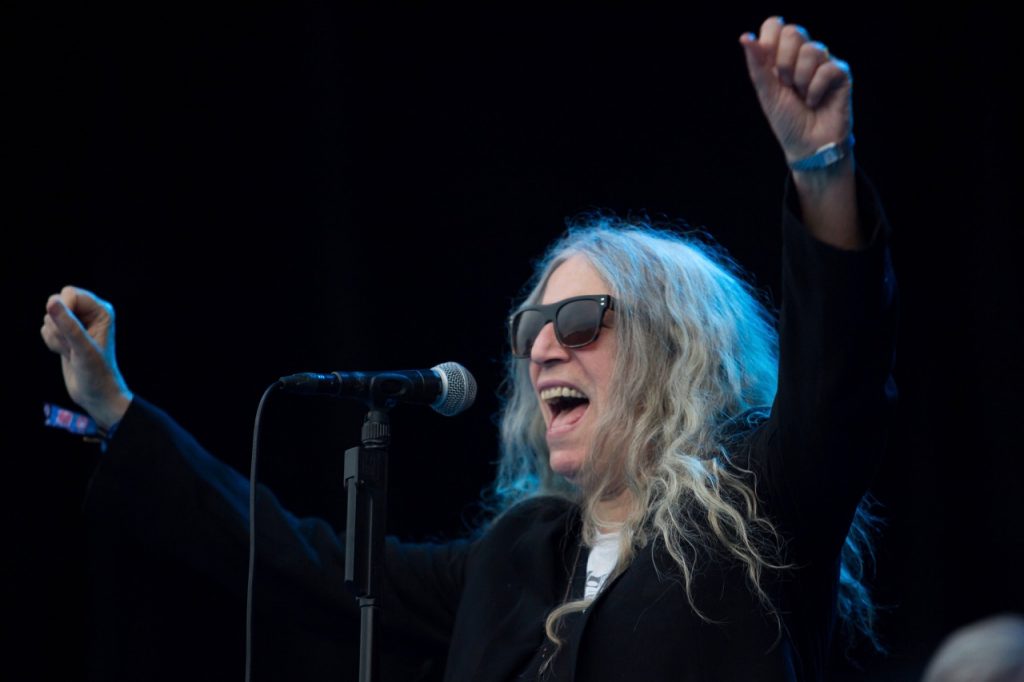 “After the Gold Rush,” “Are You Experienced?” and “Beds Are Burning” were among the covers that Smith and her group made their own while “Because the Night” and “Gloria” perfectly concluded the set.

In honor of Bikini Kill’s epic return, Riot Fest scheduled a lineup exclusively comprised of female-fronted acts on the Riot Stage on Sunday. Skating Polly and The Beaches warmed things up in the early afternoon and Against Me! celebrated two of their most beloved albums by performing Reinventing Axl Rose and Transgender Dysphoria Blues back-to-back. 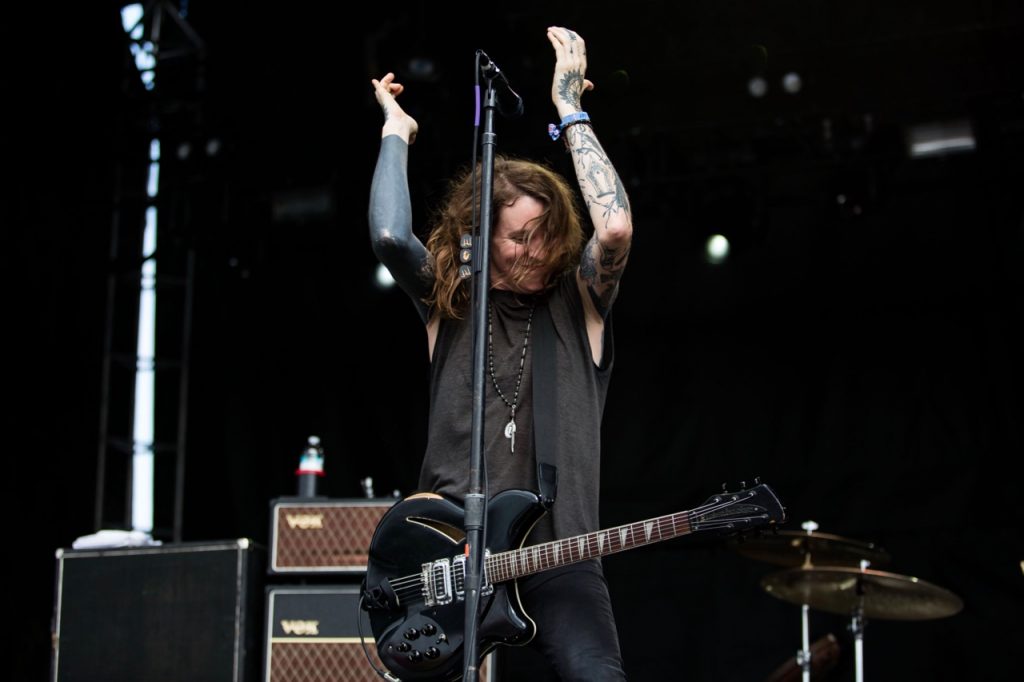 Against Me! front-woman Laura Jane Grace called Riot Fest her favorite festival right out of the gates, doubling down later in the set with dedications and thank yous to the bands, fans, behind-the-scenes crew and the entire Riot Fest team.

“Thank you, Riot Fest,” said Grace. “It is incredible to be a part of this thing.” 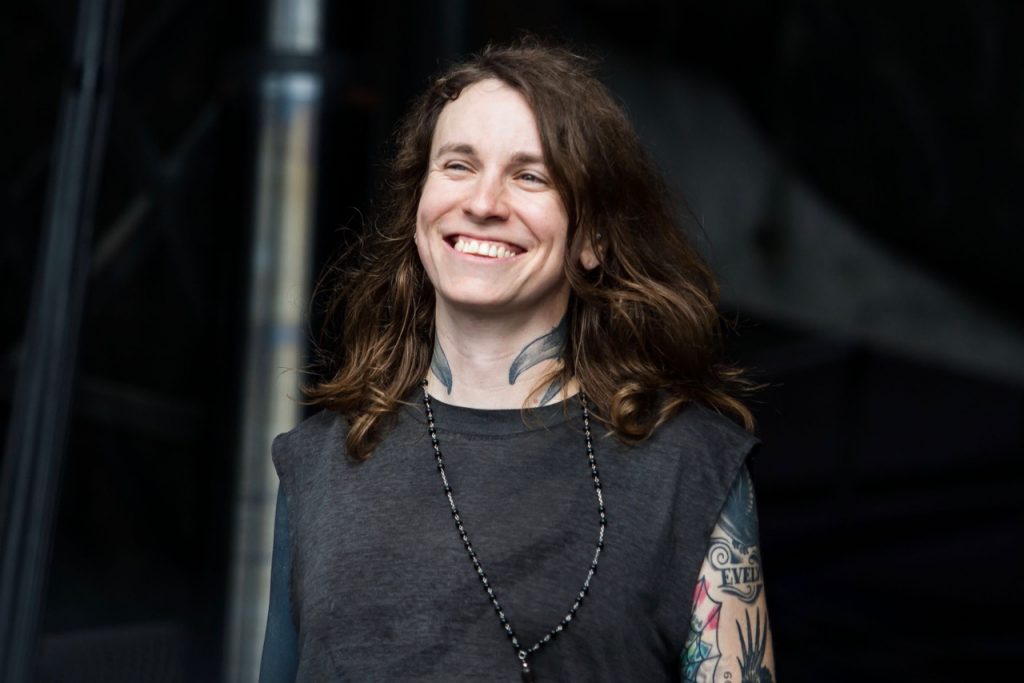 Grace kept the stage banter to a minimum, allowing each full album performance to unfold with increasing momentum. Fans across the field screamed the lyrics to Reinventing Axl Rose favorites “Pints of Guinness Make You Strong,” “We Laugh at Danger (And Break All the Rules)” and “Scream It Until You’re Coughing up Blood.” “Baby, I’m an Anarchist!” found crowd members swaying side-to-side and “8 Full Hours of Sleep” proved to be the calm before the storm of anthemic songs shared from Transgender Dysphoria Blues.

The album’s title track, “True Trans Soul Rebel,” “Unconditional Love,” and “Dead Friend” were all played with the ferocity of an encore. Each song found Drummer Atom Willard delivering an athletic onslaught of rhythmic fury, while Grace’s intensity encouraged fans to have the time of their lives from the start of the set to the cathartic conclusion of “Black Me Out.”

Elsewhere at Riot Fest, Cherry Glazerr kicked off the Rise Stage fun on Saturday with their unique brand of grungy punk while Caroline Rose’s alternative sounds were bathed in self-deprecating sarcasm on Friday. Save Ferris‘ Sunday afternoon set and a Saturday performance from The Selecter gave ska fans a chance to skank it up in Douglas Park. Pvris, The B52s and Chicago’s-own Ganser also delivered crowd-pleasing sets at Riot Fest 2019.

Riot Fest was held in Douglas Park from Sept. 13 to Sept. 15. More information about the punk party can be found at Riotfest.org.

(Slideshow below by Laurie Fanelli; click on each photo to advance)