See? #Notallmen have to write terrible female characters. Turns out, some can actually write a movie with something to say about gender, women, and how we react to female sexuality that’s also pretty damn funny. While “Blockers” was directed by a woman, it also has not one, but two male writers who manage to blend raunch and heart with some good social commentary, along with producers in comedy giants Seth Rogen and Evan Goldberg.

“Blockers” also features plenty of outrageous humor, but it quickly establishes that this is a movie about friendship first and foremost, with the connection between the trio of girls as the tender emotional center. They meet on their first day of school and instantly bond. And that bond is still going strong as Sam (Gideon Adlon), Julie (Kathryn Newton), and Kayla (Geraldine Viswanathan) prepare for prom. When Julie tells her friends she’s planning on finally having sex with her boyfriend on prom night, the other two decide they will also lose their virginity, even if Sam is reluctant due to the fact that she’s less attracted to her boyfriend than to a cute female classmate.

Sam and her father Hunter (Ike Barinholtz) are somewhat estranged, but she has a cool new stepfather in Hannibal Buress, and the other two have pretty healthy, close relationships with their parents. Leslie Mann plays Lisa, a single mother to Julie. Lisa is predictably having a hard time letting go, especially as her daughter is preparing to head off for college in L.A., rather than closer to home in Illinois. John Cena’s Mitchell is the stereotypically overprotective father to Kayla who is also coping with his own separation anxiety. So when they find out about the sex pact, Lisa and Mitchell are the most worked up, with Hunter desperately insisting this is none of their business. However, this is less due to decency than the fact that he knows his daughter is gay. But even he quickly gets into the blocking game once he believes Sam is intending to have sex with her boyfriend anyway in an attempt to stay bonded with her friends. 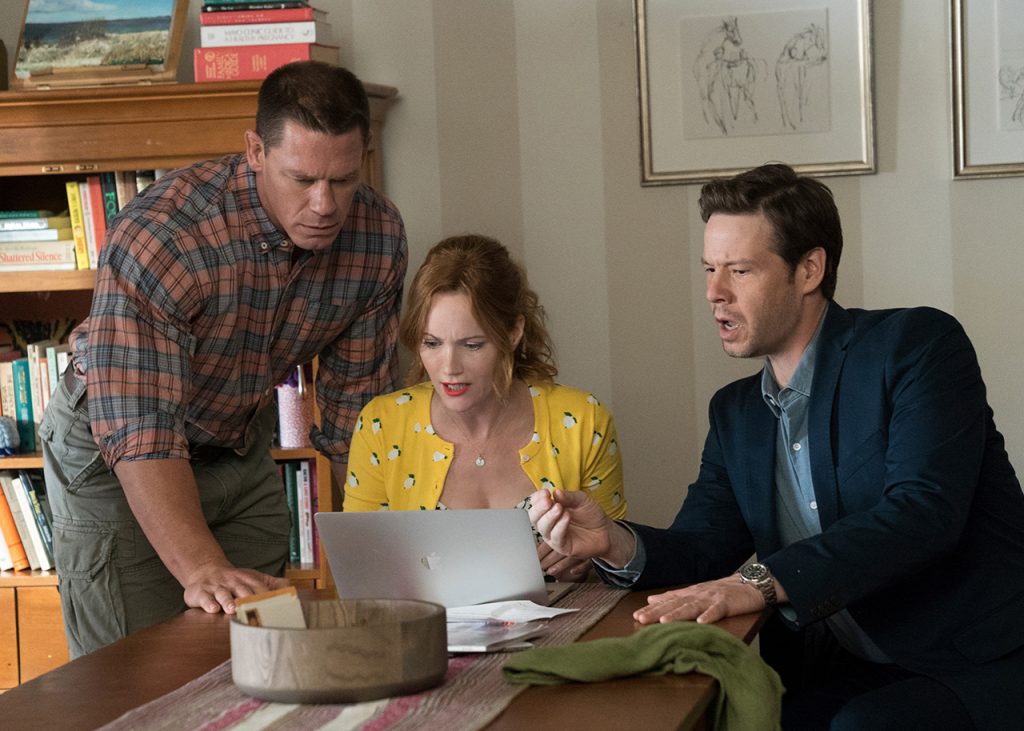 Nor does “Blockers” have any illusions about the potentially regressive nature of its premise. As Cena’s wife points out, it seems to be harder for parents to let go of daughters than sons. And not only are parents a lot more accepting when teenage boys have sex, it’s seen as a kind of loss innocence when teen girls partake. If parents can’t treat their daughters equally, how can we expect other people to?

The movie doesn’t get preachy or awkward thanks to Kay Cannon, the writer of the “Pitch Perfect” series who is making her directorial debut here, and it gets a great boost from the comic talent and chemistry between the adult leads. Mann especially shines in a role that takes full advantage of her many comedic gifts, while Cena proves his side-splitting supporting turn in “Trainwreck” was no fluke.

If there is a flaw in “Blockers,” it’s the fact that the movie can’t seem to condone teens having sex unless love is involved. I’m not saying that’s not a good idea, but it could stand to be a little more realistic about the fact that, much like adult sex, not all teen sex is going to involve deeper feelings. Movies like “Fast Times at Ridgemont High” acknowledged and showed this without judgment, but today’s movies just can’t seem to follow its lead. Given that this is such a thorny subject to discuss, let alone depict on-screen, I suppose “Blockers” can be forgiven for not getting everything right, especially when it’s so much fun watching so many talents, both established and emerging, strut their stuff. It respects both parents and kids (both male and female), while easily incorporating a gay love story into a studio comedy. Talk about revolutionary.

Andrea Thompson is a writer, editor, and film critic who is also the founder and director of the Film Girl Film Festival. She is a member of the Chicago Independent Film Critics Circle, the Women Film Critics Circle, and runs her own site, A Reel Of One's Own. She has no intention of becoming any less obsessed with cinema, comics, or nerdom in general.