I cried immediately after my first yoga class. It was 2008, and my teacher was so fit I swear he’d had a previous career in Cirque du Soleil. He wasn’t the only one. The class consisted of mostly women, and everyone was no larger than a size 2. I—decidedly not a size 2—struggled through poses, falling on my face and butt several times, sweating uncontrollably.

But several years later—stressed out and in need of forced relaxation—I did, only to see the same restrictive vision of the yoga body. Discouraged, I didn’t go back. In 2015, I found a new studio with students diverse in race, weight and gender—people far more interested in connection and living in the present than judging another person’s appearance. 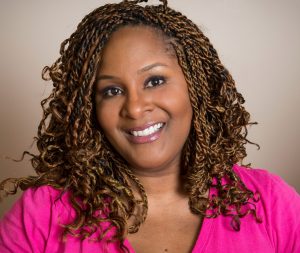 Around that same time, I stopped following celebrity yoga instructors on Instagram and switched my focus to teachers in the body positivity space. One of the first I found was Dianne Bondy (@diannebondyyoga), co-founder of the Yoga & Body Image Coalition, a collection of yoga teachers and advocates who promote “healthy body relationships” through yoga practice. I connected immediately with Bondy’s photos doing yoga because her body shape did not match the industry’s stereotypical vision.

Upon further investigation, I learned that Bondy is a speaker and activist, has contributed to the book “Yoga and Body Image: 25 Personal Stories about Beauty, Bravery & Loving Your Body”; and is the founder of Yogasteya, where she offers accessible and inclusive online yoga classes for people of all body types.

I called her at her home in Ontario, Canada, to hear her story.

KM: When did you start practicing yoga?

DB: I’ve been practicing yoga since I was 3 years old. My Mom had a yoga book and three kids under 4 years old. She needed to find a way to exercise quietly at home.

What kinds of messages about your body did you receive as a child?

As a woman of color growing up in the 70s, there weren’t a lot of role models that looked like me. My Mom lived in the culture of the Scarsdale Diet, which consisted of cottage cheese, cantaloupe and grapefruit. I was a fat kid, which was unacceptable to my parents. I was constantly shamed; my Mom put me on a diet when I was 8 years old.

How did body shaming impact you as you grew up?

I developed an eating disorder when I was in 8th grade. It framed most of my adolescence and young adulthood. My sister got a serious eating disorder, too. We would compete for weight. Honestly, even to this day I have to be conscious and filter the messages I take in. According to the media, what you look like is more important than who you are.

In my 30s, I got really into exercise. I was trying to achieve a size 0, 2 or 4 and had to work out two or three hours per day and eat between 800-1,000 calories. I remember passing out at a restaurant.

What was your breaking point?

I was having a hard time getting pregnant, and the doctor said I needed to gain some weight. I panicked because I was worried about being able to lose it after the baby was born. Everything changed for me when I got pregnant. I was 34 years old and realized that it wasn’t about me. I didn’t want to do something that would potentially jeopardize someone else’s life. It changed the way I looked at my body. My body became a miracle, and I realized that I should be honoring it.

How did you start your advocacy around yoga and body positivity?

I’ve always done yoga, but prior to me being a teacher, I was an accountant working 24/7. After my first son was born, I was able to take a year off and had the idea to do body advocacy work full time. I wanted to shift the culture and encourage people to love themselves. So, in 2005, I took teacher training and rented a space at a local church to teach yoga classes. People started coming, and pretty soon it was packed every day.

Did you ever get any pushback?

The response to my classes at the church was really positive, but in 2007, I did have an unfortunate experience. I’d had my second son and wanted to check out the oldest and most popular yoga studio in town for a lunchtime class. I remember going into the studio and the person behind the counter looking me up and down and saying, ‘You know this is going to be hard right?’

The teacher in the class was condescending to anyone not doing the exact flow she was instructing. I left and told myself that I was going to open a space where everyone would feel welcome. In 2008, I opened Eastside Yoga Studio in Ontario.

Do you still have that studio?

No, I sold it in 2014 because I was traveling and speaking on body image so much that I couldn’t be in two places at once. I now teach online on Yogasteya.

The yoga industry seems toxic to people who don’t fit a certain level of beauty. What are your thoughts on this?

The ideal of beauty in the yoga industry is seen as a person who is fair-skinned, highly mobile and white. If you see a person of color doing yoga, it is considered exotic. I’ve dealt with that my whole life, and it really formulates how you think about yourself.

You can’t talk about body image without talking about race. There are so many bodies that will never be considered beautiful or acceptable because they are not heteronormative, cisgender, fair or thin. Honestly, even people in that category don’t think they are fit enough. There is an ongoing battle to achieve an ideal that doesn’t exist.

How have you seen the yoga industry change since you started your work?

Positive change is happening. I recently went to a yoga studio for the first time in five or six years and was really nervous; I felt like I had PTSD symptoms because of the time when I was shamed in 2007. I walked into the studio, and the teacher gave me a hug. What a different experience! I think the trainings I’ve done and other teachers have done on inclusion in yoga are filtering into the community.

I’ve seen plus-sized runners on the covers of running magazines, the Embrace documentary was amazing, and the rise of celebrities like Ashley Graham is encouraging. These are things you wouldn’t have seen even five years ago.

That said, yoga is still very much impacted by the diet and fitness culture, and there is still a lot of body shaming going on. It’s strange to see because yoga tells us that what’s on the inside is all that matters.

There are changes in the body positive movement, and that is encouraging. I think we have to get over the hurdle of self-hate because it isn’t working. It’s been touted for a long time and it is time to try something else. It is time to step into our power.

Katie Morell is a thirty-something journalist based in San Francisco. You can read more of her work at www.katiemorell.com