Chicago-based, Boston-born comedian Alex Kumin uses comedy to empower women in every aspect of her life. Not only is she one of the most sought after – and most hilarious – stand-up acts in the Windy City, regularly performing with Lincoln Lodge, Parlour Car and more popular shows, she also uses humor as a tool to communicate with women at the rape crisis center where she spends her days doing social work. 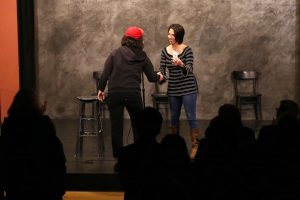 When Kumin first fell in love with stand-up, she thought she may have to choose between her passions – helping women and making people laugh – but she quickly realized that there is “an intersection” between the two. “It’s not punching down or using humor against the victim,” she said of incorporating comedy into social work. “But using humor against the system can make the conversations easier.” Hosting fundraisers, weaving social issues into her act and teaching Feminine Comique (Fem Com) – the all-female stand-up course that was created by Cameron Esposito back in 2008 – are other ways that Kumin is sharing strength through stand-up.

“I have really fallen in love with teaching the Fem Com class and watching the development of students,” said Kumin. “I think there’s a misconception that the class is there to teach people how to be funny, which is not what we’re doing. We’re there to give tools to people to help them find their comedic voice.”

Each five-week course culminates with a graduation show, where students of all levels and experiences take the stage for the very first time to showcase their individual styles. From there, Kumin hopes that each Fem Com student will continue down their comedy path by performing at open mics and other shows around the city despite the fact that clubs and bars don’t always foster the most women-friendly environments.

“With Fem Com, you get this cohort of classmates and a network of people who already graduated from the class to go out and go to mics with and start shows with and continue to find your voice that way,” she said.

Kumin is also involved with another Chicago comedy community as a cast member of The Lincoln Lodge, the nation’s longest-running stand-up comedy show.

“It’s a really cool thing to be a part of a comedy institution that’s been around so long and has been involved with developing T.J. Miller, Cameron Esposito, Hannibal (Buress) and Kumail (Nanjiani) and all these big names that you’re seeing now on HBO and everywhere,” she said. Currently, The Lincoln Lodge – which is produced by Tight Five Productions – packs the SubT Lounge every Friday at 8 p.m., but the group is currently engaged in a fundraiser to find a permanent home.

Head over to TheLincolnLodge.com to pick up tickets to a show or make a donation and check out FeminineComique.com to learn more about Kumin’s Fem Com class, which is kicking off new sessions at Center on Halsted this April and at the AMFM gallery in Pilsen in May. More information about Alex Kumin can be found at AlexKumin.com. 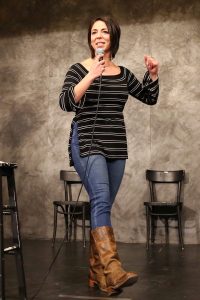 What makes you laugh?
My brother is one of the funniest people – both of them actually are really hilarious. I also love very subtle humor like a comedian delivering a line and adding a slight nod of the head as an accent. For whatever reason, that always gets me. Any physical Molly Shannon or Chris Farley type of humor always is really good, too.

Do you have a favorite joke either that you do or you love from another comedian?
There are so many. It’s so hard for me to narrow this down. There’s a local comic, Cleveland Anderson, who has this hilarious joke – I’m not going to say it word for word because I’ll butcher it – but he has this incredible joke about rappers from Canada that just makes me lose my sh*t every time I hear it.

What establishments or landmarks would you recommend for someone to visit in Chicago?
Longman & Eagle in Logan Square has unbelievable food, and Green Mill Cocktail Lounge for The Paper Machete is always, always, always a top recommendation for me.

Do you have any comedy recommendations to share with the world?
There are so many comedians I love right now – they’re pretty well known – I love Aparna Nancherla. I love Rory Scovel. I love Tig Notaro. Those are kind of like the people who anything they say I will listen to. In terms of clubs, working at the Comedy Attic in Bloomington has always been a real treat. It’s a really fun club, so if you’re down Bloomington way, go check that out. Parlour Car on Thursday nights is also a great show.

What makes you Rebellious?
Talking about things that I’ve been traditionally told that women shouldn’t talk about makes me rebellious.