Brittany Meyer could easily be considered fearless. They regularly tackle topics like misogyny, equal pay and LGBTQAI+ rights with a cutting honesty that can produce pushback from any number of oppressive forces. Personal, social and political vulnerability are exposed in each and every one of Meyer’s hilarious stand-up sets.

On second thought, fearless isn’t a strong enough word. This gutsy approach to socially conscious comedy is, in fact, brave.

Whether performing at stand-up shows across Chicago or hosting the body-positive showcase Strip Joker – which features comedians shedding their clothes and baring their souls – one of Meyer’s greatest assets is a disarming smile that amplifies their underlying strength. “I think what’s empowering about stand-up is the only role you’re expected to play is yourself. You’ve picked every facet of it, so you’re not conforming into anybody else’s expectations at that point,” they said prior to performing at the Graham Crackers Comics’ show, RAD, in June.

Meyer’s comedy career began almost six years ago when they moved to Chicago from Florida – where they grew up – and started performing at a few open mics, but it was after learning the fundamentals of joke-telling at The Kates University, that they came into their own on the stand-up stage. “Kelsie Huff was explaining a joke to somebody about why something didn’t work, and it all hit me,” they explained. “It was like, ‘This is what I’ve been doing wrong.’ Ever since, I’ve known I can write something and know it works.” 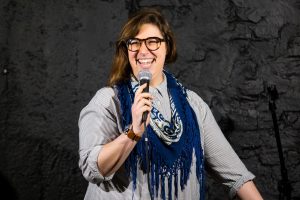 Inclusion, integrity, vulnerability and boldness are now at the heart of Meyer’s masterful comedy, and their welcoming, happy delivery encourages fans to take in their message while laughing along with each joke. “When I grew up, I had a lot of body issues – and still do – that I’m overcoming,” they said. “Once I started writing more jokes about what I look like, it was easier for me to think, ‘this isn’t necessarily a bad thing.’ It provided a more fun way of looking at it. It became a good release for me.”

This idea of empowerment through vulnerability and acceptance was the catalyst for Meyer to start Strip Joker – which can be seen at Uptown Underground on the second Saturday of the month – and the show has grown to become one of the most popular stages in Chicago for fans and comedians, alike.

“It’s been surprisingly nice because, I guess, I didn’t know what to expect out of the show when it first started, but when I talk to people – both who have performed and been in the audience – everyone has a unique experience and has pulled something away from it.”

Along with Strip Joker, Meyer is also a producer of Tuxedo Cat Comedy – Rebecca Fass’ hilarious stand-up show that runs on the second and fourth Tuesdays at Beauty Bar – and competes as Stone Cold Jane Austen in the Chicago League of Lady Arm Wrestlers (CLLAW). “I’ve been doing CLLAW longer than I’ve been doing comedy,” Meyer explained. “I love professional wrestling. I love the theatrics and the comedy of it. CLLAW is a lot of fun.”

On top of all of their own projects, Meyer has a passion for making the comedy scene a more inclusive place. “When it comes to booking, the first consideration is always what will our audience like,” Meyer said. “We try to book – for both Strip Joker and Tuxedo Cat – female-identified comics, non-binary comics and people of color, so they always get priority. And sometimes we take risks with super-alt comics. It’s always worth giving them that opportunity.” 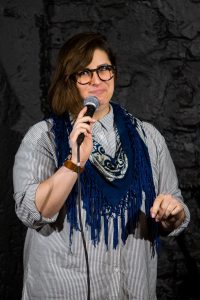 It’s gotten to a point now where I can’t laugh if I watch a video of stand-up comedy. I’m just studying it for the most part and seeing what’s working. Also, I feel if I’m not there in the moment, I don’t really enjoy it.

So, what makes me laugh? Definitely, Nathan Fielder. He does alt-comedy. It’s something I’ve noticed I really like. On the show tonight, there’s Sarah Squirm and The Shrimp Boys, and they’re completely alt. I’ve come to enjoy that because it’s not at all the joke style or structure that I think of. When it’s things like that – that surprise me – that’s when I really laugh. That’s my favorite.

There’s plenty. My co-producer Molly Kearney has a really great joke where she talks about where she is on the Kinsey Scale. She’s like, “There’s guys here, and I’m on the end of the Kinsey Scale that is so far, it’s this deep lesbian forest. I’m so deep in it.” And she talks about, how there’s hammocks and they’re all grilling and she says, “Usually in the middle of the night, we go into the forest and call out to all the other bisexuals and pansexuals and we do this lesbian call.”

She used to do like a call, and now she does the 4 Non Blondes, “Hey, yeah, yeah.” And it kills me every time. I love that joke so much.

Another one of my favorites is from Joe McMahon. He’s a straight white guy – very funny, though – and really great. He has a joke where he talks about how he looks like he’s full of plums. He has really fun ways of looking at himself.

Lucas O’Neil – who’s also a great, straight white guy – does a lot of really funny jokes. He’ll talk about how, “For a straight, white guy, things don’t seem to be going as well for me as the media makes it sound.” He’s very self-aware and he’s very much courteous to queer people and women. He’s great.

The boat tour is the best thing. Do that. I had a friend in town and I took her. That’s the best.

Pequod’s Pizza is the one, and I always recommend going to an Eataly or something that is nice and fun that’s downtown.

Check out the neighborhoods because after the Great Chicago Fire everybody moved out there. They stay with their ethnic class, which is why we have this hyper-segregation. You have to go to Lincoln Square and definitely Pilsen. Logan Square, especially for nighttime and hanging out.

I also highly recommend – if you get the chance – go to the south side. Even just going out to Rainbow Cone or the Calumet Fisheries or checking out Hyde Park. It really is beautiful. The Museum of Science and Industry is so great and now they have a Pixar exhibit, which is really sweet.

Driving down Lake Shore Drive is also great and going up to Little India on Devon, is really wonderful.

In Chicago, there’s a really great show called Ladylike that a bunch of really rad women run. The idea is mostly female and non-binary people tell gross stories about their bodies in whatever capacity they choose. That’s always a really fun show.

Every Thursday there’s always Cupcake Cabaret, and they do a really good job of bringing people together. They have an open mic and free cupcakes, which is really sweet. I love RAD in particular. It’s a really great show and so is We Still Like You every first Saturday of the month at the Flatiron Arts Building.

The fact that I’ve been doing everything that I’ve wanted to do despite people saying I shouldn’t or it’s against what I’ve been raised to believe or been told growing up. I’ve been trying to make my own way whether it’s humor, dealing with my body or whatever it may be.