Tackling serious issues is at the heart of Caitlin Checkeroski’s comedy. She uses laughter as a way to prove a point while encouraging people from all walks of life to examine issues like feminism and equal rights from a new perspective. Her comedy has the power to take the edge off of tough subject matter and level the playing field whether the laughter is generated through high-brow one-liners or silly characters.

“If I’m able to get someone to laugh at a subject matter, I feel like they must partially agree with me,” Checkeroski said during a September phone interview. “If I’m pointing out the fundamental inequalities between men and women, it helps if you’re laughing. You can be like, ‘Yeah, it’s awful,’ but at least now we’re all acknowledging it together.”

“Laughter helps to make everyone a little more relaxed so we can all notice the absurdities in these things, but also not be terrified of them,” she added.

Checkeroski channeled this unique method of silly and serious when recording her debut comedy album, Character Building, at Schubas Tavern on Sept. 9. As the title suggests, the show was peppered with character-based comedy inspired by Checkeroski’s family and the singular creativity of her imagination.

“There’s a lot of characters in it, and a big one is my dad,” she explained. “That’s a favorite. He’s definitely a kooky guy. There’s a lot of dad stuff, and you won’t find anything like him elsewhere. Other people might think their dad is crazy, but my dad is like actually crazy, and fun.”

Her mom and sister are also included in Checkeroski’s comedy, as is her beloved dog Oscar. “Oscar is kind of a big deal. He might be bigger on the scene than I am. He’ll go to open mics, and he’s been to shows, so he’s grown up around comedy,” she said with a laugh adding. “A lot of times I’ll use kooky characters to balance things out that are more on the serious side.”

This blend of serious and silly is also at the heart of “Don’t Kid Yourself,” a comedy and sketch show that Checkeroski presents at Volumes Bookcafe. “The thing that I love talking to people about the most is their childhood. It’s a universal thing between everyone regardless of how different or similar someone’s experience was. And, being a kid is inherently silly,” she said. “We have a theme every month that could be anything from accidents you had as a kid or gifts or sleepovers. You think everyone’s story is going to be similar and it totally is not. We’ve had some of the craziest stories.”

Checkeroski’s personal comedy story began while attending the University of Michigan. It was there where she fell in love with the relatable stand-up stylings of Gary Gulman and the utterly original hilarity of Maria Bamford. “I guess I had never seen something like that before with her [Bamford] voices and acting out very vivid scenes with just herself,” she said. “It was life-changing for me.”

When describing her own style of stand-up, Checkeroski references her love of debate and providing enlightening arguments.

“If you laugh at a joke – any topic – there’s a part of you that agrees with me. I’m like a funny lawyer just trying to spread my gospel here.” 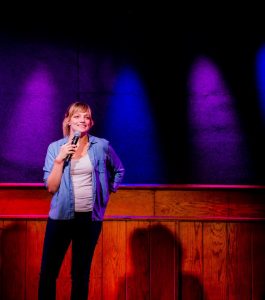 Things that surprise me definitely make me laugh. Even if no one else is laughing, if I find it funny I have to laugh.

Also my sister Jess. She’s dabbling in stand-up. This is a side note, but she came to me the other day and did an impression of Matthew McConaughey trying out for Benjamin Button. It’s so funny because she has this whole preparation and then says, “I keep getting younger and they stay the same a– they keep getting older.” Stuff like that. I think she’s totally brilliant, and it’s so weird that I love it. I think sometimes people who aren’t comedians are the funniest people.

I always love saying that because it’s something that is so small and points out one of those things that as a woman you don’t always notice. I think it’s a good thing to point out. It’s something that I believe in, but to make it more palatable, it’s much easier to laugh at something.

I was in Andersonville for a long time so part of my heart is there. I always feel like when people visit Chicago it can be overwhelming, and I recommend that people take some time and go check out a neighborhood, like go check out Wicker Park or Andersonville. People have this idea that Chicago is a fast-paced city, but most of us live in little neighborhoods with their own style.

I also always tell people to go to a park. Go to Humboldt or Winnemac. Go to a place where you can just hang out. I love the park. Well, mostly because of my dog Oscar. It always comes back to Oscar.

I would recommend that people watch Gary Gulman and Maria Bamford if they haven’t, but they should have.

I feel like doing stand-up is my rebellious thing. Everyone in my family was like, “You’re going to be a doctor,” and then I decided, “Nope, I’m going to do goofs on stage.” That is probably the most rebellious thing I’ve done, going against people’s expectations and continuing to plug away at something I love.

There’s a lot of opportunities to say, “Well, I’m just going to do something that I don’t care about.” Doing something you love shouldn’t be a rebellious act, but it is in our society.