Chicago-based comedian Denise Medina doesn’t let anything get in her way. When scheduling difficulties prevented her from continuing with improv – she started doing stand-up. When there wasn’t anywhere to perform in the suburbs – she produced her own shows. The 50-year-old mother of two continues to prove that she is only limited by her own ambition, creativity and drive, none of which show any signs of slowing down.

“I’m at an age where women are told, ‘Sit down and be quiet. You’re not relevant any more.’ And 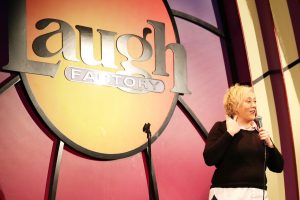 now, I’m doing stand-up. I turned 50 last year, and I don’t let that stop me. I feel the same. I still feel youthful and, as long as I have my health and I’m feeling good, I’m going to continue to explore all of the adventures that life has to offer. I just want to keep doing what I’m doing.”

Medina got her comedy start performing improv with the Players Workshop at Second City under Josephine and Linnea Forsberg. Following a move to the suburbs where she started her family – she now has two daughters ages 12 and 16 as well as a supportive husband – she found herself yearning to get back on stage. “I thought it would be easier to do stand-up – Ha,” she said. “At least in the sense that I could write anywhere, and I could write alone. I didn’t have to schedule time to go somewhere to work with a group of people.”

Enrolling in a stand-up comedy course instructed by Kelsie Huff led Medina to a group of like-minded women in the kates – the all-female comedy showcase created by Huff – all of whom offered support, feedback and guidance as she honed her craft as a stand-up comedian. “I can go to any of these ladies for anything at anytime,” Medina said. “They’re there for you. They’re pulling for you. And that helps you build your confidence. It helps you in your writing and your performing, just knowing people are there to have your back. And it’s nice to be able to have people to brainstorm with and get honest feedback.”

Now a full-fledged member of the kates cast, Medina regularly performs with the group. She also produces and hosts her own shows in the northern suburbs. “The market isn’t saturated here in the suburbs, and I wanted to create an opportunity for people to have more options for something to do after they go out to dinner at night,” she said.

Madame Zuzu’s Tea House in Highland Park and the Improv Playhouse in Libertyville are two locations where Medina previously co-produced shows. In the not-so-distant future, she’s teaming up with fellow comedian Heather Morgan to produce a monthly show in Grayslake.

The kates are also returning to the stage – following a summer hiatus – with a Sept. 8 and a Sept. 30 show – hosted by Medina – both at the Book Cellar. The all-female comedy collective is also performing at the Improv in Schaumburg on Oct. 12.

“We always have a fabulous lineup,” said Medina. “That’s one of the things I love about the kates is that the shows are always different every time. You never see the same show twice, so it’s a really wonderful opportunity to see so many different people doing so many wonderful things. It’s very inspiring.” 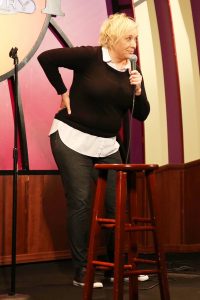 What makes you laugh?
Quirky bizarre things – I know everybody else is probably familiar with her and I’m late to the party – I love Maria Bamford. I just love her silliness and her quirkiness. I love her material. It’s a little off beat. I also love when people tell stories and act it out. Lately, I’m also watching Sebastian Maniscalco. I love the stuff he talks about because it’s stuff we can all relate to, and he turns it into a quirky personal thing. I love it.

Do you have a favorite joke either that you do or you love from another comedian?
The joke that I do lately that I love telling is that, “I’m not old but I did have to give up twerking. Because I thought it was tweeting from work. I told everyone that I’d been doing it all day and that I’m addicted. I even offered to twerk for my boss for extra pay.” People seem to enjoy that one, and I just love to tell it.

I love the kates so much, and it’s so hard to pick just one joke. I love watching Amy Sumpter perform. She talks about falling in jokes, only the way that Amy can tell it. Or Alexandra Tsarpalas with her tiny hands. And all of Kelsie’s bits. I like when she talks about texting and emailing with her mom. It’s wonderful, I just love it so much. Also Kat Herskovic’s joke. “My boyfriend loves donuts more than he loves me. You know how I know? Because he told me he loves donuts.” She has tons more but that came to mind first.

Maria Bamford’s bit about Joy Whack-A-Mole where you bring up something fun and it gets countered with a negative aspect about it. Also her joke that goes, “I wish they would provide recipes for food you can get at the gas station. Have you ever had a gas station tuna fish sandwich? Oh my God, it’s so good cause there’s no tuna in it.” I don’t like tuna, so that really made me laugh when I first heard it.

What establishments or landmarks would you recommend for someone to visit in Chicago?
Navy Pier because of the people-watching and the restaurants. It’s a Chicago thing to do down by the lake. I’m picturing a nice sunny day, going on the Ferris wheel and seeing the boats in the water. It’s a lot of fun.

Do you have any comedy recommendations to share with the world?
Of course the kates. I profess my love to them so much because I feel like they do so much. Kelsie is amazing. She’s a fantastic mentor. I guess one of the reasons I hype her so much is because I never really had a mentor growing up. I wish I would have found her 20 years ago, but she was probably still in kindergarten or something.