From performing sketch comedy at Second City to burlesque dancing at the Annoyance Theatre to generating laughs on the stand-up stage, Jillian Ebanks has comedy covered. She pushes herself to find the funny in every space with any medium necessary, and the results are hilarious.

Not only has Ebanks risen to become one of the funniest people in Chicago, she has also blazed a trail for others as one of the producers of the popular variety show B.A.P.S. (Beautiful And Powerful Sisters) Comedy.

“B.A.P.S. is a comedy collective produced by me, Adrienne Brown and Adrienne Brandyburg. It’s our baby,” explained Ebanks prior to performing at Second City last month. “It’s something we’ve created together. It started when we felt like there was a lack of shows produced that were including women of color, specifically black women, but also other POCs. I remember when Adrienne Brandyburg and I first did a show together, it was the first time I’d ever been on a lineup with another black woman.”

In B.A.P.S., Ebanks and her “guardian Adriennes” have curated a show with the intention of spotlighting other talented women rather than creating opportunities for themselves to shine.

“It’s more important for us to have a space where other women can headline,” Ebanks said. “By putting other women on, we’ll also put ourselves on. We’ve had comedians, poets, dancers, singers, and it’s a really cool show because it wasn’t about us. We would host it, but we weren’t the headliners.”

Born and raised in New Jersey and born-again as a comedian at the UCB Theatre in New York City, Ebanks was inspired to move to Chicago over four years ago to pursue her love of humor at Second City.

“I didn’t know anything. I didn’t know where to begin,” Ebanks explained. “I didn’t know how to create a sketch so I wanted to come to the place where it all started. I didn’t know if I was going to stay. I moved on Memorial Day and I had a return ticket for Labor Day.”

She stayed and worked her way through Second City classes, was accepted into the conservatory 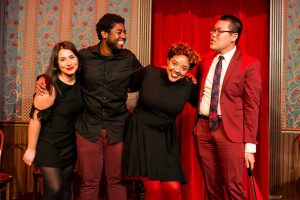 program and was ultimately selected for a Bob Curry Fellowship. Ebanks is now performing with Urban Twist every Friday night through the end of the year. The extremely popular show features original material and select classic sketches from the Second City archives.

Ebanks is also performing stand-up at Second City in The Flanders Holiday Comedy Extravaganza on Dec. 7 and Dec. 14. Having the opportunity to express herself via stand-up and sketch only further amplifies Ebanks’ voice and vision.

“A sketch show is awesome because you know your teammates have your back and you guys are in it together. You don’t have that in stand-up so if you’re bombing it’s you, but there’s also a level of satisfaction when you have a good stand-up show and it’s all your doing.”

Ebanks doesn’t have a competitive bone in her body. That’s not to say she isn’t motivated to continually push herself into new places, she is, but she does so with a collaborative spirit that is enthusiastic about the art being created by her friends and peers. 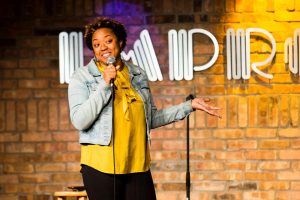 Memes and gifs. Also, intersectional jokes. Like when people cross two TV shows in a joke or there’s a “Harry Potter”/”Game of Thrones” reference. Those are the jokes that make me happy. I can nerd out on multiple levels.

ABC TV shows make me laugh, and I love Twitter. I absolutely love it. I think I have the most fun on Twitter.

Good comedy and clever stand-up. When I can’t tell where the joke is going and they shock me, that’s when I’m like, “whoa.” And my sisters make me laugh, too.

My favorite joke that someone else does that is still funny to me is Dave Chappelle – in the first special he released on Netflix – has a five-minute joke about Kevin Hart and his son. It’s him going to a Kevin Hart show and being jealous because everyone’s laughing and Chappelle’s son worships Kevin Hart.

Also, Def Comedy Jam hosted a special and there is a 15-minute clip of D.L. Hughley and Dave Chappelle going off script, and it is the best. I regularly watch it. Those are my favorite jokes to go back and watch right now.

In the show we do here at Second City, there’s a song I wrote about eggs and it’s my favorite thing I’m performing right now. And in my first burlesque monologue I did, I told the plot of “Game of Thrones” with today’s pop culture references so you didn’t realize it. I was talking very frankly about “Game of Thrones” characters, but through Harry Potter and Beyoncé and weird stuff. It was a very nerdy monologue, but if you got it, you got it. It’s my favorite thing I’ve ever written because it’s so weird and it makes me so happy.

I didn’t know that I had so many favorites. Now I’ve answered the question too much (laughs).

You gotta get French toast and brunch at Batter & Berries and, if you want cool ambience and really cool cocktails, Big Star. It’s a tourist attraction, but if you’re visiting here and you’re a tourist that’s where you need to go. You need to get the gentrified tacos and the really cool drinks. If you live here, you don’t need to go there, but I always take tourists there and they love it.

And Irazu, a Costa Rican restaurant in Logan Square. It is delicious.

So, brunch at Batter & Berries, drinks at Big Star, dinner at Irazu and snacks at Uncle Remus.

My favorite comedies I’m watching right now are “Black-ish,” still, and this new show “Single Parents” on ABC which is hysterical. And “Insecure.” OK, we need to put “Insecure” at number one. If you have not watched it yet, “Insecure” needs to be first.

“Insecure” and Ali Wong are the number one things you should be watching right now.

Society norms. I’m a black woman from an immigrant parent and immigrant grandparents. You know, there’s a lot of people who would like me to take on a different role, but I’m going to be a performer and a fearless performer. I’m going to say what I want and offend people and upset people and I’m not going to do all the things that are expected of women. I want to do more.

I think I’m constantly trying to challenge what a black woman looks like, what being a performer looks like and the norm of what’s socially acceptable of a “good woman.”