When you get the opportunity to spend time with Kelsie Huff – the host and creator of The Kates, an all-female comedy showcase that has kept Chicago laughing for about a decade and counting – it is easy to see how she has amassed a Rolodex filled with the names of more than 600 women who have performed during her shows. Her energy is infectious. Everything from her playful and inviting language – “jokers,” “clown town,” “rascals” and “love your face” are just a few favorite terms – to her warm disposition makes you want to smile. 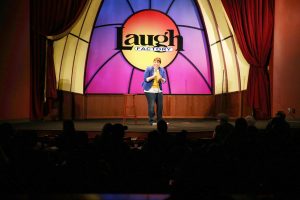 “I would never have known that it would grow like this when we started,” she said of the origins of The Kates. “It was me and 12 friends on rotation.” The Kates got its name from the first venue that hosted the showcase, Kate the Great’s Book Emporium. Today, you can find Huff and the current hilarious cast (Adrienne Gunn, Alexandra Tsarpalas, Amy Sumpter, Brittany Meyer, Denise Medina, Elizabeth Gomez, Mona Aburmishan and Soli Santos) regularly performing at The Book Cellar (Second Fridays & last Saturdays), Laugh Factory (First Thursdays) and at various pop-up shows across the city.

Along with being one of the premiere comedy showcases in Chicago, The Kates also offers a variety of classes. “Alex [Kumin] is crushing it with Fem Com, and I wanted to expand and do a little bit more than stand-up,” Huff explained, as she was the former teacher of the popular Fem Com class. “The Kates University is all-female stand-up classes – that I still teach – and then there’s a storytelling class as well. Also, the cast – because they have all these unique skills that I don’t have – they are going to be teaching workshops.” Adrienne Gunn offers advice on getting a master’s degree in a weekend, Alexandra Tsarpalas shares tips on developing comedy characters, and other cast members share their knowledge on website building, networking and more.

The Kates is a Chicago institution, but Huff often brings the show on the road, giving her a unique perspective on the countrywide demand for female-led comedy performances. “There was a definite need when we went to these small towns in Ohio and elsewhere. Women were jonesing for this,” she said. “Women needed a space, and they didn’t have one in their town, so our goal is to spread to other locations and use YouTube to reach farther.”

Huff may be the busiest woman in Chicago. On top of producing The Kates shows – which regularly host a variety of hilarious Chicago comedians in addition to its talented cast – she vlogs daily, her web-series “The Open Mic” drops new episodes on Tuesdays, and she explores her ongoing aversion to “The Bachelor” with a weekly podcast “Pedals and Pricks” each Thursday.  “The Open Mic” is co-written by Daryl Moon and directed by Huff’s husband, Jason Madeja.

“It’s torture to watch it [The Bachelor], but I really love talking to Jonah [Jurkens] about it because I always like to point out gender issues and how women don’t really treat each other that way – at least in my life,” she said. “It’s a real piece of garbage that show. All my friends love to hate it.”

When it comes right down to it, Huff loves to challenge herself creatively – always looking for the light in darkness and the funny in painful vulnerability – and comedy fans are reaping all the benefits. Head over to KelsieHuff.com to stay up to date on all of her incredible projects

What makes you laugh?
I’m such a dork. I love when people fall down, and I love when they fart. Real basic. I would like to pretend to be classy and suave, sophisticated and educated, but nope – farts!

Do you have a favorite joke either that you do or you love from another comedian?
Alexandra [Tsarpalas] does this weird prop comedy thing with these tiny hands, and I’ve seen it a bunch, and I lose my sh*t every time. So that’s one. Also, nostalgically, we only had one VHS tape in my house as a kid, and it was Eddie Murphy’s “Delirious.” Him talking about his dad makes me crack up to this day. A drunk dad – are you kidding me? – that’s my jam, Eddie Murphy.

What establishments or landmarks would you recommend for someone to visit in Chicago?
This is so cheesy, but if you are ever staying here for a long time, you have to go to Harvestime, which is a grocery store – I know that’s lame (laughing), but I would live there if I could. If you want to go grocery shopping, you go to Harvest time.

You should go see “Strip Joker,” it’s a really great show here that Brittany Meyer produces. It’s a really different show, and it’s a body positive comedy show. It’s crazy vulnerable, and it makes me uncomfortable in the best way. It’s something that you wouldn’t know about if you were a tourist, but it’s a top-notch show here in Chicago.

Food-wise, I’m going to sound so bougie. I got a gift certificate to Elizabeth Restaurant, and that was amazing! I’ll never be able to eat there again, but if you have extra money, you should go to Elizabeth, for sure.

And the Book Cellar. That’s where I buy all my books.

Do you have any comedy recommendations to share with the world?
The specials that influenced me the most – and I would say that everybody should watch – are by Eddie Izzard and Margaret Cho. Anything by Maria Bamford is frickin’ amazing. I really love the Netflix show, “Chewing Gum,” that is amazing. Nerd, religion, race, sexism, class – everything you want is in “Chewing Gum.”

Locally, of course, I’m going to say my own show because I’m the worst (laughs). The Lincoln Lodge has really good, weird shows. There’s a storytelling show called “We Still Like You.” You tell your most horrible story, and they’re usually really funny, but awful stuff. At the end, everybody says, “We still like you,” so there’s this real camaraderie thing about it. Also, I would watch Rebecca O’Neal every second of every day, so any shows she’s in.

What makes you Rebellious?
I think this is a general thing, but I’m such a brat. It’s not always the best that I do this, but I hate when anyone tells me what to do – even if it’s for my own good. I’m like you can go f*ck yourself (laughs). Isn’t that terrible? That’s not rebellion, that’s just being a brat. I don’t like being told what to do. I really don’t like it, so there’s that. And, sometimes I don’t brush my teeth – what a rebel (laughs)! I’m rebelling against my dentist.