It’s no surprise that Kristen Toomey is a staple on the Chicago stand-up comedy scene. Her incredibly expressive face, hilarious punchlines, and candid jokes about family, friends and life in the Windy City have garnered her loyal fans as well as rave reviews from everyone who has had the pleasure of seeing her perform live.

Despite being one of the funniest comedians in Chicago, Toomey often faces her toughest critics in the most unlikely of venues… her own home, where her two kids and her husband are all comedians in their own right. “We have a funny household, but I would probably rank myself the least funny based on a laugh-per-minute ratio,” Toomey said. “My husband is very funny. He’s from Ireland, so he’s got a very quick wit. I swear everyone in Ireland is a comedian. Nuns are even comedians. Everyone’s so quick and so funny.”

Toomey strives to strike that perfect balance between family life and her comedy career, which is often easier said than done. “That’s definitely something that gives me some pause,” she said. “That is the struggle. Am I showing my children a good example or am I being selfish, which is what most people in society would view it as, especially the older generation or people who gave up on their dreams. There’s a lot of judgement.”

On stage, Toomey’s stand-up is steeped in honest-to-goodness hilarity. Fans lose themselves in fits of laughter at her jokes about the effects of wearing tight jeans while driving on Western Avenue or her enthralling experience of attending elementary school talent shows. The openness and candor that make her beloved by fans have at times been a source of reflection for the comedian when it comes to her children, who recently discovered that they can watch her stand-up videos online.

“My whole goal in life is to balance not giving up on my dreams and not giving up on my family,” said Toomey. In this vein, she fearlessly propels her life forward opting not to choose between her career and her home life, rather focusing on having it all. “The things I say up there on stage aren’t for them [her kids], they’re for me and people like me who can relate to it. Or for people who just want to laugh at it because it’s stupid or whatever,” Toomey explained. “It’s not intended for them. I hope that someday, they can appreciate it for what it is and kind of see it as a third person up there on stage.”

Of late, Toomey has proactively been guiding the direction of her career – following in the footsteps of her idol, Lucille Ball – as a successful comedian and businesswoman. “There’s just something about Lucy. She was in my opinion, and still is, the greatest clown there ever was. She had the red hair and the red lips to match and she was gorgeous and fearless and brave. She was a CEO. Business-wise as well as in comedy, I’m inspired by her,” she said.

Along with co-hosting the weekly Laugh Factory Network podcast, “BUTTHURT” with her friend and fellow comedian, Danny Rhodes, Toomey also recently released a free EP, “Ostriches,” for fans to enjoy. She previously co-founded Hoo Ha Comedy and worked as the first female producer of Comedians You Should Know. She is now using her experience, intuition and gut to guide her career and forge a new path for herself.

“You need to take the reins yourself and help your fellow woman. You’re not going to break any ceilings by yourself,” she said. 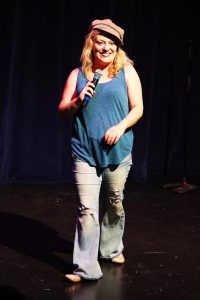 What makes you laugh?
I laugh all the time. I would say, for a comedian, I laugh a lot. Danny [Rhodes], my best friend and co-host, definitely makes be laugh. I mean, I even pissed in his car a couple weeks ago because we were laughing so hard. He makes me laugh so hard. He’s the funniest person alive.

Do you have a favorite joke either that you do or you love from another comedian?
It’s the dumbest thing. I don’t even know the whole joke, but the pun – of course it’s a pun – “just for the halibut” (laughs). If there’s halibut on the menu. I will say that and I will get the halibut just for the bit. I gotta have the “hali-bit.”

What establishments or landmarks would you recommend for someone to visit in Chicago?
You gotta get a beef with hot peppers, dipped – or sweet peppers if you’re a p*ssy. Go to Portillo’s or Al’s Beef. You need to get a beef. If you can, go to a Cubs game and then leave the area immediately and go to Northerly Island and chill in the area by the Planetarium. It’s beautiful over there.

I would skip the fountain and skip the tower, just Google pictures of them. Definitely see comedy while you’re here. I would go to Laugh Factory and come see me.

Do you have any comedy recommendations to share with the world?
“George Carlin: Jammin’ in New York,” it’s his ’92 album. I was listening to it the other day and it could have been recorded today. It’s almost prophetic, so listen to that. And listen to Lewis Black, Richard Pryor and all of the philosopher comedians. They are timeless, and their comedy literally applies still today, in a lot of cases. It’s pretty fascinating and they’re all hilarious, too.

What makes you Rebellious?
Everything. Any kind of rule or authority, I hate. I dropped out of school. I never liked school because I thought that it was bullshit that everybody was learning the same thing when we’re all so different. It didn’t make sense, and I was dyslexic – in the ’80s they didn’t know what that was – I just tried to be funny, which always got me in trouble.