Laughter is the same in every language. Just ask Chicago-based comedian Mona Aburmishan, who has traveled the globe spreading joy with her socio-political comedy. Whether performing in South Africa, Palestine or New York City (Aburmishan is the first Arab, Muslim woman to perform stand-up at Carnegie Hall), she unifies audiences without shying away from tough issues.

Aburmishan has a unique talent for zeroing in on the universal humanity of any given topic, which creates an aura of communion whenever she takes the stage. “The reason I always loved stand-up comedy is because it’s the truest, most transparent form of lovable, optimistic social activism,” she said. “You say some heavy stuff, but people are left feeling great.”

When joking about her own life, Aburmishan finds that a connection is fostered not only between audience and performer, but also with individual members of the crowd who share a sense of humor.

“I notice that audiences want to connect with one another, and all audiences want you to be the heroine. They really do. When I talk about my weight loss, anyone – black, white, straight, gay, everyone – anywhere in the world, wants to hear that conversation.”

“Everyone is also intrigued by the fact that I’m Palestinian and I’m Muslim. Stand-up is this beautiful medium of being able to speak about my life, and the world wants to hear it.”

Spontaneity and organic moments are especially inspiring for Aburmishan as a performer and as a host of The Comedy Bowl – tentatively set to return to Diversey Rock-N-Bowl this September – and The Riff – an improv-based open mic held on Mondays at Emerald City in Uptown.

“The way The Riff works is you go up when your name is called, pull a suggestion out of a bag and go off the cuff,” she said. “I love that you can’t come prepared. My theory is you can’t bomb at The Riff because it’s organic. Each set is whatever comes off the top of your head.”

The Riff – which was originated by Elizabeth Gomez – also nurtures an intimacy between everyone in attendance. “Comics end up sharing more with one another at The Riff than they would at another mic. When people are thinking of an idea. They go first to their own life experience. The comics really get connected to one another because the stories that they’re sharing are from their life,” explained Aburmishan.

Whether hosting or performing, Aburmishan lives for those magical moments when organic laughter wordlessly connects everyone within earshot. “My type of comedy – and what I’m evolving into – is a Don Rickles approach where you have some jokes but then you play with the audience,” she explained. “We [comedians] end up being conductors to the funny that’s already in the room. The audience really is the funny. The stuff that’s organic in the room is so much funnier and so much more intimate.”

As a performer on the 1001 Laughs Palestine Comedy Festival – which debuted in 2015 – Aburmishan joined festival founder Amer Zahr and more stand-ups on a comedy tour across Palestine to spread laughter and audience empowerment with each unique show. Along with performing in the evenings, the tour also prioritized connecting with kids during daytime workshops. “It really got the kids and local artists connected to the idea of American stand-up,” she explained.

The tour is currently seeking sponsors for its 2018 run (support 1001 Laughs here) and, in the meantime, Aburmishan will continue to make the world a better place, one laugh at a time. She said, “The amount of joy and healing that the 1001 Laughs Comedy Festival created – in that one week of being there – was absolutely palpable.” 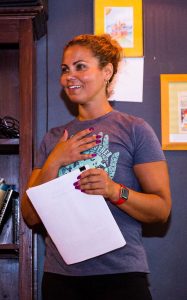 Instantly, a baby’s laugh will always make me laugh. There’s just something so innocent about it. Or when I remember something goofy that I did. That makes me laugh all the time.

I have a favorite joke that I do that gets a lot of people and it’s a good barometer. It’s an Arab pick-up line. I don’t want to give it away, but the idea of having a Palestinian hit on me with this cheesy pick-up line in this Arab way, it always hits.

The reason I call it a barometer is it reveals the level of engagement that a particular community will have in the bigger stratosphere of foreign affairs. Outside the United States it kills, inside, it hits more in pockets. That’s why I like telling that one.

The Comedy Bar. Tuesday they have a show called “The Tomato Show” where the audience is given these squishy tomatoes and they throw them at the comedians. It’s the scariest, most amazing show.

I have a video of me saying, “OK, I want all the tomatoes thrown at me.” And all the tomatoes in the room just come pummeling at me. It’s so much fun. And that’s just a Tuesday night show. So, all the other days are really, really good.

If I could take Trevor Noah, Don Rickles, Bill Burr and Eartha Kitt and put them in a blender, I would be that. Maybe add in some of the accents of Russel Peters because I have so many accents. That would be who Mona is. It’s very “purrrrrrrr” while saying something funny.

What makes me be rebellious is confident ignorance. That really gets me hot… What will send me is when a family member that I’ve known my whole life – they’ve held me when I was a baby – and as a grown woman he won’t shake my hand because he’s Muslim. It will enrage me and make me rebellious against that structure.

And I get it and I understand it. I’m pushing the envelope on the archetype of all my hyphens. I’m coming out with a book soon, and one of the aspects of the title is that I’m a very over-hyphenated person. From a former-fat girl to an Arab-American to a Muslim-American to a female-Arab, I have all these hyphens.

When one of my hyphens limits all the others, it’s hard to breathe. So what makes me rebellious is trying to break that. When someone thinks, “Oh she’s a woman so I can’t touch her” or “She’s Palestinian so I can’t talk to her,” that limits true human compassion and connection.

My best friend is Israeli. He lives in Colorado and – wherever I am in the world – I’m always on the phone with him, or via Skype, working out my set. It’s like we’re one in the same. Should I not love him because he’s Israeli? No.