Reena Calm has had a busy summer. Not only has she toured across the country, performed at some of the best shows in Chicago – you’ll often find her at the Laugh Factory – and returned to Second City as an instructor, but she also wrote her first book, Once A Pun A Time…: Legend Of A Sighs Queen.

“The book has been such a labor of love,” Calm said before an August performance with The Kates. “It’s silly because it’s all puns. I had a bunch of friends of mine contribute and do art to illustrate some of the puns. I love having something physical so all these puns can be somewhere other than Twitter and Facebook. And also it’s nice to have something to sell after a show. You can take a piece of me home and – since it’s a book – you can even bring it in the bathroom.”

Comedy – or “Calmedy” as she often describes on her website – is more than a career for Calm, it’s a way of life. While she currently resides in Chicago, the road will soon be her home as she is packing up a van and heading across the country to share laughter as she fulfills her dreams in 2019. “I don’t think comedy was a choice I ever made. I think it’s more of a calling, and the puns are more of a disease,” she said with a laugh.

Calm explained that while she will always love a good pun, since the 2016 election – which she refers to as “when the portal opened” – her material has taken a shift toward more significant subject matter. “I’m not a particularly political comedian, but I’ve started to have a lot of overwhelming gratitude for people listening,” she said. “Especially nowadays, when everybody is so quick to jump on an opinion and not be open to anything else. So the fact that you have a room full of people that want to listen is sacred to me. All I care about is making them laugh, but I have to do that with topics I care about.”

As a constant road warrior, Calm has the unique ability to genuinely connect with all kinds of people, and she especially enjoys the exchanges that she’s had with women in small towns.

“Where I come from is as an East Coast Jewish lady 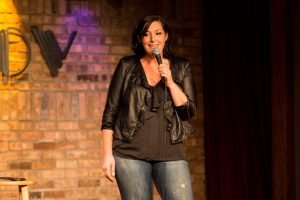 and I go to these rooms in the middle of everywhere,” Calm said. “Even just to be a woman talking in some of these places is rare and the response is so overwhelming that it’s like, ‘I have to do this.’ I’ve had women tell me that their boyfriends have told them not to laugh so loud because they were embarrassing them. I want to make everyone laugh, but connecting with women gives me a lot of motivation.”

Another one of Calm’s greatest motivators is sharing the power of stand-up with up-and-coming comedians. Along with teaching budding comics at Second City, she also hosts the weekly, Sunday night open mic, Three Dead Moose, at Will’s Northwoods Inn.

“Just give comedy a try and go to an open mic. I told my class today that I love to bomb. Nothing is better than bombing, especially in a place like Chicago where there is so much creative talent, but there isn’t a ton of industry. You can fail until you’re indestructible, and then you’re unstoppable,” Calm said.

Whether she is unveiling a multifaceted new pun, poking fun at her personal life or sharing hilarious material on reproductive rights, Calm’s positive energy is always in the spotlight. “I’ve struggled with depression my whole life, and I feel like I’ve been able to use that as a strength in comedy. I feel I’m in a very healthy head space with my own stuff and I even feel like I’ve been given this ability to make other people feel happier.”

“My whole idea behind ‘Calmedy’ is to promote happiness, not just laughter. There’s certain types of comedy that can uplift people. Whenever I’m on stage, I want to bring some light to the room as well as good energy and content for contentment.”

Classic stuff like a well-timed fart. Honestly, I’m an easy laugh, but it has to be genuine. I don’t like someone trying to be something they’re not.

Growing up I loved Gilda Radner so much, I was obsessed with her. Everything makes me laugh. Everything is kind of funny. Even the worst stuff can be so funny. So long as it’s real, it’s hilarious. Everyone I know has had a crazy life. The people who have had a “normal life” are the craziest, so I just enjoy hearing what somebody really thinks.

My favorite joke is always the last one I wrote, the newest baby.

My newest pun that I love involves a long story that has to do with Mark Twain and my puss, but I say that it’s a “clitorary reference.” So, I’m still slipping the puns in to my sets (Laughs).

Oh man, you gotta see The Bean (Laughs). I would say – and I don’t want my East Coast Jew to pop out but – Pequod’s has a very affordable lunch special. If you’re looking for deep dish pizza, just go get their lunch special. It’s like $6 and I think their pizza is the best. That’s what everybody asks about coming here.

Other than that, find a good 4 a.m. bar near wherever you’re staying. DM me and I’ll tell you where the best ones are in every neighborhood. Those bars are where the best – and the worst – conversations happen.

I feel like I don’t go out that much any more because I’m always at shows or in bed. My bed is great. I would highly recommend my bed, but I’m not booking any spots.

There’s so much good stuff right now it’s overwhelming. One of the people that I started watching in Chicago that just keeps getting funnier – it’s like, how does he do that? – is Marty DeRosa. He’s insanely good, and I wish everyone knew how funny he’s gotten.

He’s with Comedians You Should Know, and that’s my favorite show in the city. It’s every Wednesday, you can get tickets for $5 and it really has the feel of a New York comedy club. They have a really solid group of producers, and they sell out all the time. Doing that club makes me feel ready for anything.

Other than that, oh my gosh, all over the country I have favorites now. And sticking to Chicago I would also say the Laugh Factory because that’s my favorite club.

Everything. I’m scrappy as hell. I just changed [clothes] in this parking lot, for one. I think just doing comedy makes me pretty rebellious. It feels pretty natural to me, but I know that women, especially, are supposed to be seen and not heard and be polite. I’ve got a lot to say and I’ll take on any man on stage.