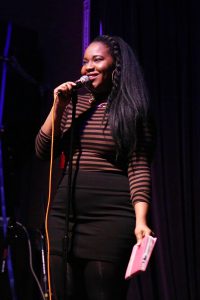 Rebecca O’Neal may just be the busiest person in Chicago. Along with hosting ongoing shows at Cole’s Bar and Laugh Factory, she also performs at least one stand-up set every single night of the week. On top of all this, she hosts WCIU’s new showcase “Chicago’s One Night Stand-Up,” which features the city’s top comics performing in front of a live studio audience.

Although O’Neal is comfortable performing just about anywhere in Chicago, she may be most at home at Cole’s Bar – the Logan Square hotspot that runs a free open mic every Wednesday beginning at 9:30 p.m. – where she performed for the very first time five years ago this February.

“When I started, you could go up so many times a night in Chicago as a brand new comedian who isn’t booking shows,” she said. “So as far as open mics, I started at Cole’s on a Wednesday night, and I hit four open mics on Belmont that following Monday night.”

Everyone from T.J. Miller to Cameron Esposito to Hannibal Buress – who is still known to pop in when he’s in town – have passed through Cole’s on their journey to comedy stardom. “I don’t know anywhere else in the country where you can get good this fast just by being able to get so much stage time as an unknown comedian,” said O’Neal. “And that’s exactly what me and my friends did. We made schedules. We had phone trees. We had carpools. We hit as many mics as we could to try to get good.”

Before she ever picked up a microphone, O’Neal was a self-proclaimed comedy nerd. She wasn’t allowed to watch BET’s “Comicview” growing-up, as she was raised an Evangelical Christian, but that didn’t stop her from sneaking in some TV time to study hilarious acts like Chicago’s own Deon Cole. Paul F. Tompkins and Maria Bamford (the latter, who O’Neal has since had the pleasure of opening for on numerous occasions) are two other key early influences who helped foster her love of stand-up.

O’Neal is getting ready to tape more episodes of “Chicago’s One Night Stand-Up” that will air in April. After that, she’s considering making a big move to one of the coasts. “I love L.A., but I have a lot of friends and a great support system in New York, so that is most likely where I’m going to go,” she said.

There you have it, Chicago. If you haven’t yet made it out to see O’Neal’s bold, personal, conversational style of stand-up, you’d better act fast. Check out a list of her upcoming Chicago-area shows here and follow her on Twitter to stay up-to-date with her latest news.


Rebellious: What makes you laugh?

O’Neal: Other comedians make me laugh in conversation harder than anything. My group of friends who are comedians, anything they do makes me crack up. Also, goofy things on the internet. I love a meme. Black Twitter cracks me up. If I was as funny as Black Twitter, I’d be famous already.

I have so many favorite jokes, it’s crazy. I wouldn’t even know where to start with that question. There’s a Maria Bamford joke I like, but it’s more of an impression where she’s making fun of this woman trying to order a very specific coffee in L.A. It gets so out of control, she’s asking the barista to airlift in sugar cubes and do all this idiosyncratic L.A. sh*t that’s just over the top health conscious. It builds so manically, it’s absolutely one of my favorite jokes.

L’ Patron Tacos. Go there, eat some food, walk around Logan and have a good time. Or Garfield Park Conservatory. It can be either sexy or cute, depending on what you’re going for.

I would recommend where we are right now, Cole’s Bar. The open mic is free. We give out free drinks, and you never know who’s going to stop in. Hannibal Buress is in here like once a month. Everybody gets so jazzed when he shows up.

Everything. I feel like my very existence is a rebellion. There’s a lot of sh*t going down right now, and it’s very interesting to try to make people laugh when you feel like things are all going completely wrong. I feel like being happy, performing every night, working all the time and being a black woman who’s not straight in our climate is the biggest rebellion I could possibly do right now – and that’s 100 percent how I feel.