Rather than following the traditional paths to comedy stardom, Sarah Sherman is forging her own way and finding the funny in the most unlikely – and at times mildly nauseating – of places. Her weird, wild and utterly hilarious variety show, “Helltrap Nightmare,” which combines elements of noise music, performance art, stand-up comedy and gross-out humor, packs Chicago’s The Hideout each and every month with fans who love the one-of-a-kind DIY show for its smart, silly, challenging, unique and incredibly funny performances.

“’Helltrap Nightmare‘ is like a traveling freak show of comedy, noise music, performance art and 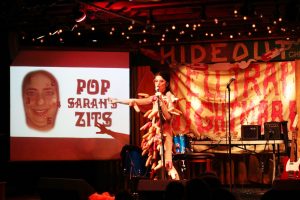 freaky behavior,” explained Sherman. “I was doing stand-up at traditional shows, and then I started doing comedy at a lot of DIY basement noise music shows. There was nothing that married the two. I was yearning for a freaky comedy space.” With nowhere to turn, Sherman created her own outlet where she is now only limited by her own imagination.

Each “Helltrap” performance is a completely unique experience. Video gore, inappropriate puppets, diverse voices, hilarious sketches from Sherman’s frequent collaborators, The Shrimp Boys, and “bizarre sh*t you can’t see anywhere else” remain consistent, but you never really know what you are going to get each month.

“Chicago is an amazing city with amazing stand-up shows, but most shows are the same. I think it’s good for people to go to something that challenges them and what they like while also exposing them to something different,” she said.

A great way to get a feel for “Helltrap Nightmare” before heading to a show is to check out Sherman’s intricate, surreal and gutsy artwork, which typically comes in the form of posters and patches. Her bright, colorful, cartoonish, delightfully disgusting designs find beauty in the most unexpected of places – just like the show itself.

“To me, the ‘Helltrap’ world is very visual and I encourage that. I like the idea that all of the visual art of my show creates a ‘Pee-wee’s Playhouse’ horror feel,” said Sherman. “My dream would be to actually have a ‘Helltrap’ Haunted Mansion.”

Along with being the mastermind behind “Helltrap Nightmare,” Sherman also co-hosts Cole’s extremely popular open mic with “Chicago’s One Night Stand-Up” star, Rebecca O’Neal. “I love hosting Coles, it’s great. Rebecca and I decided to set a precedent that it will be a supportive stage and a safe space for people to try out new ideas. It’s the best place to do it because it’s a great room and there is a bunch of people in the crowd, so you can find out really quickly if an idea works,” said Sherman.

With her unique vision, supportive outlook and unforgettable performances, it is no surprise that Sherman is often listed among the best comedians in Chicago, but – following a successful tour during which she “spread her seed around” – the rest of the country is beginning to fall in love with her as well. “There are freaks everywhere,” she said.

My dad. He’s the most perverted, vulgar person. He’s just a loud-mouthed Jew, and he’s the funniest person to me.

Do you have a favorite joke either that you do or you love from another comedian?
My friend Ruby McCollister – who also tours with “Helltrap” – she is the funniest. Her presence on the stage is great. She dances around and, along with my dad, she’s the funniest thing in the world to me.

What establishments or landmarks would you recommend for someone to visit in Chicago?
Hmm – I’m trying to think of where I took my friend when he was in town – Cole’s open mic.

Do you have any comedy recommendations to share with the world?
“Pee-Wee’s Playhouse” and Wham City, they’re a sketch group out of Baltimore. They make the craziest sh*t I’ve ever seen. It’s so good that it makes me want to pull my head off.