After graduating college, Sonal Aggarwal had no plans of returning to the Chicago area. She was loving life as a traveling performer and dancer with stints in Italy, Hawaii, Mexico and beyond.

While living in India and working as a fearless artist/emcee – under a name that translates to Razor B*tch – Aggarwal was involved in a motorcycle accident in 2015 that provoked her unexpected return to Chicago. During her recovery, she reconnected with loved ones, discovered a passion for comedy and transformed her moniker from Razor B*tch to Razor Bliss.

“I had to ditch the B*tch and embrace the Bliss,” Aggarwal explained prior to taking the stage at the biweekly showcase “RAD. A Fun Show” this past April. “Having deeply experienced both sides of myself, I realized it does not serve me to be angry, so I worked to cultivate ‘bliss rage.’ Your bliss can be a tool that you can use to pierce through the bullsh*t.”

In the back of her mind, Aggarwal always had an inkling that she would do stand-up, and her Chicago homecoming provided the perfect opportunity to start her comedy career. “After the accident, my whole identity was compromised, and I knew that I had to start doing stand-up comedy,” she said. “I was so scared to do it, especially in this country, because people are so defined by what they do or don’t do. They forget that there is a process. But, what I discovered is there’s a whole community in Chicago that supports the process, and you are allowed to suck at stand-up comedy because people believe that you will get better.”

Now, Aggarwal is one of the hardest working – and most hilarious – comics in the city, appearing in multiple shows often on the same night. “Congrats On Your Success” and “Hidden Comedy Show” are two of her regular gigs, and she can be seen on Netflix’s “Easy” as well as the new web-series “Code-Switched.”

She is also involved with “And Something 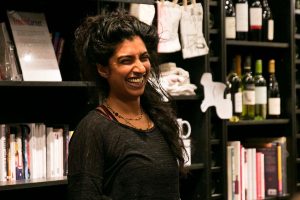 Else!,” a new Beauty Bar show – held on the fourth Monday of the month – which is inspired by Salonathon. “It’s a place where you can be sensitive, bold and daring,” said Aggarwal.

At her core, Aggarwal is a storyteller, and she has big plans in the year ahead as she is working on a yet-to-be titled one-woman show with director Jonald Reyes. “All my life, people have told me that I need to do a one-woman show because I have so many stories,” she said. “The show will be centered around my journey and how it led me back to be in a place of service, doing this work and giving voice to the voiceless.”

Aggarwal exudes positivity – framed by a realistic and informed worldview – on stage and off. She is an encouraging force in the creative community and would love to see more newcomers take the stage, any stage.

“That’s so powerful because we always want to do something to our best even before we’re ready to share it with the world,” she said of the beneficial effects of failing. “If you want to do it. Do it.” 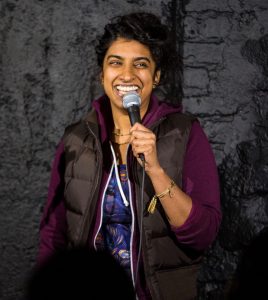 Oh, that’s so hard! Probably all sorts of inappropriate things that you’re not supposed to laugh at like my parents’ accents. And my accent in Hindi makes them laugh, too. My own anger makes me laugh. When I’m triggered, I think that’s a great opportunity to search for humor.

Dumbness of the human experience and the plight of humanity – and non-threatening rage-filled boys and spiritual people who take themselves way too seriously – I find hilarious. The experience of fear also makes me laugh a lot.

My favorite joke to do right now – because that totally depends on time and place – is “being a woman is so metal. Blood!!!” [said like a head-banging vampire]. It’s so silly. It’s just funny to me, the idea of death metal, blood and being a woman.

The easy go-to answer is any of the comedy clubs. I would say hop on Facebook and look up the Chicago comedy scene. There’s so many DIY shows happening, so if you go on Eventbrite and pop in “stand-up comedy in Chicago,” you’ll find stuff that is DIY.

Or use hashtags on Instagram. That’s the cool thing about social media is it’s linking the DIY world where you don’t have to go to a big club. And the DIY shows allow you to interact more with the comics because they’re going to be hanging out.

I’m a big, big fan of Steve Hughes. He’s from Australia and has some really smart humor. He’s kind of tricking you into digesting this really smart medicine with these really dumb premises.

Zainab Johnson. She is a lioness on stage. The formula of comedy is changing so much where it doesn’t have to be line, line joke or set-up/punchline. She’ll take her time and use powerful silences where you’re so captivated in what she’s saying.

And Tommy Tiernan, an old-school maniac from Ireland who has mastered the art of self-deprecation. I’m amazed that people don’t know him because he is one of my favorites. Tommy’s one of my go-tos. He’s so theatrical.

Borders and building walls bring out my rebellion. I’m such a bridge builder. People not having access to water makes me angry, rather than rebellious, but rebellion comes in when being told not to do something or being told you can’t get in somewhere.

Also, long lines make me really rebellious (Laughs). I’m like, “How am I going to be a rebel and get around this line!”