Sharing faith and a good laugh are two cornerstones of Tracy DeGraaf‘s comedy. She mines her own life and those of her husband Ron and their five boys – who she lovingly refers to as her muffin and mini-muffins – for hilarious examples of our “shared human experience.”

“Life Happens Laugh Anyway” – DeGraaf’s one-woman comedy show – packs churches and other venues across Chicagoland with individuals eager to enjoy a night of belly laughs inspired by the comedian’s joyful humor. With the presence of a motivational speaker and the uplifting message of a preacher, DeGraaf puts smiles on faces by sharing jokes about everything from treating her back pain with CBD back cream, to the best way to get out of a ticket, to convincing her husband to get a vasectomy.

Her everyday experiences resonate with fans who can be seen nodding along with punchline after punchline.

DeGraaf weaves two of her personal passions – her Christian faith and her quest to ensure women get mammograms – into her sets. She partners with churches or medical centers to host events fueled by laughter and purpose.

“The church comedy is one part of what I’m doing, but – because I’m a breast cancer survivor – I’m also performing at hospitals and breast centers,” DeGraaf said. “Instead of pointing them to Jesus at the end of that event, we sign them right up, right then, for a mammogram.”

The comedian credits a routine mammogram with helping her receive an early diagnosis in her own case. 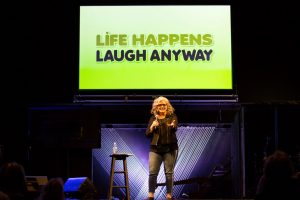 “Nobody plans to have breast cancer – or any kind of cancer – but I was diagnosed in 2015, just through a regular routine mammogram,” said DeGraaf. “I’m 53 now and I’ve gone every year since I was 40 because my mom died of bone cancer when she was only 51. That’s too young. I don’t want anyone to go through cancer if they don’t have to. The sooner you catch it, the better off you are.”

Topics like breast cancer, religion and family drama may seem heavy, but DeGraaf has the uncanny ability to cut straight to the humor of every situation and generate big, cathartic laughter. She also enjoys self-deprecating material, but she would never turn her sharp wit against an unsuspecting person.

DeGraaf never thought she would be a comedian, but after her youngest son entered kindergarten she began writing what would eventually become “Laugh Anyway Mom,” a collection of funny stories about her family. During the process of publishing the book, DeGraaf was encouraged to pursue comedy and, in 2008, she enrolled in The Second City and started hitting open mics.

“It took me 10 years to get to this point. It’s a lot, and it can be exhausting. When I started, I would go anywhere there was a stage, and some of it was an absolute disaster, but that’s how you do comedy,” said DeGraaf. “You take the stage, and you’re not sure if it’s going to work. When it doesn’t work, you burn it and work on something different. And it was actually fun.”

Armed with her faith, her supportive family and enough funny to fill a warehouse, DeGraaf now captivates crowds throughout every moment of her 90-minute shows, which she often concludes with a call to action. 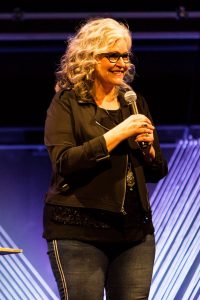 A dry, out-of-the-blue, crazy, wicked funny – but delivered deadpan – sense of humor. My husband is like that. He cracks me up, and our youngest son can just throw a line at you that is so deadpan and dry, it just makes you burst into laughter. That cracks me up.

My boobs on the gas pedal joke (laughs). I absolutely love that joke. It’s my absolute favorite joke because it kills every time. If anybody’s kind of been stoic throughout the show – there are people like that who aren’t outwardly moved to laugh – it will knock them over like a bowling pin.

The premise of the joke is that my girlfriend’s daughter-in-law said that I should unbutton my blouse when I get pulled over by the police. Well, the funny part about that is, I nursed for 11 years. I’ve been pregnant 205 weeks. I have to shop for my bras in the shoe department. And that’s when I do an act-out for the audience.

I’ve been on many field trips with these five boys and some of the field trips were better than others. We went on the architectural tour that leaves from Navy Pier and I loved it. It was a field trip that I could do again. It was really fun and you go on a boat out into the lake and they tell you all these fun stories about Chicago and architecture.

The other place that I love – another field trip with the boys – was Fair Oaks Farms. It’s just across the border in Indiana, and you can go there and watch cows be born. You also can watch them be milked and you can enjoy fresh ice cream and cheese. They have a little cafe there and a wonderful farm-to-table restaurant. Everything is fresh and local and delicious.

There’s a show I’ve been watching on TV that cracks me up. It’s called “The Kids are Alright.” It’s about an Irish Catholic family in the ’50s or something, so they have 10 or 11 boys. Of course, it resonates with me because it’s chaos and it’s so funny. The mom on there is so angry all the time. She cracks me up.

Of course, I like to support live comedy as well. Rocky LaPorte is a local comedian who went to the finals of “Last Comic Standing,” so I try to go to his events when I can. And my friend Michael Isaac has a special coming up in May. I like to support local comics because I know how hard it is to do (laughs).

I would say I probably gather a lot of strength because I did lose my mom when she was so young. I’m now past her age. She didn’t get to live as long as I have now. And having faced cancer myself and beat that, I think, “What have I got to lose? Why should I let anybody tell me what to do or define me?”

That’s one of the reasons I let my hair grow silver. I don’t care, and that was a journey, let me tell you (laughs).

I think life is precious. Life is short, so why not rebel? Go against the norms, so to speak, and just live. I mean stay within the law, but live.