The walls at Creepy Company are green—not a pleasant, soft, verdant green. They are violently green. Aggressively green. The color of ectoplasm and exorcisms.

I feel the need to comment on the overwhelming green-ness of this green almost as soon as I arrive. Sitting in these headquarters feels like slowing decomposing on a lush, freshly-mown field.

“My favorite color is orange,” Kellie Taylor, creative director and founder of Creepy Company, tells me. “I don’t meet a lot of orange-loving people, and when I do it’s kind of a special thing.” Her love of orange in no way explains why the walls are this green. It takes me a half an hour into the interview before I realize that the combination of orange and green is typically associated with Halloween. 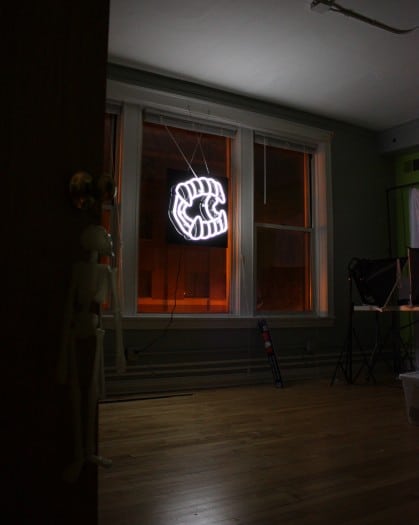 This is by no means the only indicator that Creepy Company is appropriately creepy—the company is the brainchild of Taylor, who founded the enterprise in 2015 with her wife and Business Manager Susanne Goethals. Their headquarters, located off of the Wilson stop in Uptown, have gargoyles staring down at passersby from the roof, the offices inside are decorated in vintage horror posters, and a business logo of glowing, neon vampire teeth hangs from the window. A small dog runs freely throughout the office. They tell me her name is Wilhelmina. The only Wilhelminas I am able to find in literature include the character Wilhelmina Slater from “Ugly Betty” (portrayed by Vanessa Williams) and Queen Wilhelmina, one of the longest-serving Dutch monarchs who reigned during both World Wars and was a major figurehead of the Dutch resistance. Both seem appropriate to describe Wilhelmina the Dog.

It seems fitting that this Chicago-based, Chicago-founded startup would celebrate the unique and macabre in its decor and presentation. Creepiness is so intrinsically linked with the business that the definition is listed on its website. “Creepy: adjective, informal. 1) Producing a nervous shivery apprehension…2) Of, relating to, or being a creep: annoyingly unpleasant.” This link to creepiness was intentional, Taylor told me.

“I read a book that was a philosophical treatise on creepiness,” Taylor said, referring to Adam Kotsko’s non-fiction work, “Creepiness.”

“He talked about pop culture and things that were creepy—whether it be overtly horrifying decor or [a] creepy neighbor like Steve Urkel. The whole idea of it was that even if people protest against creepiness, they are secretly infatuated by it. Creepiness is part of our culture…there is something about creepiness that is universal.”

As Kotsko details in his book, this universal appeal to creepiness is frequently explored in pop culture, allowing the audience to identify with the other in a way they might not be able to in real life. Creepy Company has managed to hit a nerve with a massive audience—at present they boast more than 82,600 followers on Instagram and provide a catalogue of goods that feature the whimsical, bizarre and downright spooky.

After graduating from the School of the Art Institute of Chicago, Taylor worked a series of odd jobs and internships before she experienced a moment of divinity, in the form of a Divine pin. The pin recreated Divine’s character from “Pink Flamingos,” the sensational and sensationalistic Babs Johnson, and sold out immediately. “The next pin I made was our logo,” Taylor tells me—a pair of plastic vampire teeth similar to those found in Halloween costume shops that are still featured on the site. “People loved that—it hit a nerve.” 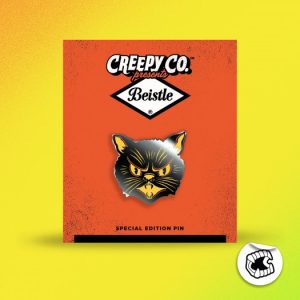 In the beginning, Taylor and Goethals relied on Instagram to showcase their pins, but their popularity has allowed them to branch out into a website and a wider collection of goods, including collections with licensed brands like Goosebumps and Beistle—the company that has been providing Americans with novelty holiday decorations since 1921. And this fall, Creepy Company gear and collectibles will be sold in Hot Topic, Box Lunch, and Barnes and Nobles across the country, allowing an even bigger audience to get in touch with their creepy side.

The speed with which Creepy Company has grown in only a few years has led Taylor and Goethals to make major career changes. Goethals, a former philosophy professor at Western Governors University and City Colleges of Chicago, quit her job in July of 2016 to focus full-time on the business with Taylor. “As soon as [Taylor] started designing pins, we had a business,” Goethals said. “We started doing well enough that we realized it really made more sense for me to quit my job—it was a big career change, but I was really surprised at how much fun I was having…It’s a kind of adventure to move in a world I knew nothing about.”

Taylor and Goethals tell me they work a vampire schedule—working in sync with their Taipei manufacturers and sometimes not leaving their overwhelmingly-green office until the sun comes up. This drive and vampire schedule has allowed them to provide new products outside of the pins that first launched the business. 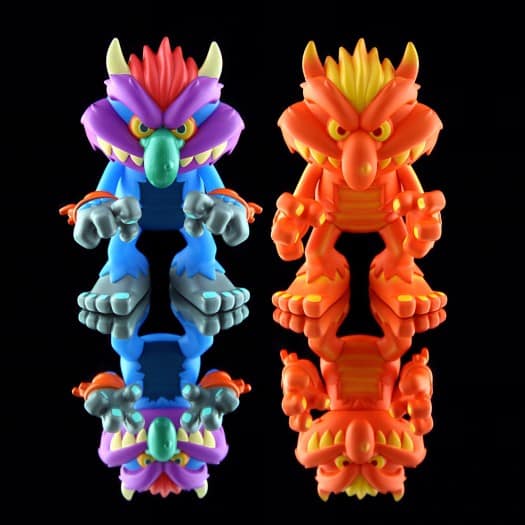 “Some people call us a pin brand, but we got ‘pinned down’” said Taylor, with a very terrible and also very accurate pun. Creepy Company is constantly expanding—evolving to provide new products that cater to the creepy lifestyle. On their website, sections are dedicated to their catalogue of pins, collections with Beistle, My Pet Monster and Vincent Price (amongst others), apparel. They even have a new section titled “Ars Moriendi,” featuring pins and stickers of coffins, poison vials, and candles showcasing the death mask of the Unknown Woman of the Seine, an unidentified woman whose body was pulled out of the Seine River in Paris in the late 19th century and whose death mask became a well-known image in Bohemian society.

Creepy Company is refreshing to visit—it’s a Chicago business run by women (and Wilhelmina the Dog, of course) that provides pins for strange and supernatural patrons. Taylor corrects me when I refer to Creepy Company as a pin company.