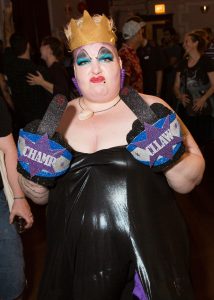 The 26th CLLAW match, Battle of the CLLAWentines, is Saturday, Feb. 11 at the Logan Square Auditorium, with proceeds benefitting Sideshow Theatre and the Chicago Women’s Health Center, both local non-profits.

What started in 2008 as a fundraiser in Charlottesville, Va., has grown into an international movement of lady arm wrestling organizations, with Chicago as one of the biggest participants in the country. Chicago’s group also started in 2009.

If you’re wondering what to expect at a CLLAW match, Rosenthal says not to worry.

“The second you walk through those doors you’re like, ‘Oh, I see what this is.’”

“What’s so awesome is that both types flourish at this event and can go all of the way,” Weddell says.

Cursula: The Sea Bitch (pictured above) is the reigning champion, and while the characters aren’t real, the athleticism is. Sometimes. Personality also goes a long way.

“When I was wrestling, I got by for years just on charisma, like no real body strength,” Rosenthal says. “You use your core muscles more than you think you would.”

Wrestlers have their own chants to rile up the crowd, their own theme music, manager and – wait for it – “arm-tourage.”

Those roles are great ways for male-identified folks to get involved with CLLAW, along with the two play-by-play commentators and, of course, the drag queen who sings the national anthem.

Audience members are encouraged to cheer on – and wager on – their favorite characters using “CLLAWBUX” placed in each wrestler’s bucket. The BUX function as raffle tickets of sorts, and after each match, CLLAWBUX are drawn from the winner’s bucket for a prize (say, a night in a hotel or a gift certificate for a local restaurant) and from the loser’s bucket (“something you would get at the dollar store,” Weddell says).

Money raised from the CLLAWBUX also goes to the non-profits. CLLAWBUX are cheaper online in advance, so it pays to buy early.

Any other advice for the audience?

“Come ready to cheer on some wrestling,” Weddell says.

Buy early: Lines are long, and you can get deals on CLLAWBUX online.
Be prompt: Doors open at 9 p.m.; the first match is at 9:30 p.m.
Bring cash: For the bar.
Say hey: Rebellious Magazine for Women is a proud media sponsor of CLLAW, so be sure to swing by our table.

If you want to join the CLLAW community, Facebook is a good way to reach them to:

Volunteer: To take tickets at the door, sell CLLAW bucks or work the merch table, among other duties.
Rock On: A different band plays every intermission.
Pitch a Wrestling Character: Stay in touch by signing up for CLLAW emails and liking the Facebook page, where they list details about upcoming wrestler registration.