Zipporah Jarmon started selling boxer briefs for periods because no one else was. As someone who prefers wearing boxers, her complaint is that they’re not typically designed to work well with period products. So she came up with a design for her company Pyramid Seven: boxer briefs with an inner pocket that can hold menstruation products, such as pads. And her immediate thought was that other people like her — masculine-presenting women — would be interested in the product as well.

From the start, Pyramid Seven’s tagline was to make boxer briefs for periods, regardless of gender. But Zipporah envisioned her product most appealing to people like her — on the masculine end of the spectrum.

“The company started off as: we’re making boxer briefs for masculine-presenting people. But then, when we started looking for models, we started noticing that some people identify as masculine, and they didn’t match my definition,” Zipporah explained in a phone interview. “So then I had to ask myself, how can I or my company say who is masculine enough?”

Then Zipporah started asking, why should this product only be for people who identify as masculine at all?  For instance, Zipporah’s romantic partner presents as feminine, but wears boxer briefs at night or when she’s on her period. She asked Zipporah why the product wasn’t targeting people like her, as well. 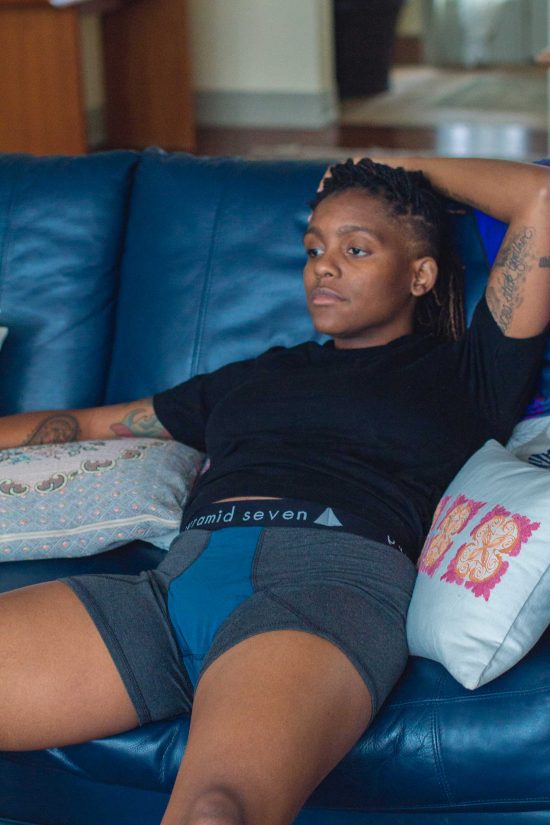 But their inclusive approach didn’t stop there.

Zipporah learned that people might use their boxer briefs for reasons other than periods, such as:

“You have to be open enough to say, ‘This is what inclusivism looks like right now in my mind, but I know that that can change.’”

While Zipporah hopes that her company sets a standard for being inclusive, she knows that it will backfire if other companies feel pressured.

“I shouldn’t have to tell you to respect queer people or black people or whatever and tell you to put that into your marketing and your branding, because it’s all about what your intentions are.”

When companies target an audience because they feel pressured to do so, it shows, she explained. The efforts come across as less authentic and people still feel like an afterthought. I asked Zipporah if she believes her company is promoting feminist values, and she responded that the term requires a caveat.

The company continues to investigate who they might be leaving out, who might benefit from their product and who is being ignored by traditional marketing.

“Inclusive means everybody, even the people I’m not thinking of today — those people need to be included in this future somehow … knowing there’s this need that you can’t think of yet.”

But how do you market to everyone?

When choosing models, they do their best to represent as many groups as possible, especially representing a spectrum of genders. Even then, Zipporah is frustrated that they get boxed in as a queer company.

“Inclusive means everybody, even the people I’m not thinking of today …”

“Society teaches us that we have to put people in boxes, so even with us saying we make boxer briefs for periods, not gender, people automatically say, ‘Well you have people who are transgender on your site, so let’s talk about that.’”

Zipporah was quick to note, however, that the trans community has been historically left out of conversations and not marketed to. Pyramid Seven strives to include them without being exclusive to them.

The other consideration of including everyone is that you also include people who are disadvantaged. Zipporah doesn’t see this as an issue of creating an inclusive company, but as a personal issue for a business owner. 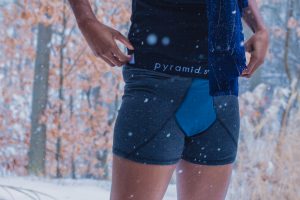 When they started making their products, they were handmade and hand-dyed. As demand increased, so did their cost to make the product. Their boxer briefs are entirely produced in Chicago using premium-quality materials.

Zipporah added, “As we grow, we want to give more pricing options with our other products to truly give people a choice to buy a pair no matter their financial circumstance.”

Pyramid Seven is also committed to giving back. They donate products to people who are under 18 through organizations like the Broadway Youth Center, which houses at-risk LGBTQ youth. They also plan to donate a percentage of their sales to similar organizations.

Zipporah has said that the company’s name is a combination of two concepts: that the uterus is triangular, and when it’s made 3D, it becomes a pyramid. And, in astrology, the number seven represents the completion of a cycle. The company is now pre-selling their next product, which is made of a new fabric Zipporah explained is “cool to the touch, really stretchy and absorbent.” They’ve also added leak-resistant material to the inside pocket and the front and back of the briefs.

Their future goal is to offer multiple styles at the same time, such as another product that is completely absorbent for people who don’t use tampons or pads. Ultimately, they just want  people to feel like they have an option that works for them.