Hey there, confeshhers. Here’s a ConfeSHH! about an inexplicable attraction that I thought was fate. But ya gotta trust your senses…

On the night of my 30th birthday, the stars aligned to allow me to meet the love of my life. The only person in the universe I was fated to be compatible with. You don’t fuck with the universe. You can’t argue with the stars.

And I was also really drunk. He was 6’3″ and lanky with clown-like curly hair. HE WAS ALSO A CAPRICORN JUST LIKE ME.

And he just so happened to be friends with my current boyfriend’s best friend, which made things convenient…or inconvenient.

When we all drove back to my house from the karaoke bar, I exchanged phone numbers with this fella, “Phillippe,” just in case he “got lost.”

TRANSLATION: With this magical number, you can always find your way back to your true love, which is, by the way, me.

Over the next few years, Phillippe showed up at a lot of our parties, and each time my heartloins quivered with the truest of truths. The knowledge that I was inexplicably sexually drawn to him was solid proof that we were to be man and wife, by my standards.

One New Year’s eve, after my ex and I had broken up but still continued to live in the same apartment because that’s always a great idea, I cornered Phillippe between my microwave and refrigerator, stood on my tiptoes to reach his mouth and waited for history to make itself.

God, I had game. I understood nuance.

“Aren’t you and Shawn together?”

“Well, I have a girlfriend.”

A motherfucking girlfriend who I now obviously had to KILL to preserve the Lisa and Phillippe bloodline.

HOW COULD I HAVE BEEN WRONG THIS WHOLE TIME?

A couple years passed, and despite all the men I fell in love with for 15 minutes each night after my shift at the neighborhood bar, I still yearned for Phillippe with an animal hunger I could not justify.

One night, the bar I worked at was empty. I heard the door open.

I looked up and PHILLIPPE WAS STANDING THERE.

HE HAD COME FOR ME. 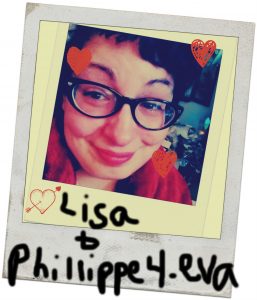 My realtime reaction right then.

I bought him a drink and told him he owed me one.

He said he would pay up after my shift.

GOD DAMN RIGHT HE WOULD.

We went to a four a.m. bar and I asked, “So, why after all these years, did you come to the bar? You had to have known I was working.”

“Because I knew you liked me.”

TRANSLATION: FATE. IT IS FATE. IS THERE A 4 a.m. COURTHOUSE OPEN RIGHT NOW TO MARRY US?

We paid our tab and went to my house to fulfill what had already long been written in the annals of time.

As he got settled in on my bed, I ran to my bathroom, removed my shoes, and sprayed a fuckton of Victoria’s Secret Bombshell perfume on my feet, armpits, vagina, butthole, head and lips.

When I he asked, “Did you put on perfume?”

TRANSLATION: I was right all along. We were meant, as animals, to mate for life. Thank you, pheromones.

We quickly dispensed with foreplay and began making fate love.

Man, I fucking love that.

Many a man has done this to me before, and I really dig it. I am no stranger to kink, to group sex, to fetish. There’s nothing that can shock me. I am GOOD. I am GIVING. I am GAME.

And then, Phillippe took his green-eyed curly-topped head and BURIED IT ENTIRELY into my sweaty ARMPIT. He kept sniffing like a dog hunting for a treat that has accidentally been kicked under the refrigerator. He kept getting more and more into it until he was snorting like a warthog.

WHAT THE LIVING FUCK?

I did it back.

After we effed. We effed again.

A few months later, Phillippe invited me to a corn maze excursion, so I made sure to dress in my best heavy sweater.

Not because it was cold.

Because it was unnaturally warm for October.

AND MY TIME HAD FINALLY COME.

I hadn’t been wearing deodorant for months in anticipation of this day.

After the corn maze hike, I smelled like a fried onion that had been scooped on top of a steaming plate of huevos rancheros.

My acrid pheromones were effective.

My destined one and I joined bodies again that night.

He lifted me off the bed with his pelvis and kept fucking me like we were levitating with the power of love.

We laughed. He cried.

But we don’t get to pick the people the universe chooses for us.

I know this because I never fucked Phillippe again.

I had a friend that lived in his neighborhood and every time I “coincidentally happened to” walk by his apartment or drive past it, I fanned out my armpits in the hopes that he would emerge like a hungry beast possessed by my love aroma.

I left a very sweaty tank top at his apartment. It’s been a few years and I’m sure he still sleeps with it under his pillow and buries his face in it wistfully. Yearning for what could have been.