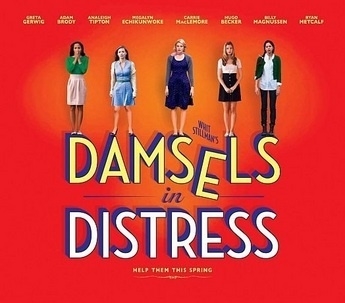 “Damsels in Distress” takes place in a world that doesn’t much resemble this one. Its college-age characters wear old-fashioned clothes and talk in oddly formal ways, but seem to live in a modern world. A modern world without cellphones. These are not real people, but neither is any Jason Statham character, ever, so that’s not necessarily an obstacle.

The film begins with Violet (Greta Gerwig) and two henchladies taking new student Lily (Analeigh Tipton) under their collective wing. Lily is a transfer student who’s left her prior college for unknown reasons. Violet has a lot of advice about how to make it at Seven Oaks College. Most of it involves dating idiots from the school’s Greek, or rather, Roman, system, because it’s easier to improve them. They also spend a lot of time volunteering at the suicide prevention center, which seems to involve making sure students are actually depressed and not just coming in for the free donuts.

Violet is one of those movie creations that only exists on film, and Lily serves as the audience stand-in for most of the film. She quickly sees that Violet is slightly off her rocker and starts treating her as such. But then Violet’s doofus boyfriend dumps her and she goes into a tailspin (her choice of words) and flat out admits she’s pretty crazy.

The movie’s greatest accomplishment may be that director Whit Stillman takes you from siding with Lily against Violet’s nuttiness to thinking Lily is being a little too hard on her. Violet does not stop being nutty, but her willingness to own up to some of her weirdness gives her the necessary humanity to earn your sympathies. Why shouldn’t she be entitled to live life with a totally bizarre philosophy?

This is not a movie for everyone. There are false identities, quirky personal backgrounds, a character so dumb he can’t identify colors, and an attempt to start an international dance craze. If you can get past these various handicaps, you’ll find a movie interested in exploring the ways young people create and change identities for themselves at college.

College somehow persists in being a slightly difficult topic to handle in movies. High school movies flourish, but college movies tend to focus on the party aspect of college and nothing else. It’s not like parties aren’t a big part of college, but a lot of people are figuring out who they are at that age and what kind of behavior they’re willing to put up with from other people. Granted, in my memory, people wore a lot more sweatpants and fewer cute dresses, but they did sort of stretch out their identities in new ways.

This is like the amuse-bouche of movies. You can admire the artistry of it and its wry sense of humor, but it’s not something you rave about to your friends later. You’re not quite sure if it succeeded or failed as a dish because there wasn’t really enough of it to make a decision one way or the other. It’s not bad, but is it really that good? On the basis of at least making a valiant effort to understand what it’s like to be a young woman without passing judgment on the choices women make, I can’t dislike it too much.