The holidays are a time when most Americans seek happiness and hope. You know, that magical feeling where anything is possible and everything will be OK. But until the Mueller Report is released next year, such auspicious sentiments can be experienced through fairy tale and Christmas classics.

Take “Disney’s Beauty and the Beast” at Drury Lane Theatre and the Joffrey Ballet’s “The Nutcracker” at the Auditorium Theatre. Apart from the kidnapping aspect of the former and a problematic start to the latter (a grown man visits a sleeping tween, which spurs her hallucinogenic dream), both stories reward courageous heroines in a positive way as each goes where no man (make, that girl) has gone before.

For Belle (Erica Stephan), it’s to a bewitched castle populated by personified objects: Cogsworth the clock, a candelabra called Lumiere, and Mrs. Potts, a warm and finely-dressed teapot well played by Bri Sudia. There’s also a beastly prince (Brandon Contreras) who learns the value of compromise, compassion, and inner beauty.

Based on Disney’s 1991 animated feature (which was based on an 18th century French tale), director Alan Souza’s current stage version of “Beauty and the Beast” is a rehash of the 1994 musical with book by Linda Woolverton. This is not to be confused with the 2017 live action feature of the same name, co-produced by Walt Disney Pictures and Mandeville Films.

That’s a lot of credits to keep track of. The important ones to note are lyricists Howard Ashman and Tim Rice who, with composer Alan Menken, created a beloved playlist. Despite the missteps of the current production (which dumbs down the story and amps up the volume), the catchy songs remain the same. And therein lies the magic of the Disney brand. 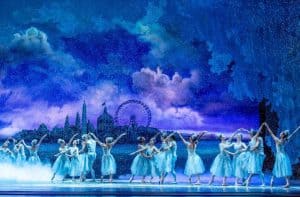 Instead of repackaging a familiar brand of “The Nutcracker,” the Joffrey Ballet has created its own customized classic unlike anything audiences have seen before thanks to author/illustrator Brian (“Wonderstruck”) Selznick and Tony Award-winning choreographer Christopher Wheeldon.

Totally tied to the Windy City, the 2016 reimagined work takes place in 1892, months before Chicago’s 1893 World’s Fair. This new setting is nothing short of brilliant as it presents a single mother/sculptress (Jeraldine Mendoza) preparing for the fair with her immigrant friends—plus one Great Impresario (Dylan Gutierrez) who gives her daughter (Anais Bueno) a nutcracker.

That gift and a pack of rats become catalysts for a fantastical dream that includes marvelous music, dance and costumes from the foreign lands (Arabia, China, Italy, and Spain) participating in the upcoming fair.