A quarter till 2 p.m. on Saturday, two long lines (one VIP and one general admission) curved around and filled the large entryway in one of the huge exhibition halls at the Donald E. Stephens Convention Center in Rosemont. We were all waiting to enter the world of Exxxotica, a touring adult expo with stops in Chicago, Portland, Miami, and Edison, New Jersey.

(Full disclosure: The only reason I knew about the event was because I started offering many of these services last year under a different name. And many of my colleagues were making appearances.)

But in line, I was actually sandwiched between two 20-something couples. A dozen or more couples (all heterosexual from what I could tell), ranging from their 20s to retirement age, were interspersed throughout both lines, frequently holding hands. The number of couples was my first (and biggest) surprise at the expo. 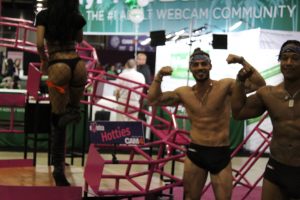 At 2 p.m., the expo officially opened, and the line moved quickly. Attendees were greeted at the entrance by the first of many “hotties,” paid models who smiled and posed for the cameras.

If you’ve ever been to a “Taste of” event—like Taste of Chicago—keep that energy in mind. They’re loud and crowded and instead of the full immersive experience of a restaurant or a concert, you get small samplings, moving from booth to booth, stage to stage. That’s what the expo felt like to me.

Besides the booths, there was live entertainment like burlesque and kink performances, pole dancing and Ms. Exxxotica competitions. Tables full of cam models from Chaturbate and MyFreeCams.com were streaming live, facing each other from across the walkway as if participating in a “cam-off.”

Then, there were the more experiential components. Attendees could try out being flogged or tied up in a makeshift dungeon or attend one of the many workshops, from how to make it in the adult industry to the basics of butt sex. 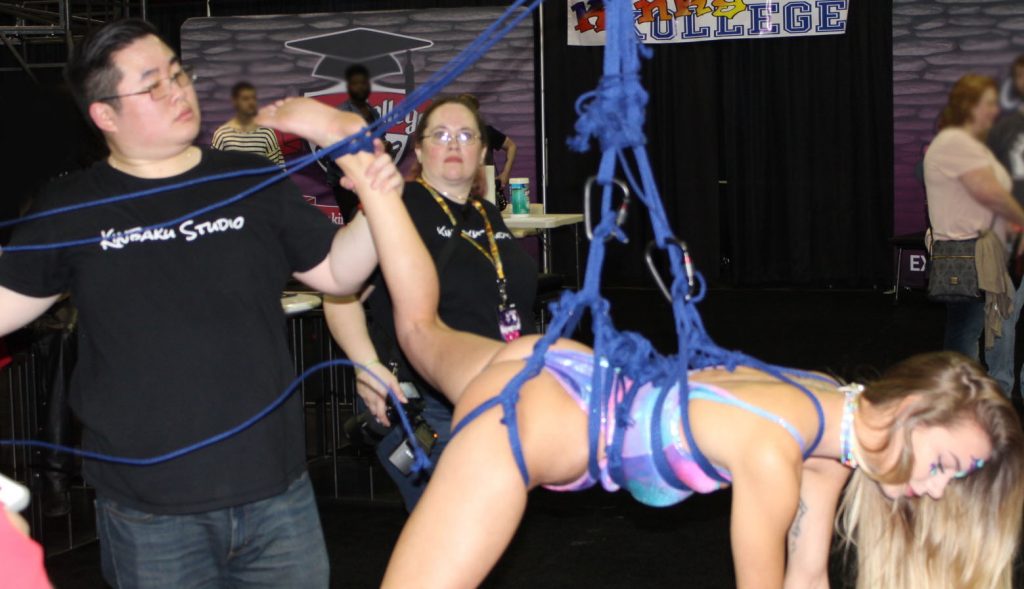 When I mentioned the “Taste of” comparison to Mistress Kye, one of the three Professional Dominatrixes who host the expo’s dungeon, she explained that they actually refer to what they do as “tastings.”

For instance when someone wants to try out impact play (where you are hit with an object like a paddle or a flogger), Mistress Kye or one of the other Dommes will start out very light, such as using a flogger in a way (which I know from experience) feels like a leather caress. They work their way to heavier play, a harder flogging and possibly a whip, depending on the person’s interests and limits.

For those who are too intimidated to try it on their own or check out something like a members’ only dungeon, the expo provides an opportunity in a more neutral environment: a convention center.

“I love being able to tell people that what they’re feeling is normal. Something psychologically is drawing them here,” Mistress Kye said.

I heard much of the same from other educators at the expo. It might be a couple’s first opportunity to be in a sex-positive space where it’s okay to talk about one’s vulva.

It presents an opportunity for people interested in learning more about the business side of things, as well.

“It’s much harder for bigger girls to get into the industry,” she explained. They’re less likely to seek out advice from a model that fits the more traditional beauty standard. But there’s plenty of business to be found for the entrepreneurial person of any size.

Another myth she dispels: “Not everything is about fucking on film.” The industry is big enough to support a wide range of fetishes and sexual expressions. “I can do me,” KaBoom said. “Nobody can tell me how I should do me.”

The labels Presley uses to promote herself don’t define her or her career, and the same is true of the other performers that use them. “A lot of us are just ourselves,” she explained. And her fans? “They just like my confidence.”

The expo creates access to communities and individuals that can seem inaccessible. In one space, you can try out that thing you’ve only read about or seen late night on Showtime; you can become a g-spot expert; and you can meet the actress you’ve crushed on for years. To me, the beauty of the industry and the event is that they make space for all kinds of people and interests, but this is also where both the industry and the expo still have work to do.

While inclusive, the industry and the expo tend to highlight the conventional. The expo’s “hotties,” positioned throughout the space to provide atmosphere, all had very similar looks: all the men were ripped and all the women were petite. And while I wasn’t at the event the entire time for all three days, not once did I see a plus-size individual featured on the main stage.