Your heart may belong to Daddy, but your strongest bond belongs to Mom. According to The Journal of Neuroscience, the mother and daughter relationship is the closest union any two people can experience, for better or for worse. So, it’s no wonder this familial force fuels two films released this month.

Israeli actress Alena Yiv shines as “Asia” (2020) per filmmaker Ruthy Pribar’s feature-length directorial debut. She plays a 35-year-old nurse who is a single mother to 17-year-old Vika, portrayed by award-winner Shira Haas, who American audiences may recognize from the Netflix miniseries “Unorthodox” (2020).

As the drama begins, the two act more like estranged roommates than family members. But their lifestyle changes when Vika’s health starts to deteriorate due to an unspecified affliction that weakens her body and lungs. Out of necessity, Asia and Vika spend more time with one another. Then, out of love and a longing to connect, they genuinely enjoy each other’s company despite the somber situation.

The semi-antagonistic phase that many moms and teen daughters go through quickly morphs into the deeper connection that parents and their grown offspring realize with maturity. But since time is not on Vika’s side, the process of this revelation is accelerated. However, the film never seems rushed. It slowly unfolds in an intimate way with nuanced performances. Thanks to the subtle script by Pribar, the process of letting each other in and letting each other go is movingly told.

After viewing this tearjerker, audiences may need a feel-good film such as the latest rendition of “Cinderella” (2021). This time around, WGA Award-winner and Illinois native Kay Cannon of “Pitch Perfect,” “30 Rock,” “New Girl,” and “Girlboss” directs the script she adapted. As such, the fairy tale adopts its most feminist approach. 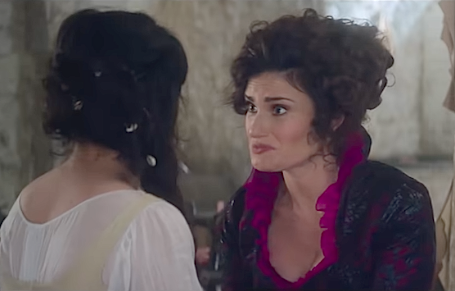 That is, the main character (played with aplomb by Camila Cabello) has ambitions to become a successful seamstress. Indeed, it is her sketch of a dress that Fab G (Billy Porter) uses to create her enchanted gown for the ball. More magical caterpillar-turned-butterfly-turned-human than traditional fairy godmother, Porter’s character materializes through a kind of karma sparked from the heroine’s kindness.

Although Cinderella fancies the prince (Nicholas Galitzine), her main motive for attending the ball is not to win him; it’s to find wealthy clientele for her cottage industry. This reasoning differs from the views of her stepmother (Idina Menzel) who was taught women gain security through marriage, not by pursuing their own creative dreams. And this is why she’s been particularly stern with her stepdaughter. In other words, movie-goers are finally presented with a stepmother who is not a two-dimensional villain.

Meanwhile at the palace, the prince’s mum (Minnie Driver) and her daughter (Tallulah Greive) are struggling to be heard within a patriarchal monarchy that does not acknowledge their contributions. Like Cinderella (who wears heavy eye makeup despite her supposed good taste and independent ways), they must stand up for themselves to ensure a happily ever after.

Along the way, audiences are treated to a mix of new songs (including “Million to One” co-written and performed by Cabello) and existing hits initially covered by Janet Jackson, Madonna, Queen, The White Stripes, Salt-N-Pepa, and others. Similar to “A Knight’s Tale” (2001), the movie playfully plops music of the 20th and 21st centuries into a time of yore tale.

The enjoyable soundtrack, capable cast, amusing one-liners, and new spin on an old story make this film entertaining. Some may say it’s too woke or not woke enough, but it strikes a happy medium for a happy viewing experience.

Both “Cinderella” and “Asia” are recommended. “Cinderella” is currently playing in cinemas. It can also be streamed on Amazon Prime Video. “Asia” opens virtually on Sep. 24 via Music Box Theatre and Menemsha Films. Click here for information on rentals.