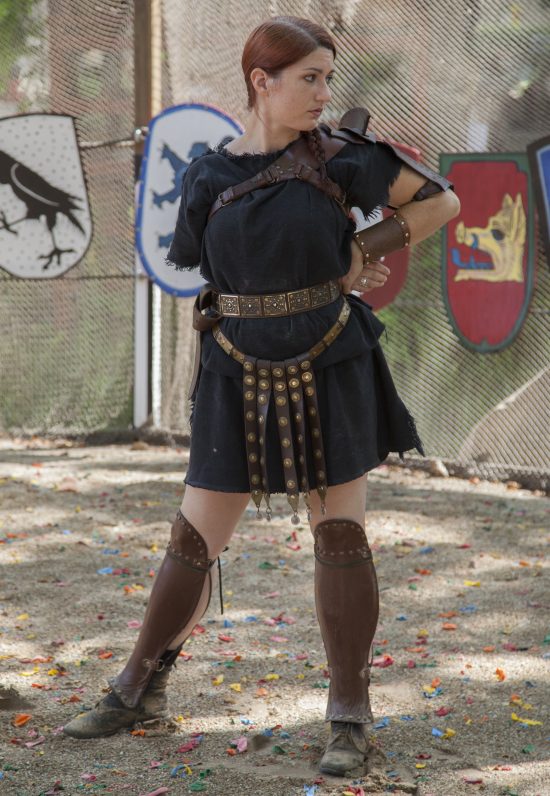 Kaitlin takes a wide stance. With her leather boots firmly planted into the ground, she tilts her body to one side, reaching her arm over her head. She’s just stretching, but the focused look on her face is that of an athlete. Serious. Determined. Kaitlin isn’t getting ready to compete, however. She’s preparing for a day full of patrons that she’ll train and referee during a trial fencing match. One of the perks of visiting the Bristol Renaissance Faire.

This is what Kaitlin did five years ago when she came to Bristol as a customer and fenced for the first time. She started martial arts training in the fourth grade, and the new sport seemed to come naturally to her. She was good, and she was hooked. She came back the following year as an employee where she learned to fence in one of their training programs, and she’s worked there every summer since.

The staff love powerful women, Kaitlin said, and fellow Bristol Renaissance Faire performers Kat Brown and Heather Last agreed. Brown plays a flipper, a person who sells secondhand clothes, while Last plays the sister of the village’s mayor, who is throwing the festival.

“This place is full of powerful women giving other powerful women chances, and the men here back that up,” Brown said. “It’s not a place where we hear, ‘Well, you’re a girl, so you don’t know this.’” 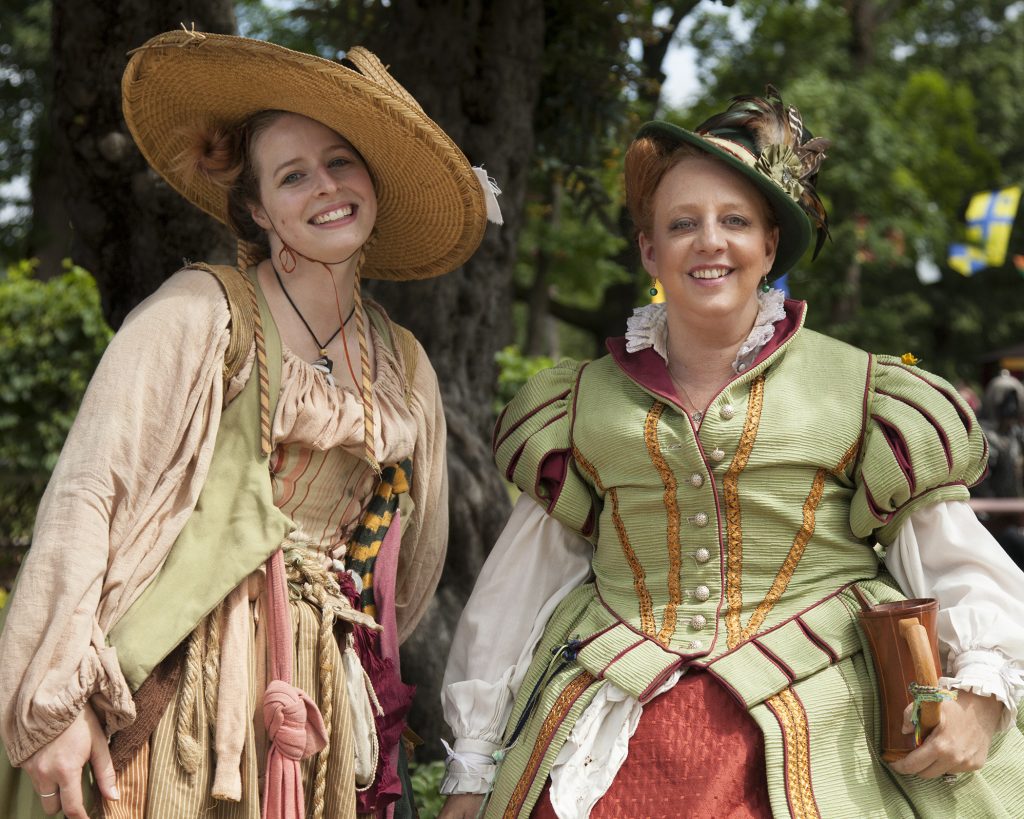 Since much of the management team are women, it makes sense. Bristol awards “ability and passion,” Last explained. From the owners down, the mentality is: If you do good work, you can try anything. You can work your way up to any position, even owner. That’s what Linda McFeters and E. Buffie Stone did, who bought hefty shares of the company after years in management positions.

There are several transgender managers on staff, as well, and Brown and Last assured me that trans employees are very welcome. However you identify, Last explained, you’re encouraged to build it into your character.

This “you can do anything” mentality extends to the customers as well, especially kids. The main question they are encouraged to ask themselves as soon as they step into the fantasy world is: Who do I want to be?

At Bristol, kids participate in a knighting ceremony and meet the queen. During the ceremony, they are asked to assume the roles of knights and ladies.

“Last week, a 10- or 11-year-old girl pulls out her wooden sword and asks, ‘I can be a knight, right?’ Without skipping a beat everybody around her said, ‘Absolutely, you can be a knight. That is not a question,’” Last said. Whether kids want to be princesses or ogres, Bristol staff is there to encourage imagination and confidence, regardless of gender. “It’s a world of yes,” Brown added.

When many of us think of Renaissance fairs, we envision something akin to beer-guzzling bearded men boasting about their big swords and women serving said beer with cinched waists and prominently displayed bosoms—entrenched gender roles that spotlight women’s bodies and men’s role as protector. Visitors get ushered back 400 years to the late 16th Century when, despite a woman being on the throne, women were still considered the property of their husbands. Women could not inherit land or enter into professions such as medicine or law. So, how exactly can Renaissance fairs promote feminist values?

Last explained that the fairs cast a magnifying glass on the strengths and agency that women did have during that era, reliving and reclaiming their unspoken histories, especially the working class.

“Women are so integral to the society of 1574. We run the business. The husband has the name of it … he owns the building, but without his wife or daughter running his books and manning the front … running the household and taking care of the children … without the women, the society falls apart. […] That part of history is lost when you skip over it. And so what’s wonderful is that we have groups here that are historically based, but they push those roles and jobs that strictly women did to the forefront so that people can see that historically, we weren’t just sitting at home waiting to pop out some kids and waiting to see if we could go to the store.”

Last warned that not every Renaissance fair has this focus. For instance, other fairs might use the term wench as a slur. Wench, by the way, simply refers to an unmarried working woman. And those gender stereotypes we were talking about earlier? Bristol’s main response is “you do you.” Brown and Last agreed that regardless of whether they are dressed suggestively or not, every day they are flooded with compliments.

“It’s less that your appearance gets complimented, and more that your expression gets complimented,” Brown explained. “The fact that you appear happy, that you’ve chosen to wear certain things that display how you feel that day—that’s what the cast members and what patrons see. It’s not that you have the best body or the best eyes, it’s you look radiantly happy today.” 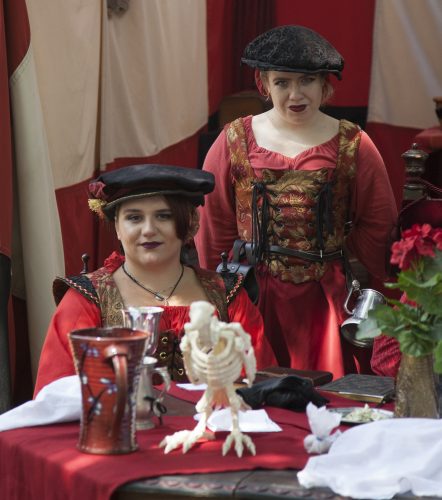 All the women I interviewed agreed that they kept coming back year after year because the place leaves them feeling empowered, as well as simply happy. As feminists, one piece of equity I think we all hope for are equal opportunities to find contentment, which is what many people seem to find here.

Perhaps this is why Bristol has had a such a successful history. It’s one of the largest and oldest Renaissance fairs in the country, with 1,200 cast members in costume each day. The fair has existed in its current location for 30 years but started out as a pop-up fair called King Richard’s 10 years prior.

Many employees came to the fair as children either as patrons or because their parents worked there. Cast members help raise each other’s kids, acting as honorary aunts and uncles to a slew of youngsters who grow up knowing Bristol as a second home. Last started coming to King Richard’s fair when she was eight. This is her 24th year as an employee.

Brown explained that because of the support she finds at Bristol, she has gotten used to finding acceptance.

“When I struggle with anxiety and worrying about what people think of me or this decision that I made, it helps that I’m conditioned here to get positive response and have people not question what I do or why I do it. It makes it easier to move forward and not get caught up in self-doubt.”

Through building characters, she taps into parts of herself she wants to explore and—back to her world of yes—her community encourages this self-exploration.

Like any community, Bristol speaks to some more strongly than others. But for those who are drawn to this particular fantasy realm, there are opportunities to be had. Who do you want to be?