So many sex toy reviews out there focus on the most powerful vibrators, the biggest dildos. (I’ve complained about this before.) I’ve noticed that a few independent fantasy toy makers have multiple sizes of their designs available, so clearly people are buying smaller toys, they just aren’t getting reviewed because those toys are most likely going to folx who don’t do reviews. So when Lust Arts, a fairly new company, reached out to me and offered some toys for review, I was so incredibly grateful, especially because I had recently discovered my own interest in fantasy-style toys and wanted to try more.

Lust Arts, founded by a pair of (self-professed) nerdy best friends, has a slightly different take on fantasy toys—namely, that most of their toys aren’t fantasy penises that fictional characters might have. They are the characters themselves. There is not a mermaid penis, but an entire mermaid. No alien penis, but an entire alien. You put whole characters inside you! This may sound like a lot, so a brief note on how their designs work.

All of Lust Arts’ toys are available in five different sizes (from the smallest to the tallest: Teaser, Pleaser, Moaner, Pounder, Screamer) and they have five different levels of firmness to choose from as well (Extra Soft, Soft, Medium, Firm, Extra Firm). They are all available in their own Lust Arts “original” colors, or you can choose your own, along with your own density/firmness. Some toys are available as dual density, meaning they have one type of silicone on the inside, and another on the outside.

This is another reason why I’ve fallen head over heels for Lust Arts. Not only are their designs exquisite pieces of art (truly), but you can completely customize a toy exactly to your liking. One of my favorite things about independent toy makers is that they frequently have much softer silicone available than most mainstream toy companies out there. And this is why their toys can be perfect for those of us with pelvic pain or experience painful sex. Lust Arts’ goal is to be accessible to as many folx as possible. Getting to know one half of the pair of founders via email for the last few months has been a delight.

I’ve been lucky enough to try most of their toys, and I want to do a round-up for you. Hopefully by the end, you’ll be able to tell if Lust Arts might have just what you’re looking for. 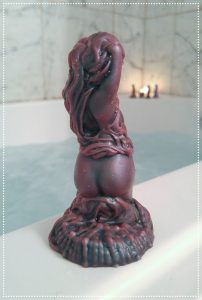 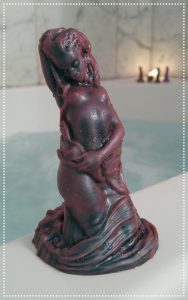 The Mermaid looks like a statue of the beautiful mythological sea creature in a seductive pose. She has long, flowing hair and just as long and flowing a tail. I chose the Mermaid in a Lust Arts original color: Coral Dreams, which is color-shifting blue/green/red/violet over shimmering black. This was the first Lust Arts toy I ever saw up close, and I was stunned by how much more beautiful they look in person (and they do still look beautiful online—but photos don’t do them justice). It could sit out on display and no one would know it was sex toy.

Lust Arts warned me that the Mermaid has a lot of texture and might be too intense for some people—but I had also recently learned that I like texture. I was up for the challenge as long as the size of the toy was small and the density was soft. It turned out to be a magical combination. Inserting the Mermaid slowly, I can feel all of its curves enter me. I love texture around the vulval vestibule (spiffy term for “entrance of the vagina”) and it has plenty. There are a couple of noticeable “pops” along the way, most notably when the curved torso and buttocks enter, but with the soft density, they aren’t painful pops. I either let the Mermaid sit in place during other types of stimulation (like clitoral), or thrust it very, very slowly.

Size-wise, it’s perfect. The Mermaid isn’t just a Teaser, it’s a total pleaser, so Lust Arts’ size names are actually all relative! The Mermaid is so shimmery and the details—the hair, the eyebrows, the tail—are infinite. I feel like I notice something new in the design every time I look at it. The edges of the Mermaid are rounded, which makes the texture feel more massage-like than sharp and poke-y. I can’t explain it, but slowly inserting what looks like a little mermaid statue is…actually rather exciting. 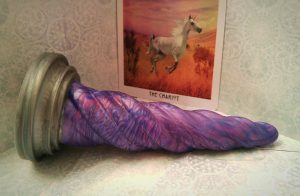 The Unicorn Horn was the toy that showed me just how amazing and easy it is to work with Lust Arts. Their original colors are so beautiful, I almost just chose one of those, but then I had an idea: a unicorn horn in the colors of the bi pride flag (pink, purple, blue). How perfect would that be? I asked Lust Arts if it would be possible and the pouring began. Lust Arts sent me several photos of the finished product, asking what I thought and if I’d like for them to give it another try. I would have been perfectly happy with it, but they were adamant that another iteration wasn’t a problem because they could just sell each pour as a pre-made toy on their site. Someone else was bound to love it! I happened to have a really specific vision in mind (which I was letting myself run with since I had the opportunity). Lust Arts sent me their fourth iteration of the toy, after several emails back and forth, discussing specific colors and marbling. I ended up with an absolutely dreamy Unicorn Horn in four colors: pink, hot pink, purple, and blue sparkly swirls on a silver suction cup base.

The horn itself has a small rounded (not pointy) tip and the spiral texture on this beauty feels magical as the horn gets progressively larger toward the base—I love the feeling of slowly being stretched. The soft silicone gives it a forgiving flexibility so it doesn’t literally feel like you’re fucking yourself with a horn.

The Unicorn Horn is also dreamy in use. With less texture (and a more uniform texture) than the Mermaid, the Unicorn Horn can, for me, be comfortably thrusted slowly or quickly. The suction cup base is amazing because the addition doesn’t change the look of design at all, and can be stuck to pretty much anything with a smooth, flat surface and presto—you can actually ride a unicorn (horn)!! Because the horn is so soft and flexible, if I angle it properly, I can rub it against my clit as I move it in and out and orgasm without the need for a vibrator. I couldn’t love my super bisexual Unicorn Horn any more. It’s absolutely one of my favorite toys, and probably the perfect place to start if you experience pelvic pain or need a smaller—but still exciting—insertable. 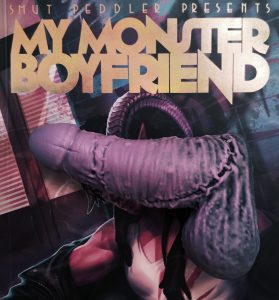 I chose the smallest size because it has such a girthy shaft and I selected one of Lust Arts’s original colors: Morbid Orchid (a perfectly accurate name), which looks like a sort of lavender poured over shimmery black. Frank’s Monster is patchwork, of course, just like the Monster himself. This dick is stitched together, from the head to the balls—the very large, eerily realistic-looking balls—and there are what appear to be pimples or boils here and there, adding to the morbid realism of the design. The shading of the shimmery black behind the purple gives the stitches depth, so it really does look haphazardly mended. But Lust Arts creations are anything but haphazard. Yet another toy whose (gruesome) magnificence can’t be captured in photos, it is evident how dedicated and passionate Lust Arts is about their work.

But how does it feel, fucking Frank’s Monster? Less satisfying than the Mermaid and Unicorn Horn, but a fucking good time nonetheless. For some reason, the texture here feels almost more intense than the Mermaid and I’m not sure why. Maybe it’s because the shaft is so girthy and doesn’t offer any relief from girth the way the Mermaid does with its curves. Frank’s Monster, for me, must be thrusted slowly and, truthfully, the fulfillment for me comes in the novelty of the toy. I feel a little wrong fucking a patchwork monster dick, and I like it.

I discovered that I actually enjoy flipping Frank’s Monster upside down so the balls are pointed up—I put some lube on them and use them to stimulate my clit as I thrust. I would probably enjoy it more if the shaft was a quarter of an inch or half inch slimmer (in circumference) and about a half inch longer. It’s a short and stout little guy, but maybe that’s your thing. If you can take girth, and don’t like much length, Frank’s Monster would be perfect for you.

Lust Arts has one other design I haven’t tried yet, though I do have it—their delightfully creepy Lust Burster. I’d say I can’t wait to see what Lust Arts does next, but I am lucky enough to already know! They have a dragon design on the way, and it might be my favorite Lust Arts design yet! Read a bonus review of the Mosswood Dragon on my Medium account now!

My unending gratitude to Lust Arts for their smart, intricate, nerdy, and accessible designs!

Nicole Guappone is a freelance writer living in Chicago, previously published by Rolling Stone, Glamour, The Rumpus, The Establishment, and more. Much of her writing and research focuses on sexual health, sexuality, and kink from a pelvic pain perspective. Read more of her work and find out about her consulting services at https://nicoleguappone.journoportfolio.com/.