Have you ever been in a conversation with a man who is interrupting, mansplaining or just won’t stop talking and wished that you could say, “That’s it buddy. Three strikes, you’re out.”

New Mexico-born, Los Angeles-based comedian and producer Sammy Mowrey has created a space where comedians can do just that in a lighthearted, fun-loving environment with the show Femmes the Rules – a stand-up comedy show “where men get interrupted” – that they co-host with Bailey Norton. Mowrey and Norton are taking the show on the road for a special performance at Chicago’s Lincoln Lodge on Sept. 8, 2021.

“The premise is technically feminist but I think it’s a show for everybody who has good humor about themselves,” said Mowrey by phone late last month.

Femmes the Rules features a lineup of female and non-binary comedians who each wreak havoc on a male comedian’s set to hilarious results.

“The men prepare their material but it gets thwarted pretty fast. Besides just interrupting, the women and non-binary partners are allowed to give them rules – arbitrary rules or strikes – and three strikes and they’re out. The man has to get off stage and all of the remaining time goes to the other person’s set. So it’s a conflict of interest on purpose,” said Mowrey. “What fans can expect from the show is we pair up people who have really great rapports and know how to back up each other well. It’s a night of riffing, ribbing, roasting and sometimes it devolves into chaos. We’ve had people make the man do physical challenges, make him do push-ups, choreographed dance numbers or just interrupt and make fun of him. It’s going to be really, really funny.”

Mowrey – who lived in Chicago from 2015 to 2018 – recruited some of their favorite Chicago comedians, including Deanna Ortiz and Audrey Jonas, to perform at The Lincoln Lodge edition of Femmes the Rules.

“I loved watching them perform when I lived in Chicago a few years ago – I recently saw Audrey at Lincoln Lodge in June – and I think they are so funny. When we book people, we book folks that are really quick, and I think that describes both of them really well,” said Mowrey. “Deanna has her podcast Crushes!, which is really, really funny, and Audrey I feel like has been hosting at Zanies a lot lately, so they both are honestly crushing it. I’m excited for the partners that they picked as well because one of them picked Andy Fleming, who is just a big weirdo and I think he’s going to be very fun to both riff with and make fun of. He’s very down with that.”

Along with co-hosting the event, Mowrey will also be interrupting Best Night Ever producer Mike O’Keefe as he performs stand-up.

“I love Mike O’Keefe. Rascal would be an understatement. He is so boisterous and so rough-and-tumble in a way with like a gravelly uncle voice. It’s going to be such a high-energy way to start the show,” they said. 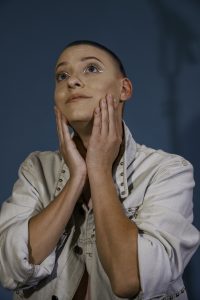 Femmes the Rules isn’t the only way Mowrey uses their platform to raise awareness to gender and sexual orientation-based inequities or advocate for change in regards to systemic racism. Throughout the pandemic they created hilarious TikTok videos poking fun at all kinds of stereotypical straight people, and they also came up with an ingenious way to raise money to support Black Lives Matter organizations.

“I raised money for different organizations for Black Lives Matter last year during the protests by selling titty pictures. A bunch of other comedians joined in, so it wasn’t just me obviously, and we raised a bunch of money. I think I raised $20,000 myself, and I think at some point the total was up at $50,000 or something, so that was really cool, except for the creeps who sent us all the same receipt [proving donations to Black Lives Matter organizations], which definitely happened, I’m sure,” they explained.

Mowrey is currently finding inspiration in creating new material and integrating it into their set along with producing Femmes the Rules, which will be held at The Clubhouse in Los Angeles beginning in October, and the new show, Permanent Vacation.

They explained, “Permanent Vacation is a new show in Los Angeles that is at a record store slash venue slash bar which has an amazing patio. It’s a vax-only space. We had our first line-up on Sunday and we sold it out. It was packed and there were lots of really great comedians.”

What Mowrey isn’t loving is the jarring number of men at “bro-ey” open mics that still exist despite all of the progress of the #MeToo Movement.

“I was probably used to it before the pandemic. There are a lot of incredibly inclusive spaces here. I’m in a group chat with a lot of Chicago people who do go to mics all together. There’s just pockets of mics that are more bro-ey,” Mowrey said. “It’s jarring to see these places still exist even though most people – hopefully most people – are on board with gender inclusivity.”

If you, like most people, are on board with gender inclusivity while also poking fun at the traditional stereotypes of comedy, you will enjoy the hijinks of Femmes the Rules.

“Who should come to the show? Comedy fans who know what’s up. Female comedians who are very tired of male comedians. Feminists, queer people, male comedians and men who need to learn to ‘shhhhh,’” Mowrey said with a laugh.

They later added, sincerely noting their love for male comedians, “It’s not an overtly political show, but it is goofing on, I guess, the hell that is being around male comedians.”

Click here to pick up tickets to Femmes the Rules at Lincoln Lodge on Sept. 8 and head over to Sammymowrey.com to keep up with the comedian. More information about upcoming shows at Lincoln Lodge can be found at Thelincolnlodge.com.