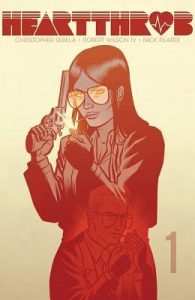 In Heartthrob, Callie Boudreax’s heart is full of love and escape plans.

Callie Boudreaux is waiting for her life to start.

Callie has a bad heart and as a kid, she’s told that she can’t play on the playgrounds and ball courts like the other kids frolicking through their childhoods, and she must be careful if she wants to stay alive.

Heart transplants are a fairly new practice, but she still dreams of getting one and the life she’s always wanted. And Callie has a plan. She moves to a new city, works a shit job, and gets good enough health benefits to finally have the heart she’s always wanted. When Callie finds her regular, boring life waiting for her after recovery, she doesn’t want to go back.

That’s when she meets a man ready to lead her into a life of love and adventure. The love is so intense, she can feel him beating inside of her chest. Unfortunately, only she can see him. And he isn’t who the FBI is after.

Heartthrob, from Oni Press, is the story of a woman in love with her heart donor, a master criminal who leads the way into a life she never expected. Set in the 1970s, this crime romance travels the country with Callie playing Robin Hood for the insurance victims of her former employer. Soon, she’s built a crew and a hot streak. Her boyfriend, who is usually very present in their relationship (kinda have to be when you’re sharing a body), laments the jobs he’d planned that have now failed. We watch as Callie tries to hold onto the one thing she’s always wanted while following the love of a man who is all in her head.

A few of my faves combine in this release to tell this fun and gripping story. Writer Christopher Sebela wrote the dark, noir thriller “Dead Letters,” and illustrator Robert Wilson IV is known for his work on Image’s “Bitch Planet.” Heartthrob reminds me of the 1997 movie “Jackie Brown,” with a resourceful female lead pushing past her comfort zones for the first time. Wilson’s illustration style fits right into adventure vibe, and there’s even a Stevie Nicks appearance!