The Star Wars “Imperial March” is blaring over the speakers as we enter the Free MVMT Shop at 3649 N. Southport. A collection of friends and I have arrived for the “Move Like a Jedi” fitness class—a Saturday event hosted by founder and owner Ashley Rockwood. I was promised lightsabers and background music consisting of John Williams’s greatest hits. I am given both.

The Free MVMT Shop specializes in unconventional fitness. The classes offered include traditional fitness courses like pilates and cardio, but Rockwood also offers unique classes like Animal Movement, Moonlit Yoga, and a Speed Movement Class that offers a quick-paced run-through of all drop-in classes within one session. The Free MVMT Shop also offers unique weekend classes, including Move Like a Jedi. Rockwood stresses that it is move like a Jedi (emphasis on the ‘like’). We are also given “light” “sabers”, not lightsabers™. The eyes of the Mouse are everywhere, like a litigious and squeaky-voiced Eye of Sauron, quick to identify intellectual property of the Star Wars franchise.

Most students in the class are wearing Star Wars merchandise. A large portion of students learned about the class through social media. Eden, one of the participants decked out in Star Wars gear, said, “It was on the Southport Corridor Facebook. I saw the lightsaber class and decided we had to come.”

Most students are also drinking—the class allows those involved to bring drinks to add to the party atmosphere. “It’s a great Saturday activity, with beer,” said Lee, another student.

The room has a party atmosphere. In the interim before class starts, most of us practice stabbing one another with lightsabers before falling dramatically to the floor, twitching in imaginary pain. But here is the thing about training as a Jedi—accidental mutilation seems like it would be a bigger problem than it actually is. Our sabers are plastic with small buttons on the hilt that cause them to light up in green, blue or red. I chose green, in homage to Luke Skywalker at his hottest in “Return of the Jedi.” Before the class has even started, I’ve managed to hit myself with the lightsaber at least five times. Were this really a glowing death sword, I would be mutilated and covered in third-degree burns. 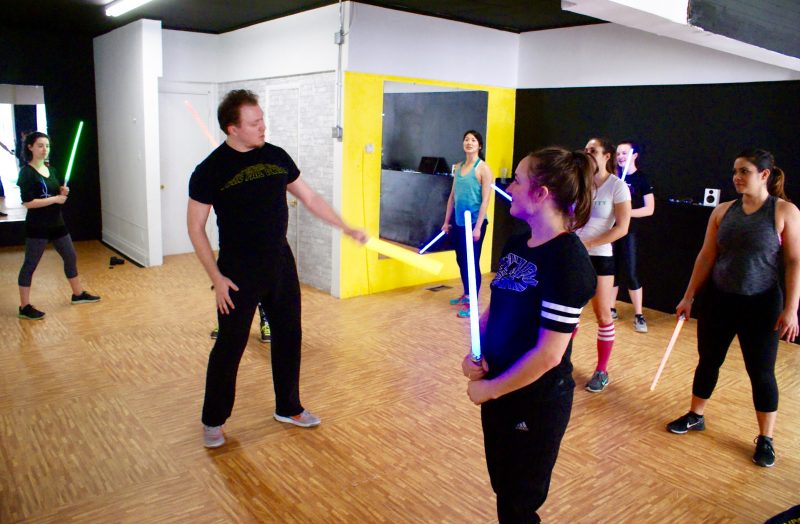 “The sword is an extension of you, just like the force.”

“This is a fake weapon without weight or resistance to it, so you can create different theatric experiences that are much more fun to play with,” says Andrew Trygstad, our instructor for the day. Trygstad is an actor and fight choreographer with extensive training in both stage combat and actual sword fighting. “You have to look at it as a completely mythical approach.” Trygstad points out that in the prequels, Obi Wan Kenobi repeatedly swings his lightsaber around his back as a form of defense, which would offer no protection whatsoever. Yes, I think, but it looks cool. I attempt the same move and accidentally hit myself with the sword again. There’s another third-degree burn.

“The techniques are based on a concept we don’t have,” Trygstad adds. “It’s as though the force is a continuation of you. It speaks to certain martial techniques that preach that the sword is an extension of you, just like the force.”

This course is one of many hosted by the Free MVMT Shop, and Rockwood has dedicated Saturdays to offer special, pop-culture classes in the pop-up. “The weirder [the class], the better,” says Rockwood. “This idea of a specialty class is a great way…to approach different groups, which is my goal. You don’t have to look a certain way to be here—this is for everybody.”

Rockwood, a professional dancer and former company member with Giordano Dance Chicago, has performed in a number of different roles, ranging from the Lyric Opera of Chicago to commercial work with Beyoncé. Her decision to create a pop-up fitness center stems from a desire to create a community hub that allows for different movement styles. “I always had the goal to have a space where people can come together for some reason,” said Rockwood. “I wanted to bring people together, and it organically became this place for people to move and take classes.”

The pop-up itself is a fitness studio converted out of an old Spotless Cleaning. There are still signs that the place was once a dry cleaning business; the awning overhead is labeled with the Spotless Cleaning logo in faded letters, but inside the studio is a large, airy room with mirrors lining each wall. Any free space within the building is covered in murals with contrasting artistic styles. One wall has a graffiti logo for the Free MVMT Shop, while another wall is covered in designs that replicate the motions that the students perform in class. The overall effect is a busy one; it feels like the studio is constantly in motion. Overhead are tin tiles in an elaborate art noveau design. “These were covered with a drop ceiling,” Rockwood tells me as she gestures at the tiles above us. “If we can get this ceiling off, I’m taking it wherever we go next.”

“My goal is to create a hub for people to gather for the sake of movement,” says Free Mvmt Shop Founder Ashley Rockwood

After several weeks of stalking real estate websites, Rockwood found the former dry cleaning store that had been empty for a while. She signed the lease on Dec. 1, 2017, and spent the next month going about the business of making a fitness studio. In a one-month period, Rockwood signed a business license with the City of Chicago and set about converting the long-abandoned cleaners into a working gym. The lease for the pop-up is for only four months, but since signing the lease in December, Rockwood has transformed the dilapidated store into a modern space for dance and movement. “We want to add little things as we go,” Rockwood says. “My goal is to have every wall covered because by April this place is getting torn the ‘f down.”

Portions of class sales are being donated to different social programs and events. Revenues from January classes went to Embarc, a Chicago program that provides opportunities to low-income high school students, while February sales supported GirlForward, an organization that supports young girls displaced by global conflict. March class sales helped support the Green Star Movement, while April classes will help fund SocialWorks. Rockwood’s focus on donating to Chicago-based organizations with a positive social impact reflects her own goals for the Free MVMT Shop.

“It [the Free MVMT Shop] is like a community center. My goal is to create a hub for people to gather for the sake of movement. I think people feel good, generally, when they know they’re not just doing something for themselves but also for someone else. Coming through a space and taking a class to support something like that will impact you.”

The end of the session feels very final. This might be because the last half hour of the course was dedicated to creating dramatic death scenes between sparring partners, but also because the nature of the pop-up means we will never experience this class, filled with these people, again. As a result, students linger in the studio at the end of the class, practicing the moves they spent the past 90 minutes refining. I am tired, mildly drunk and heartbroken at the prospect of giving back my lightsaber. Students slowly filter out, reaffirming the need for another Move Like a Jedi class on the pop-up schedule.

“You have to enjoy it while you have it,” adds Rockwood. “Don’t just walk in and think ‘one day.’ It’s in your neighborhood, you walk by it every day, come in and take the class!”

The Free Mvmt Shop closes for good on April 27. Book classes here before the magic ends.