“It’s necessary to block out more and more things these days.” — Aaron Hawkins

I voted early last week wearing a Black Panther hoodie and a scowl. the voting official gave me my “I Voted Today!” sticker, and I resisted the urge to yell how dirty I felt or how pissed I was to other black folks still waiting in line, but I’m fairly certain they could see it on my face. cause I can.

Why was I so angry, you ask? well, for one, the fact that Donald Trump’s name was on the ballot, confirming that this is in fact real and not some shitty practical joke. that despite blatant, self-congratulatory racism, sexism, xenophobia and overall inhuman, despicable behavior, his name wasn’t ripped off the ballot before it was too late. it is, in fact, too late. this is happening. and the bastard had the nerve to put his middle initial, too. *grumble grumble*

and so, as a member of Team #IGuessImWithHer and Team #GirlJustComeOn, I did my civic duty and left.

a lot of black people talked about not v 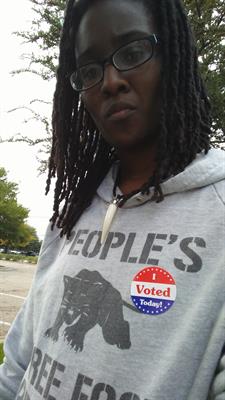 oting this year, and I’m here for it. our ancestors fought for the right to vote for candidates who represent us and our best interests (and at the very least, you know, common sense), so I support anybody who’d rather skip the polls and craft the newest drinking game. may I suggest taking a shot every time they incorrectly or prematurely call a state?

not voting doesn’t feel like an option for me in this election, even if it doesn’t mean anything in the long run (hey Electoral College hey!). but on the off chance that it does, Texas has been declared a swing state, and I can’t tell you how often I felt like my vote didn’t matter in this red-ass state. I’m excited about the possibility of turning it blue, and yet livid that it’s gonna be under Hillary fucking Clinton.

lemme make this clear – I’m not afraid of Trump. I’m worried about the white racists who feel galvanized in the wake of his campaign to act on their unwarranted fear.

what is absolutely an option is participating in this election cycle that’s been hell on my mental health. between deleted emails and Trump either consciously trying to throw this election OR seeing how far he can go before someone calls his bluff, we’ve jumped the shark so much this stopped being a reality show and turned into a “South Park” movie. I’ve really stressed prioritizing self-care because I can’t take a serious look at the newscycle without my gag reflex kicking in. like, I really don’t have the stomach for it.

tuesday is a no win-situation for people of color. we lose on both ends. whatever ties Trump has to Russia spells bad business (and possibly World War III) for the entire planet. whatever Clinton has planned most assuredly does not include demilitarizing the police or prioritizing the safety of black, brown or poor people in this country.

we don’t just get the short end of the stick – we don’t get a stick. they’ll just confuse it for a weapon and shoot us anyway.

and you know what’s the kicker in all this? if white people just confronted their racism and how it pervades our society, if as a whole white Americans got honest and open about what they are really afraid of (which is high-key extinction and low-key the wave of irrelevance that’s waiting to wash over them) and then made actions to reverse systemic oppression, then we could all live together in something like peace or maybe leave each other the hell alone.

I’m also for Obama ‘nem deciding to not leave the White House altogether. is that a thing that can happen? where’s Olivia Pope when you need her?

(Photo courtesy of The Gay Stoner)