On her debut full-length comedy album Yell Joy – coming out Juneteenth via Blonde Medicine – Joyelle Nicole Johnson guides listeners to the pre-pandemic feeling of laughing the night away at a packed comedy club. The album is comprised of four distinct sets – “Friday Early,” “Friday Late,” Saturday Early” and “Saturday Late” – each captured live at New York’s iconic Village Underground. Throughout the album, Johnson finds the funny in such frustrating experiences as dating, living with roommates and watching movies with her mom.

Each track further demonstrates Johnson’s unique talent for converting what would, for most of us, be aggravating scenarios into comedy gold.

“The best advice I ever got from someone when I first started stand-up was, ‘If you’re ever having a conversation with someone and you make them laugh, write it down because you could potentially use that on stage,’” Johnson explained by phone earlier this month, later adding, “I’m an autobiographical storyteller and I base it off of things that actually happen in my life that I was able to find some funny in. That’s my approach, just live life and laugh.”

Much of Johnson’s comedy is derived from unique interactions that she somehow channels into bits that seem like they were written just for you. She has an uncanny knack for writing jokes that connect on so many different levels that they are impossible to quantify in association with a place or time.

“I appreciate the evergreenness of it, especially now because it seems like all my comedian friends are talking about the pandemic and talking about being inside the house for a year. I’m trying my best to veer away from that so I can go to what’s relatable for everyone. On my Tonight Show set I talk about living with my boyfriend and going to therapy. Those are things that – whether we’re in a pandemic or not – we’re always going to talk about. I’m really happy that the bits are going to be evergreen,” she said. “Obviously, talking about Trump is not evergreen – thank the Lord, I’m super thankful that’s not evergreen – but besides that, all that material could have happened five years ago or it could happen 10 years in the future. You don’t really know.”

Johnson’s above-mentioned Tonight Show set, taped in early May, was an absolute smash full of exuberant delight from both the comedian and the limited-capacity crowd.

“Oh my goodness, it was an absolute dream. It’s everything you work towards – doing a late-night set – and to have that good tape to be able to be like, ‘I did it.’ It was everything that I wanted it to be except for the fact that I couldn’t bring anyone with me,” said Johnson noting her appreciation for the audience as well as the warm-up comedian.

While pandemic restrictions prevented Johnson from bringing along her friends and family to the taping, she found added support from The Tonight Show‘s house band, The Legendary Roots Crew.

“I was so excited,” Johnson said of performing in front of The Roots. “Black Thought stopped by my dressing room to say, ‘Hi,’ before I went on. I’ve partied with Questlove before so for me it was such an epic moment, especially being a Black person and having the quintessential modern Black band – hip-hop legends – right to my left. I could hear them laughing while I was doing it. The booker told me, ‘OK, The Roots are going to be there and they are going to be laughing so don’t play to them.” It was really hard for me not to completely face them and do all of my stand-up to them. It was an absolute dream like bucket list, cross it off, even though I didn’t know that was on my bucket list. I’m so thankful. You can’t tell me nothing now, The Roots played me out.”

As well as being hilarious, Johnson’s Tonight Show set was notable as it raised awareness to Juneteenth, which is also the date she chose to release Yell Joy. 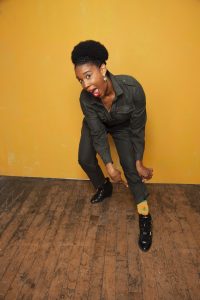 “Making Jimmy Fallon say Juneteenth really just touched my heart,” she said. “And the fact that he didn’t say June 19 because I’ve done radio interviews and they’re like, ‘Juneteenth, June 19,’ He just said Juneteenth so I think that’s something where someone might hear that and go, ‘What did he say.’ And now we’re going to Google. And then, ‘Oh, my gosh did you know this.’ And now we’re having a discussion. It’s something that promotes discussion, but also, I want to make people laugh so we’re laughing but we’re also learning.”

When the team at Blonde Medicine asked Johnson which day in June she wanted to release Yell Joy, she immediately knew Juneteenth was the only option.

“I’m an African American. I can trace my roots back to a plantation in North Carolina. I’ve met the descendants of my slave masters. That’s something that travels with us. We talk about trauma and how that travels with people and you can make light of it. Black people, we’ve been through a lot of struggle and we’ve been able to make humor out of it. I’m a person who’s been through struggle and I can make humor out of it. For me, that’s such an important date that a lot of people don’t know about. It just became a holiday and people are like, ‘What’s Juneteenth?’ We didn’t get taught about that in school. It’s a very important day for me,” said Johnson explaining that, growing up, her family educated her about Juneteenth, the Tulsa Race Massacre and other historic events.

Johnson is no stranger to using her platform to help educate fans on important topics. She has toured with Lizz Winstead‘s Abortion Access Front and speaks about the importance of calling senators and representatives to advocate for women’s reproductive rights among other topics.

“Being able to do comedy and activism is the dream, so I’m so thankful that I can do that,” she said.

On top of everything else, Johnson has an impressive acting resume that includes credits on Crashing as well as upcoming appearances on PAUSE with Sam Jay and Search Party. It seems all but pre-destined that Joyelle Nicole Johnson will soon be a household name.

“One little bit part line at a time, you’re gonna see Joyelle popping up,” she said with a laugh. “I’m going to be the Samuel L. Jackson of little bit lines on television shows and people are gonna be like, ‘Who is that?’ Yeah, I’m Joy. Remember.”

Click here to pick up a copy of Yell Joy on Saturday, June 19. You can keep up with all things Joyelle Nicole Johnson by following her on Instagram and Twitter.