When people hear the name Kat Von D, they often think of her visual art and the intricate tattoos the LA Ink star creates at her iconic shop, High Voltage Tattoo. However, music just may be her first artistic love. At the age of five, Von D’s grandmother began classically training her – and her siblings – on the piano and thus began a lifelong love affair with songwriting that is culminating with the Aug. 27 release of her debut album, Love Made Me Do It.

Big bold soundscapes give strength to brokenhearted vulnerability throughout 12 atmospheric, synth-laden tracks. In a phone call earlier this month, Von D shared insight into her songwriting process as well as her excitement to share Love Made Me Do It with fans.

“When ‘I am Nothing’ came out, there were so many people that I think were experiencing the same things that I was feeling during that time [when writing the song] and if my music can help people feel less alone in their emotional life, then that makes me very happy,” said Von D of the dreamy single. “Music has always been a savior to me in my dark times, so it’s exciting to be able to do that for others. I think a lot of people were expecting my music to be like metal or whatever because I’ve always been such a huge fan of metal, but I think some people are really pleasantly surprised. There are pop elements to it, but we really love synthwave and we love the sound of analog synths, so I think the album’s got a modern flair with that.” 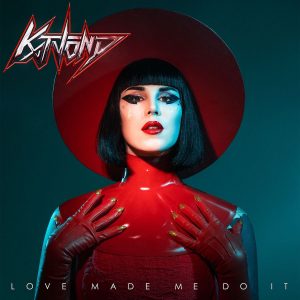 The album’s debut single “Exorcism” introduces listeners to the overall vibe of the project as it beautifully weaves melancholy into an upbeat, driving song.

“I love ‘Exorcism.’ I feel that there’s so many love songs out there that talk about the correlation between death and love or drugs and love. I was always fascinated with demonic possessions,” Von D said. “You hear about it in every culture and every era, every time, It’s such a common thing. Some people think it’s folkloric and other people have a spiritual connection to it. When I think about love and even the title of the album Love Made Me Do It, it’s kind of putting the blame on an outside force that is inspiring you to do things.

“Exorcism” is one of the earliest songs Von D wrote for Love Made Me Do It, an album that she started about 10 years ago. She played an early demo for Sammi Doll (IAMX) and found not only a “kindred spirit,” but also the first member of her band.

“I sang on a few songs on the last IAMX album, so when they toured they invited me to come along and play a thing with them on some tour dates, and that’s when I met Sammi. At the time, I had demo versions of ‘Exorcism’ and I played it for her and she loved it and she was like, ‘Man, if you ever need any keys, let me know. I’d love to play.’ I think we’re kindred spirits. We hit it off so well.”

Gregg Foreman AKA Mr. Pharmacist (Cat Power, Gossip) and Dave Parley (Prayers) soon joined the band on synth and drums, respectively, and contortionist Brynn Route completes the equation with her awe-inspiring visual artistry, which was recently featured in the Linda Strawberry-directed music video for “I Am Nothing.”

“I remember when we were filming it, I looked around and everybody was hypnotized. I could watch Brynn dance for hours,” Von D said. “Seeing her do it drenched in glitter was even more spectacular. I really enjoyed doing that music video.”

Finding innovative ways to bring the music to life in a live setting was never far from Von D’s thoughts when creating Love Made Me Do It.

“One of my bigger pet peeves when I go and see a band play is if somebody is just standing stagnant at a mic. I want to see the storytelling. I want the presentation of the music to be able to tell the story in a visual way. We’ve been working during this whole entire lockdown on the visuals and set design for our live performances because I think going out and touring is going to be an amazing experience,” said Von D, noting that she wants each show to be amazing for everyone in attendance.

In fact, a pair of sweeping instrumental tracks, “Intro” and “Interlude,” were originally conceived as concert enhancements, but they proved to be pivotal to the cinematic storytelling of the recording, so they ended up on the Love Made Me Do It tracklist.

“I love instrumental, cinematic sounds, and my band and I actually wrote those two tracks together during the lockdown. We were designing a soundscape for us to come onto the stage, but we loved it [‘Intro’] so much we were like, ‘We need to include this on the album,’” said Von D. “’Interlude’ was actually written for when we play live, it could be a moment where we go backstage and change outfits and Brynn could have her moment up front doing a specific dance to that song. What I love about the ‘Interlude’ in particular is it kind of gives you this anxiety. There’s an uneasiness to it. I think any time music makes you feel something, it can be powerful, and I like the idea of that.”

Not only is Von D’s band full of all-stars, she also collaborated with a dream team of musicians in writing and recording Love Made Me Do It, including Dave Grohl, Linda Perry (“Watching her write music is like watching magic unfold in front of your eyes”), Dave Sitek, Danny Lohner, Ladyhawke, Charo and Bauhaus’ Peter Murphy, who can be heard on “Protected.”

“Danny [Lohner] was the one who introduced me to Peter Murphy from Bauhaus,” said Von D. “I’m a huge Peter Murphy fan and a huge Bauhaus fan, so to be in the same sentence with him was amazing. He’s one of those legends that his voice is better than it’s ever been. I was really excited to be able to put his voice against a wall of synths in our style because it’s not Bauhaus and it’s not his solo stuff. It’s very different than what one would imagine hearing Peter’s voice against. I really love the song that we did together.”

Von D plans on tattooing “until the wheels roll off” and she will always have a passion for animals – her family recently adopted three ducks – as well as living compassionately. At present, music is her driving force and she is grateful for all the fans who have been patiently waiting to hear Love Made Me Do It.

“I’m excited because I wrote this album about 10 years ago and I just kept putting it on the back burner because we were filming the TV show and doing book tours and all that stuff. I’m so grateful that fans and followers have been so patient in waiting for this,” she said. “I’m excited to actually go on tour and play this live. I think a lot of people know me for tattooing and makeup and things like that, but I feel like music has always been the force behind all of it. It’s been the inspiration behind everything I do for so long.”

Click here to pre-order Love Made Me Do It in advance of its Aug. 27 release and keep up with Kat Von D at Katvond.com.