Masks are coming off! People are stepping out. And Chicago venues are putting on a host of shows that can be enjoyed online and in person.

Theater
Steppenwolf NOW presents the filmed play “Where We Stand” (June 16-Aug. 31) directed by Tamilla Woodard. Written, performed and composed by 2021 Whiting Award-winner Donnetta Lavinia Grays, the 70-minute piece focuses on community and accountability. “It’s town hall, it’s theater, it’s civic dialogue all in one place,” explains Woodard. “We’re going to get to grapple with a story and a decision together. There’s no right and there’s no wrong. There’s only the value of having the conversation.”

The company will also honor Annette Bening and Sherry Lansing during its Women in the Arts (June 22 at 12:30 p.m.) celebration. The free event features a live conversation with the honorees and Steppenwolf ensemble member Carrie Coon on YouTube and Facebook. Click here for details.

The Chicago-based production of “Ruth Bader Ginsburg: A Living Document” (June 12-16) employs a female and non-binary ensemble to tell the story of the legendary jurist’s life through scenes, stories, and standup. Written by Dianne Nora, the cast includes Tony Award-winner Blair Brown (“Orange Is the New Black”), Sadieh Rifai (“Easy”), Karen Aldridge (“Fargo”), Kirsten Fitzgerald (“Sirens”), and Sara Sevigny (“Empire”), among others. Tickets to stream start at $5 and are available at Play-PerView. Proceeds from the reading will benefit the ACLU and A Red Orchid Theatre.

The world premiere of Susan Chenet’s dark comedy “Dingleberries” (June 24-July 18) will be streamed via Interrobang Theatre Project. The company’s managing artistic director Georgette Verdin directs the virtual show about a middle school theater teacher on the threshold of her dreams. 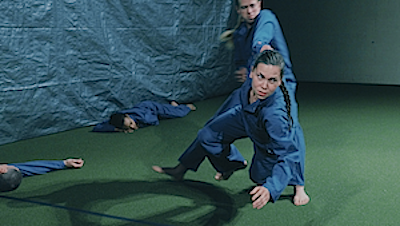 Dance
Hubbard Street Dance Chicago (HSDC) hosts the world premiere of the full-company work “Greener Grass” (June 24-27) on Vimeo. Choreographed and directed by former HSDC company dancer Jie-Hung Connie Shiau, the piece aims to raise awareness of the “re-education camps” which imprison Uyghurs, Kazakhs, and other traditionally Muslim minority groups in China’s Xinjiang Autonomous Zone. “As a Taiwanese woman who grew up seeing her own country constantly dismissed and silenced on the international stage due to pressure from the Chinese government, I am inspired to speak out against the Chinese government’s current efforts to silence and erase the Uyghur and Kazakh Muslims’ cultural identity,” says Shiau. “Of course, I will never be able to fully understand the pain of the Uyghurs and Kazakhs, but I’d like to use my voice as an artist to draw attention to these issues and encourage people to take action.”

As part of the “Zafiro Flamenco” 45th Anniversary Festival (June 18-20), Ensemble Español Spanish Dance Theatre will stage three live performances at the North Shore Center for the Performing Arts in Skokie. The program includes the world premiere of “Tangos de Granada” choreographed by Wendy Clinard, Artistic Director of Clinard Dance as well as the Chicago premiere of “Solea” choreographed by Nino de los Reyes. For tickets ($32-$42) to the live show, visit Northshorecenter.org. Tickets ($20) to the live video stream are available at EnsembleEspanol.org.