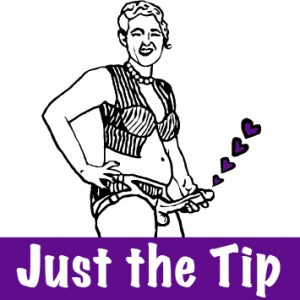 Just the Tip is a bi-weekly sex and relationship column from queer non-monogamous kinkster Jera Brown. Here you will find interviews with sexuality researchers and educators as well as smart and compassionate responses to anonymous questions. If you would like to be interviewed or have a sex or love question you’d like Jera to answer, email justthequestions@gmail.com or DM Jera on Twitter @thejerabrown.

Jera: When it comes to physical intimacy with trans or gender non-binary folks, what is an assumption around someone’s body or gender you find folks make that can unintentionally harm the connection?
Ren: Oh, there are so many! But I think one of the most common would be generalizing the way we think bodies should work and how we should use them. An example of this would be assuming that if someone has a penis that they can easily achieve and maintain an erection to penetrate a partner, or that the person would even want to use their penis that way.
Say someone thinks they’re about ready to venture into sexy naked time with a new trans or non-binary lover, do you think people need a deliberate conversation around how to interact and talk about the body when it comes to gender?
Absolutely! Communication is key to all mutually enjoyable sexual experiences. This doesn’t have to be (and I honestly believe it shouldn’t be) designated to trans/non-binary/gender nonconforming people. I think it’s fair to say that most people have feelings about how they want their bodies to be treated and talked about. Check in about where, when, and how it’s OK to touch, and what language is OK for specific body parts, regardless if those involved are trans or not. I say normalize these conversations by having them with every partner.
For many people, I think the thought of dating someone who is trans or gender non-binary is scary because they don’t know what to expect. Any advice for folks who fall into this camp?
I think a lot of that fear stems from not wanting to hurt another person by accidentally saying or doing the wrong thing. That is entirely understandable, but giving into that fear also leads to inaction, and in this case not getting to know that trans cutie at the coffee shop. There’s a lot of power in vulnerability; of not being afraid to say “I don’t know, but I’m taking it upon myself to do my research” or asking “Can you help me understand your specific personal needs and boundaries?”. When a trans person sees you trying, it’ll be easier to bounce back when mistakes happen. I know it sounds cheesy and cliché, but meet the other person with an open mind and open heart, and everything else will fall into place. 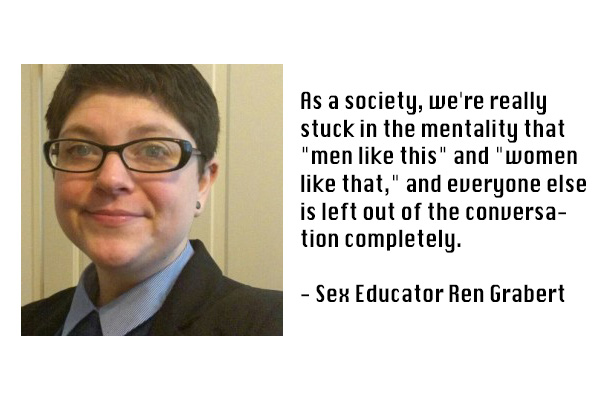 You’re giving the workshop soon at Early to Bed. What’s your favorite thing to discuss?
I love to discuss communication and sexual individuality. As a society, we’re really stuck in the mentality that “men like this” and “women like that,” and everyone else is left out of the conversation completely.  I love busting that myth and providing the tools for more pleasurable and satisfying sex. In this workshop specifically, I’m excited to talk about creative ways to use toys and barriers for trans bodies and activities people might not be aware of like “muffing.” To find out what that is, join me at Early To Bed on December 4th!
I am also really excited to announce that Early to Bed and I are partnering with All Cycles Chicago! All Cycles is a group of passionate Chicago community members who aim to bring menstrual supplies to folks in need. They gather anonymous donations of pads (no pantyliners, please) tampons, wet wipes, and underwear of various sizes and styles for homeless or income-insecure people in Chicago of all or no genders, who have cycles. Just before class, we will have a representative from All Cycles speaking about all that they do, and that evening we’ll be collecting period supplies for people of all genders.
Featured Photo by rawpixel on Unsplash
6 I like it
0 I don't like it