Katy Lynch already had a string of high-profile tech successes behind her and was the CEO of Techweek when she hosted a gender equity panel in 2015 that she says changed the trajectory of her and her husband’s careers.

The panel at Techweek LA was a discussion of the documentary “Code: Debugging the Gender Gap,” and Lynch says she found the description of how and why girls precipitously lose interest in STEM at a certain age “riveting.”

“I felt compelled to tell my husband about this,” she said, and they considered their combined years of experience in the industry — she as the founder of social media marketing firm SocialKaty, he as the co-founder of loyalty platform Belly — and what they could bring to educating the next generation of tech workers and entrepreneurs. That’s when inspiration struck: “We should start a company that teaches kids to code.”

Today, that company becomes a reality with the launch of Codeverse, which Lynch calls an “incredibly robust education technology program and coding school.” The vision is for an interactive space where kids use the company’s proprietary code, KidScript, to program objects in the room, build their own apps and offer them on the App Store. There’s also an online platform that members can access from home. KidScript pulls key concepts from other coding languages, so once children learn it, the idea is that they’ll know enough to also use JavaScript, Ruby and others.

Lynch says two things set Codeverse apart from the other coding schools and programs for kids: the ability to program objects and build apps in real time and the proprietary coding language. 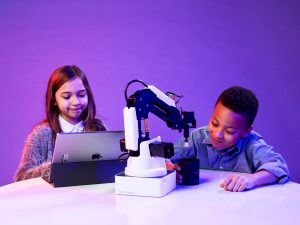 She said plans are under way for initiatives to address the gender gap that first attracted her to the EdTech space. And she acknowledged that gender equity is just one of the issues that tech has to face. (Launching on Equal Pay Day is a coincidence.) There are also plans to make the online coding platform available to non-members, and Lynch said the company eventually wants to make the technology available to schools and non-profits that work with children to increase the reach beyond the physical coding studios.

One key to opening doors in tech for girls is to educate their parents about why it’s important, she said. “Coding teaches you so many more skills other than just computer programming,” such as problem-solving, creativity and confidence-building.

Beyond the launch, the company’s goal is to roll out three more Chicago-area locations in the next 18 months and studios in each of the country’s major metro areas in the next five years. Around Chicago, the current proposal is for studios in Deerfield, Naperville and Oak Park.

In addition to Lynch and Ulliott, the partnership includes Dave Arel, co-founder/CTO of Roniin.

Registration for classes opens April 4, and the first 3,600-square-foot coding studio is set to open in July in Lincoln Park. Classes of 75 minutes will be available for 6-12-year-olds with packages starting at $125 a month. For more information, visit www.codeverse.com.