P!nk is a big deal. Since first beginning her radio domination back in 2000, her powerful voice has inspired millions of fans to go for their dreams and feel confident while doing it. She’s won three Grammy Awards and every single one of her studio albums has gone platinum (most many times over) – a fate that will undoubtedly be shared by her upcoming release, “Beautiful Trauma,” when it drops on Oct. 13.

Excitement is in the air whenever P!nk comes to town, but her Sept. 9 performance at the Hollywood Casino Amphitheatre in the Chicago suburb of Tinley Park felt extra special as the pop superstar had only performed a handful of one-off shows – rather than a full tour – throughout the summer. Most artists may have taken this opportunity to ease into their new material and maybe perform a stripped down, low-key set, but P!nk isn’t like most artists.

The show kicked off with a bang when the iconic intro of “Get the Party Started” blasted out of the speakers and P!nk emerged from the back of the crowd. As the singer made her way up to the stage, she hugged and high-fived lucky fans on the aisles connecting with as many people as humanly possible.

P!nk’s generosity of spirit and her enthusiasm for creating special moments with individuals was a constant throughout the night. After singing a gorgeously heartbreaking rendition of her “The Truth About Love” single, “Just Give Me a Reason,” she spoke directly to a young fan in the audience who was holding a sign revealing that it was her 12th birthday. “I cried everyday when I was 12,” she said. “Hang in there. It’s hard to be a girl, but it’s pretty awesome, too.”

Later, an intimate acoustic interlude – that concluded with guitarist Justin Derrico absolutely shredding during an out-of-this-world cover of “Babe I’m Gonna Leave You” – found P!nk once again singling out a group of fans to compliment their sparkly T-shirts as she prepared to sing “Who Knew.”

Just as P!nk’s music has meant so much to her fans, many songs have touched the pop star’s soul, helping to shape her into the unique talent that she is today. She shared unbridled love for fellow female front-women by singing authentic covers of such diverse acts as 4 Non Blondes, Bishop Briggs and No Doubt, whose “Just a Girl” made for the perfect mash-up companion to P!nk’s own “Funhouse.” P!nk also paid tribute to “another fierce female” with her fun and soulful take on the Janis Joplin classic, “Me & Bobby McGee.” 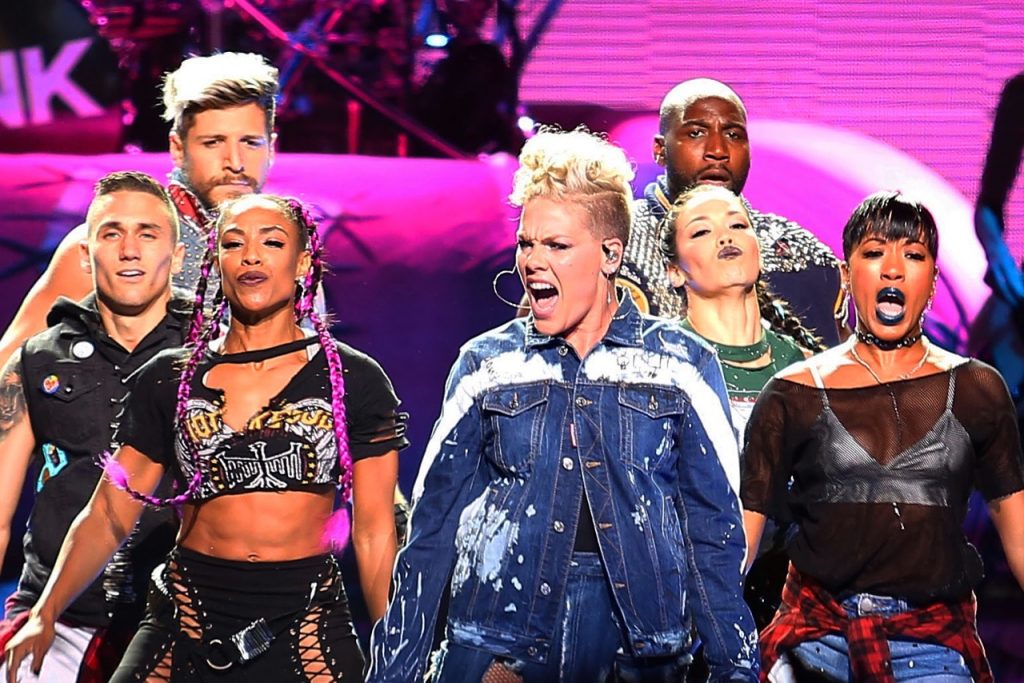 By the end of the night, it was quite clear that the truths revealed in P!nk’s 2008 mega-hit, “So What,” remain accurate to this day: P!nk is certainly “still a rock star,” she’s got unbelievable “rock moves” – including a high-flying aerial finale – and she’s “having more fun” than all of us.

Head over to www.PinksPage.com to pre-order “Beautiful Trauma” and follow P!nk on Facebook to keep up-to-date with her latest news.