Maria Hadden’s hand keeps raising up and down, like a lever that will automatically snap her arm up into a wave before lowering it just as quickly.

I have made the critical mistake of interviewing Hadden in front of the large shop window that overlooks Morse Street from her campaign office. Over the course of a two-hour interview, she waves at what feels like thousands of people making their way through Rogers Park. Hadden knows them all.

“She’s been here 11 years,” said Natalia Vera, Hadden’s long-term partner and senior research paralegal for the American Bar Association. “When I met Maria, she had such a community that people would always stop and say hi. She’s been building friendships here for more than a decade.”

Hadden, 38, is now using those foundational relationships to run as alderman of the 49th Ward. The decision to run was determined in March of last year. Although Hadden has completed undergraduate and graduate schoolwork for public service, and has years of nonprofit work under her belt, she had never considered running for elected office. After meeting with a friend to give a pep talk about starting a new job, Hadden’s friend flipped the conversation and asked what was stopping Hadden from facing a similar challenge.

“I thought about if for a month,” said Hadden. “I spent the month having lots of conversations with friends, candidates that I’ve worked with in other cities, elected officials, particularly other women and women of color in office, about their experience and whether they would do it again…Some of my primary questions for myself were do I think I’d be good at it? Do I have the personality traits and skills and relationships to be effective in the job of alderman? Do I think I could leave the work that I’ve been doing for almost 10 years and could I bring it with me, could I build on this and does it seem to fit in with what I’ve been learning and sharing? And also do I think I could win? And so the process of actually giving it full consideration was enlightening and…kind of a ‘duh’ moment because of course I would be good at that. Of course these skills of community-based, grassroots democracy work were absolutely transferable. Most of what I do is work with community members and elected officials to have better governance together. So why not do it myself, in my own community?”

Hadden’s background in community-based local government work is cemented by her CV: She is a board member for the Black Youth Project (BYP) 100, a chapter-based organization for black-identified people between the ages of 18 to 35 who strive to counteract systems of oppression, and executive director of Our City Our Voice, a nonprofit that works with communities to rebuild local democratic processes across the country. Hadden’s work with Our City Our Voice is linked with her efforts in Participatory Budgeting (PB), a decision-making process that allows citizens to prioritize public spending budgets based on allocated sections of a municipal or public budget.

Hadden’s opponent and current Alderman Joe Moore was the first to introduce this process in 2009, shortly after the housing market crash. Since then, PB has been adopted by municipalities across the country as a way to encourage civic engagement and allow residents more direct influence on key decision-making processes.

Hadden herself volunteered when Alderman Moore launched PB in 2009. “I finished that first cycle knowing that’s what I want to help other communities do,” said Hadden. “And so the researchers who helped us design our process here, I called them up and told them that I wanted to join them if this is what their work was. I’ve worked in about a dozen wards in Chicago over the years, and several cities around the country.”

Hadden’s work with Our City Our Voice is a continuation of that goal. “We work with communities who want to do PB and civic skill-building workshops,” said Hadden. “One thing I’ve learned in working in [these] places is that there are lots of people who know what the problems are—identifying the problem is not hard, and a lot of people can envision what a solution looks like, but being able to navigate existing government policies and systems to figure out not only how they work, but where they can intervene, is where people get tripped up.”

She’s not wrong—halfway through the interview I gave up trying to pronounce the mouthful that is “Participatory Budgeting” and started referring to it as, “That money thing.”

I appreciated that the first hour of our interview was dedicated to the “dry” material, because this election cycle has proven far more exciting than most. The midterm elections saw a record number of women running for office, and according to Aljazeera, more than 400 of them were black women.

It seems as though every article describing Hadden’s political run has noted that, if elected, she would be the first black, queer, cisgendered woman serving as a Chicago alderman. And this article is no different!

“I don’t represent all of the experiences of the people in the 49th Ward,” said Hadden. “But I do represent a lot of them…And I think that as we look at our new future, how do we set up and reframe a healthy democracy for the next 100 years, we need people who were not written into the Constitution. The diversity of our nation must be represented in government. So it’s not just important that someone with my identity has a voice at the table, it’s important to me and we need to see it reflected in other parts of our community.”

Hadden noted that some new voters have specifically sought her out, telling her they had registered to vote after learning about Hadden and her campaign. “If the identity is an underrepresented or marginalized identity, folks resonate with that,” said Hadden. “I think that’s been exciting people a little bit, but once I get people interested, I’m really boring to talk to and I have a lot of technical expertise. So people who don’t know me might see a picture and think, “Oh, she’s a woman, she’s young, she’s black,” I’m not just the same old candidate who has run before and I paint a visual contrast to the incumbent. It’s definitely been a lot to excite people and get them to take notice, and then it’s the regular work of any campaign to get them to want to vote for me.”

Mike Schoen is one constituent involved in the campaign and an attendee at Hadden’s office hours. “My husband and I always try to do what we can, but for this election we’re motivated to get even more involved,” said Schoen. “I’m a strong, strong believer of being active in local elections. That, on a daily basis, is what’s really impacting you in your life. That’s where laws are being made, where programs are being put into place that actually impact your daily life. On the presidential level, it’s such a high level, and you may not being personally impacted but when it’s a local community? That’s your daily life, where you are.”

The work of Hadden’s current campaign is intense—at the moment, her campaign is in the petitioning period. Hadden starts out the day as early as 5 in the morning with campaign-related work and meetings before going to work as executive director of Our City Our Voice. After her 9-to-5 job is over, Hadden returns to the campaign center for office hours, calls, or canvassing door-to-door to collect signatures. A notary signs off on the minutes at the end of the day, and the entire process starts up again the next morning. It seems as though there is always a small contingent of people nearby; volunteers, family, friends. Her office is a collaborative one.

“I have drawn on, and will continue to draw on, a lot of mentors and people who know what they’re doing,” said Hadden when I asked her about the value of group involvement. “As an example, it’s not within the culture of the City of Chicago for aldermen across wards to really work together collaboratively…Sometimes wards are drawn in ways that make it difficult to collaborate. That gives to not an official point, but it is a part of who I am. How we do things matters. The only way we address some of the biggest challenges in the city is collaboratively. There’s no other way, in my opinion.”

Hadden described her years of experience working with neighborhoods across the city (from Hyde Park to Logan Square), her plan for neighborhood schools (she’s an advocate for mentorship programs to provide role models), her goals for community involvement (she wants to create Youth and Elder committees, while restructuring a Housing and Development Committee that isn’t invite-only), and the importance of working with other aldermen if elected (she’s in favor!).

As the conversation wound down and I gave up attempts to understand PB and its correct pronunciation, everyone else in the office slowly prepared to leave, making their way wordlessly to the door. Any office hours for the evening had been canceled following the fatal shooting of Eliyahu Moscowitz and Douglass Watts. They were execution-style murders that took place within 36 hours of each other. “Senseless” has been used to describe these murders in most news reports, and this article is no different—there has been no motive and no leads on either attack. I asked Hadden about issues like gun control and how aldermen might be limited in a city plagued by gun violence.

“The alderman can’t solve crime and the role of the alderman won’t be to prevent this,” said Hadden. “Those are limitations. Joe Moore couldn’t have prevented what happened and I won’t be able to either. When I talk about violence prevention in the neighborhood, there are a lot of proven ways that work for certain types of violence…But what we have this week is a random, senseless, unknown motivation and not an economic crime. And there’s real limitations there… 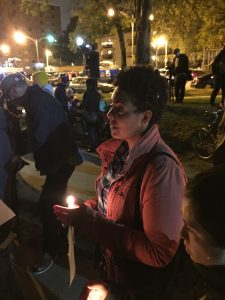 The role of a representative is to be a centering point for the community and figure out ways to move forward.”

A vigil for the victims was held on Loyola Beach, and dozens of Rogers Park residents (old and new) gathered together to mourn. Emotions vary between attendees—you can tell who knew the victims by the expression on their face. I ask Vera if Hadden knew either of the victims. She didn’t, Vera assures me. But she’s there, hand raised in greeting to comfort those around her.