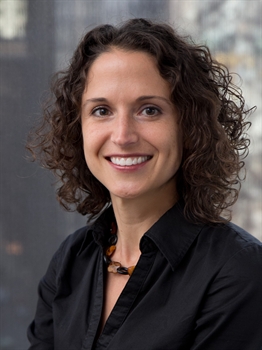 Marisa Novara is a self-described “neighborhood nerd.” After a year in Italy getting a master’s in urban planning, Novara returned to Chicago as a project manager at the nonprofit Metropolitan Planning Council, an organization that promotes planning policies for the Chicago region. She is currently overseeing a contest to recognize the best temporary use of vacant space in metropolitan Chicago, places where neighbors and community groups have independently transformed empty lots and storefronts, without waiting for permission from the city or private developers.

What drew you to this line of work?

My interest (in urban planning) came out of a passion for community development. … I’m kind of a neighborhood nerd. I find how groups of people make spaces and how they made decisions about how they spend their lives fascinating. I love sitting around talking with people: “So, tell me why you guys do that? What is it that makes you do it this way? Oh, that’s interesting.”

When you combine that with history, particularly in a city like Chicago, where there’s so much neighborhood history, with so much based in segregation patterns and how populations settled largely because they had to based on racism and racial covenants (in property deeds) – the understanding of how people came together makes for a fascinating field.

What are some good examples of temporary uses of space in Chicago?

I’ll give you an example from North Lawndale, where I live. There’s a short, dead-end block that had a couple vacant lots on the corner. No one knew who owned them. Whoever it was was completely an absentee owner, had been for as long as anyone remembered. For the longest time there was sort of a gathering point for people to hang out, in a negative sense, and it really set the tone for the whole block. People felt that they were better off just staying in their houses.

Well, there were two women on this block who’d been doing some after-school activities with kids on that block, and they were looking for some space to do gardening and some theater projects. Eventually they realized, here’s all this land no one’s putting to a positive use … why don’t we just use it? They got lumber and dirt donated, and they created gardening beds. They raised money to build a stage, and they painted signs that said, “Be the change you wish to see in the world.” And it has completely changed the tone of this block. It has shifted the dynamic from people feeling a bit under siege, to feeling in control.

If this owner shows up some day, there’s nothing on that space they can’t pick up and move. What’s interesting about this is, it’s a bit stealthy. On the one hand it’s easy to see this kind of stuff as nicey-nicey; oh, you made some nice signs. But it’s actually incredibly powerful and life changing when you shift from waiting for permission from all these invisible hands, in terms of the market, in terms of financing, to say, you know, I can change something about this and I’m going to.