61
SHARES
ShareTweet
The founders of the Lesbian Herstory Archives have dedicated their lives to preserving the lesbian community’s stories, and with her film “Love Letter Rescue Squad,” filmmaker Megan Rossman is doing the same for them.

The seven-minute film is part of a feature-length documentary Rossman is working on about the Archives’ founders, including Deb Edel and Joan Nestle. The Archives, housed in New York City, is the world’s largest collection of materials by and about lesbians.

You can see “Love Letter Rescue Squad” at 9 p.m., Thursday, Sept. 28, at Reeling: The Chicago LGBTQ+ International Film Festival. The film is being screened as part of  “Lives: Visible | SHORTS!” Click here for tickets and more information.
Full disclosure: Megan and her partner are two of my favorite people in the Universe. We’ve volunteered together for years as mentors for the student project of NLGJA: The Association of LGBTQ Journalists. I tried not to #fangirl her too much during this email exchange, but I couldn’t help myself at the end. Trust me, if your fantastic friend’s film won an award at Cannes, you’d fangirl her, too.

How did you decide to focus on the Archives?

I wanted to do a story about a senior LGBT activist as part of a scholarship application. The Lesbian Herstory Archives is in my neighborhood, so I reached out to them. Both Maxine Wolfe and Deb Edel said they’d be happy to do an interview. That was the beginning of a multi-year, multi-film journey.
This is part of a feature-length documentary project –  how is that going?
It’s going really well! I’m wrapping up production this month and have moved into the editing process. The feature is set to be done in May 2018.
Where else has this film screened? 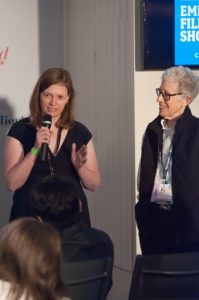 Rossman and Edel doing a Q&A at the American Pavilion at Cannes Film Festival in May 2017. Credit: Amirah Parker.

“Love Letter Rescue Squad” premiered at the American Pavilion at the Cannes Film Festival, where it won best student documentary. Since then, it has played at Outfest in Los Angeles and at the Cinema Queer International Film Festival in Stockholm, Sweden. In October, it’s having its New York premier at NewFest.

What has the experience of interviewing the founders & other women been like?
It has been really empowering. I came to the archives looking for a piece of myself, and through this process, I’ve gotten more comfortable with who I am. That’s the thing that’s amazing to me: Here are these women who’ve been through what you’re going through, and they’ve not only survived, but thrived. It gives me hope.
What can audiences expect?
Audiences will learn about how a group of lesbians rallied to preserve their history and see some of the materials the group has collected.
What do you make of the idea that the lesbian identity is disappearing?
I’ve been asking that question a lot in my interviews for the feature-length project. What I’ve realized is that “lesbian” is just a word. The language was different when the Lesbian Herstory Archives was founded, and it’s going to continue to change. Our community is evolving, which is great! But there are still people, including myself, who identify as lesbian.
How does it feel to be so Awesome?

Ha! What feels the most awesome to me is that this group of women has embraced me and this project with warmth and love. I’m so grateful for all of the support I’ve gotten – including from the women at the Lesbian Herstory Archives, my MFA program at Hunter College, the Princess Grace Foundation, and my dedicated partner, who gives me daily feedback on the film. It’s been one of the best experiences of my life.