‘Tis the season for making personal promises to improve our lives in the coming year. One easy and enjoyable way to guarantee more smiles in 2019 is to see, read and listen to more comedy.

Throughout the year we’ve asked some of Chicago’s funniest comedians to give their recommendations on everything from the best stand-up shows in the city, to the most hilarious improv troupes, to can’t-miss comedy specials. Check out their suggestions below and learn more about the comedians themselves with our monthly Chi-Town Comedy Chats column. 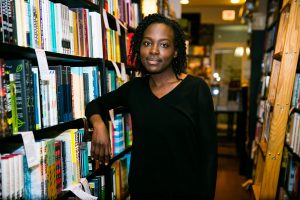 Every time I take one of my friends to see a Kates show, whether it’s at the Book Cellar or the Laugh Factory, people are always surprised by how funny everyone is and how women tell jokes on so many different topics. Go see The Kates.

fantastic, and Kevin Hart’s most recent book is almost self-helpy and also hysterical. Those are two that I really liked a lot.

There’s a podcast that I’m going to be on called “Inferior Men.” They’re Chicago-based and it’s a comedy business podcast. They crack me up.

Obviously, The Kates, Las Locas and all of the fantastic females in Chicago. Let’s see, what else? I really liked Jenny Mollens’ “I Like You Just the Way I Am,” that’s a great book. I’m a big comedy reader/listener nerd. 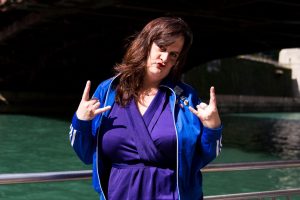 I love Scott Duff, everything he does. I also really enjoy – at Volumes Bookstore – Elyse Nylin does You Joke Like a Girl and I love Gwen La Roka, she cracks me up so much. She makes me laugh so flippin’ hard, and she’s also a wonderful human being.

I’m a big, big fan of Steve Hughes. He’s from Australia and has some really smart humor. He’s kind of tricking you into digesting this really smart medicine with these really dumb premises. 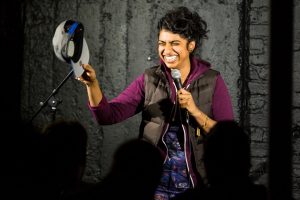 ainab Johnson. She is a lioness on stage. The formula of comedy is changing so much where it doesn’t have to be line, line joke or set-up/punchline. She’ll take her time and use powerful silences where you’re so captivated in what she’s saying.

And Tommy Tiernan, an old-school maniac from Ireland who has mastered the art of self-deprecation. I’m amazed that people don’t know him because he is one of my favorites. Tommy’s one of my go-tos. He’s so theatrical. 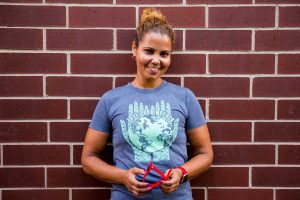 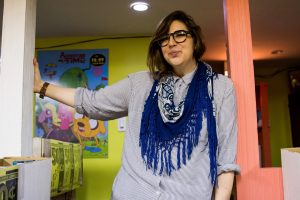 In Chicago, there’s a really great show called Ladylike that a bunch of really rad women run. The idea is mostly female and non-binary people tell gross stories about their bodies in whatever capacity they choose. That’s always a really fun show.

Every Thursday there’s always Cupcake Cabaret, and they do a really good job of bringing people together. They have an open mic and free cupcakes, which is really sweet. I love RAD in particular. It’s a really great show and so is We Still Like You every first Saturday of the month at the Flatiron Arts Building. 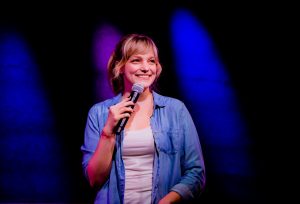 I would recommend that people watch Gary Gulman and Maria Bamford if they haven’t, but they should have. As far as locally, I always see really consistent comedy out of the Laugh Factory, but also Comedians You Should Know is always solid. If I was going to tell people where to go when they are in town I would tell them that Comedians You Should Know every Wednesday is the best bar show.

Reena Calm – Recommends Marty DeRosa and Comedians You Should Know

One of the people that I started watching in Chicago that just keeps getting funnier – it’s like, how does he do that? – is Marty DeRosa. He’s insanely good, and I wish everyone knew how funny he’s gotten. He’s with C 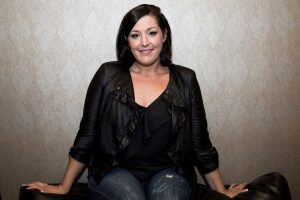 omedians You Should Know, and that’s my favorite show in the city. It’s every Wednesday, you can get tickets for $5 and it really has the feel of a New York comedy club. They have a really solid group of producers, and they sell out all the time. Doing that club makes me feel ready for anything. 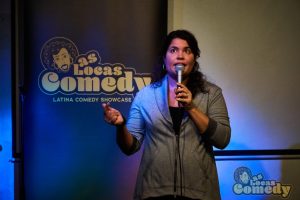 Kelsie Huff, for sure. If it wasn’t for her support, I wouldn’t be doing comedy at all. Alex Kumin, who teaches Feminine Comique now, is another one who really gave me opportunities… Sonal Aggarwal is a really good friend of mine so I’m kind of biased… I would also say my current associate producer, Jess Martinez. She’s new on the scene and she’s killing doing open mics, shows and group work five nights a week. And also helping out with Las Locas. It’s cool to see this new group coming up. They are really supportive of each other – meeting each other out at mics – and Jess has a lot of important stuff to say from a younger perspective. It’s cool. 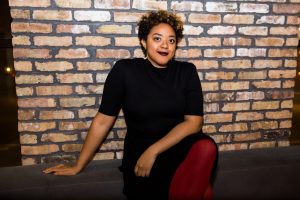 If you want to see stand-up, I think you should go to Comedians You Should Know or a Kates Show… “Insecure” and Ali Wong are the number one things you should be watching right now.

Click here to read full interviews with the above mentioned comedians and more. Here’s to a happy, healthy and hilarious 2019!