When Ohmme took the stage at Chicago’s Lincoln Hall for an April 10 STAGED livestream presented by Audiotree, fans knew they were in for a special performance. Not only were the duo, comprised of Sima Cunningham and Macie Stewart, armed with the material from their 2020 album Fantasize Your Ghost – which has yet to be celebrated with a proper tour due to the pandemic – they were also supported by a collection of all-star creative forces serving as their backing band.

Multi-instrumentalist Vivian McConnell – better known as V.V. Lightbody – drummer Spencer Tweedy, and Lia Kohl, Whitney Johnson and Karlyn Gehring on strings, helped Cunningham and Stewart to sculpt a set full of art, experimentation and the haunting harmonies for which the group is known. 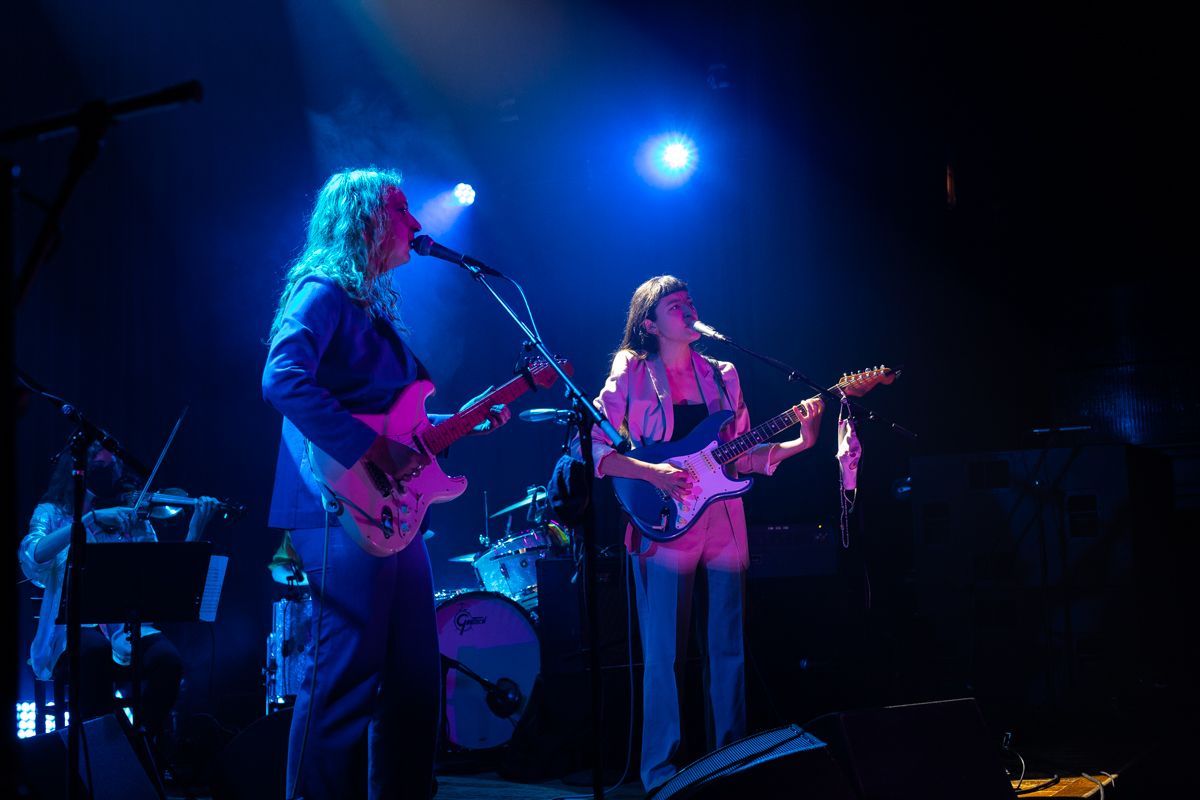 “This is literally a dream,” said Stewart after introducing the band while leading into “After All” midway through the almost hour-long set. 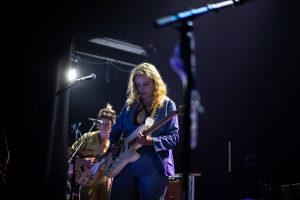 Alternating between harmonies and unisons throughout the Fantasize Your Ghost closer’s sauntering melody, the warmth of Cunningham and Stewart’s vocals swept streaming viewers away with ease. Elsewhere, the duo’s snappy hocketing on “Fingerprints” was as stunning as ever while their guttural howls on “3243,” arguably the most rock and roll moment of the night, were triumphant especially when framed by the context of the evolving difficulties of the past year.

“Different today, but I’m the same,” they sang atop Cunningham’s ascending guitar and Tweedy’s exacting rhythms.

While McConnell spent much of the night joining Cunningham and Stewart on guitar, “Spell It Out” found her on the flute. At a traditional concert, crowd chatter may have interrupted her delicate flutters, but the silent setting of an empty Lincoln Hall allowed her most subtle phrases to be fully appreciated. Instead of audible claps and cheers, fans showed their love for the entire band’s musicianship in the chat, filling it with praise throughout the set.

“Grandmother,” dedicated to everyone who’s been on their own for the last 14 months especially Cunningham and Stewart’s own family matriarchs, closed things out with a poignant yet playful climax. The song’s a cappella intro was followed by a walking bass line – exuding cool confidence – from Stewart that drove the song into a playful jam.

“We can’t wait to play for you in person,” Stewart said near the end of the night, a sentiment to which Cunningham added, “Get the vaccine.” 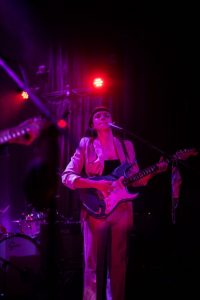 Ohmme’s STAGED set is available to be watched until 11:59 p.m. CDT tonight (April 11) so there’s still time to see this magical show.

Click here to get tickets and head over to Audiotree.tv to check out the upcoming stream schedule. More information about Ohmme can be found at Ohmmemusic.com.