​Dr. Jane Fleishman is a sexuality educator who focuses on older generations and the author of The Stonewall Generation: LGBTQ Elders on Sex, Activism & Aging. We interviewed Dr. Fleishman about overcoming shame related to the aging body and sexual exploration. 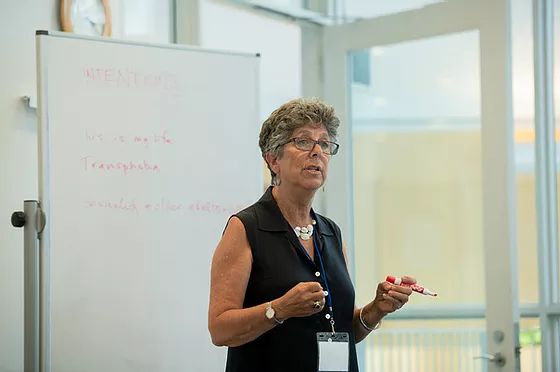 ​Let’s separate out body shame and shame around being sexually active. How do they both show up differently for older generations?

​As we age, there’s just so much shame heaped on us. How we look, how we present ourselves to the world. And if we want to be sexual, we get messages that we aren’t supposed to be sexual, that sex is strictly for the young ones. I called my TEDx talk, “Is it OK for grandma to have sex?” because I wanted people to really think about the coded negative messages we give older people about sex. And if we can’t even imagine a sexual life for an older adult, what does that say about the rest of our population? Researchers have found that women’s bodies are often stigmatized in terms of their wrinkles, bags, sags, and loss of muscle. Not only are we stigmatizing women’s aging bodies, but we extend that to all genders. Anti-fat bias is rampant. Thinness is revered. It’s so hard but accepting our bodies as we age means we’ve got so many obstacles to overcome, and shame is right at the top of the list.

​If you identify as a man, body shame can affect you as well, especially around sex. Research indicates that men experience shame in response to difficulties in sexual activity. And when there is difficulty with an erection, there is often so much shame (even though it is extremely common) and they don’t know where to look for solutions. We are so fortunate to be living at a time when there are actually sex toys and tools being developed to help us with any part of our sexual lives that may need a little extra help.

​For folks trying to improve their sex life (either with current partners or through dating), what are some of the things they can do to tackle sexual shame?

​What about body shame? How does one find confidence in their aging body?

​It’s all intertwined and completely connected. How we feel about our bodies has a direct connection to how we feel when we are being sexual. Think about it. When was the last time you took your clothes off in front of someone and didn’t feel a twinge of anxiety about what they were seeing? And now think about doing that with an aging body.

​I actually love the look of aging bodies, but I know I’m in the minority here. Perhaps it has to do with my research or my work, but I’m on a campaign to have older people undress in the sexiest light possible, with the sexiest music playing in the background, just to readjust our fears about what we might look like as we age. Nobody looks good in bright lights so think about that the next time.

​When we look in the mirror, what we see has very little to do with what others see when they look at us. Negative body images can reduce sexual satisfaction but it doesn’t have to be that way. Many of us derail ourselves from sexual pleasure before we even get started. We can resist shame, reframe fear, and reimagine our own bodies. We can overthrow the negative stereotypes and find sexual pleasure. Sex is a human right. And sex is worth having –in any type of body and at any age.

​How do folks find cheerleaders? Sex-positive friends and lovers to have needed conversations and experiences with?

​A couple of years ago, I did a workshop at a fantastic lingerie shop who like to promote sex positivity to their customers. It was really fun asking the people who came to talk about aging and sex how they dealt with the shame that is often attached. And one of the participants said that they have all these groups, book groups and exercise groups and the like. But there’s no group to talk about sex. So they decided after the workshop to go out for a drink and talk about sex. And it led to a group that met after that pretty regularly. They called it the Coconut Club. love that. Not only because it was so spontaneous and easy for them (this was pre-COVID), but because they weren’t buying into the stigmas about sex and their older bodies. We all need places to talk about sex more positively. Communicating honestly about sex with a trusted friend or beloved lover is so rare yet it gives me hope when I hear people talking!

​What else would you add to this conversation that I left out? What’s important about the role of shame in sex while aging?

​We often hear about the accumulated sadness attached to sex as we age, the grief and loss we experience. But very rarely do we hear stories about emergent joy, pleasure, or excitement. One of the people I interviewed in my book said that the best sex in life happened when they were in their 60s. That gives me even more hope. And that’s what I wanted to remind your readers. As Joan Price, a wonderful sexuality educator likes to say, “there’s no expiration date on sex” and it’s never too late to have a healthy sexual life free of shame.

​This interview was originally sent to subscribers of the Sex Rebelle newsletter. Become a subscriber to get similar interviews and posts sent straight to your inbox twice a month.