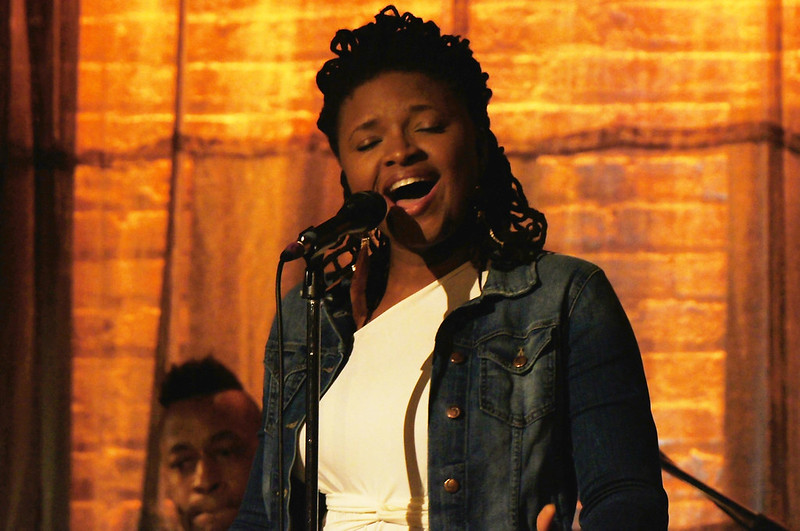 Lizz Wright was nothing short of ethereal when she opened her April 20 set at Evanston’s Space with a hauntingly beautiful performance of Nat King Cole’s mesmerizing tune, “Nature Boy.” Patiently setting the stage with an intricate percussion prologue, the entire crowd became transfixed the moment she started singing, her rich, compelling alto voice filling the expanse of the intimate venue.

The show had a “Storytellers” vibe as Wright frequently shared inspirations, thoughts and even personal insecurities. One such moment found the singer recalling her childhood growing up in a Pentecostal church and her longstanding fear that she would run into someone from her past who may have a less than approving outlook on her life as a touring musician. When this nerve-racking moment finally happened, Wright said that she was ready because she was armed with music in the form of her “Freedom & Surrender” tune, “The New Game.” Funky with powerful R&B rhythms, the song has the perfect amount of soul to stop anyone in their tracks.

Wright truly took everyone to church with her “Salt” track, “Walk With Me, Lord,” her joyful energy filling the room even when she took time out to enjoy jazz-inspired solos from her talented band comprised of Chris Rosser (guitar), Brannen Temple (drums), Nicholas D’Amato (bass) and Bobby Sparks (keys). With rock ‘n’ roll organ riffs and delicate arrangements on the piano, Sparks often provoked cheers from fans with his fast fingers and inspired playing.

One of the most impressive moments of the night occurred when Wright showcased her immense talents on the complicated and gorgeous love song, “Here and Now.” Untraditional key changes and expansive phrasings surprised the audience at every turn as the singer flawlessly sang each impossible note. At the close of the song, she candidly called the track her “weird baby” for its unorthodox composition and challenging melodies as fans seemed genuinely moved by the scope of the number.

One of Wright’s greatest gifts is that she has the ability to make you feel like you’ve never really heard a song until you’ve heard her sing it. Whether it’s the Bee Gees’ classic “To Love Somebody” or “The First Time Ever I Saw Your Face” – which earned Roberta Flack a pair of Grammys in 1972 – Wright brings a new, surprising element to every track. This talent was most apparent on her cover of “Old Man” by Neil Young, which she played early in the set. Starting out soft and contemplative, Wright’s rendition later evolved into an all-out jam session that elevated the folk song to previously unreachable jazz-rock heights.

Wright has tour dates scheduled throughout the spring and into the fall – including performances scheduled at noteworthy festivals like Newport Jazz Festival and Monterey Jazz Festival – and her superb 2015 album, “Freedom & Surrender,” is currently available everywhere music is sold. Enjoy photos from her performance at Space above and be sure to follow Wright on Facebook and Twitter to keep up to date with her latest news and schedule.