There’s no doubt about it, St. Vincent, AKA Annie Clark, was the ideal headliner to perform at the second day of the Pitchfork Music Festival on Sept. 11. Clark’s commitment to character, theatrics and musicianship was unmatched. Add to that a slew of fresh songs from her 2021 album, Daddy’s Home, along with a career’s worth of experimental yet radio-friendly singles, and, in most settings, St. Vincent’s set would be the only performance to dominate headlines.

The Union Park event isn’t most settings and the day’s lineup proved to be an abundance of riches in the form of innovative artists who are each headliners in their own right, rock stars of their own genres and generations. 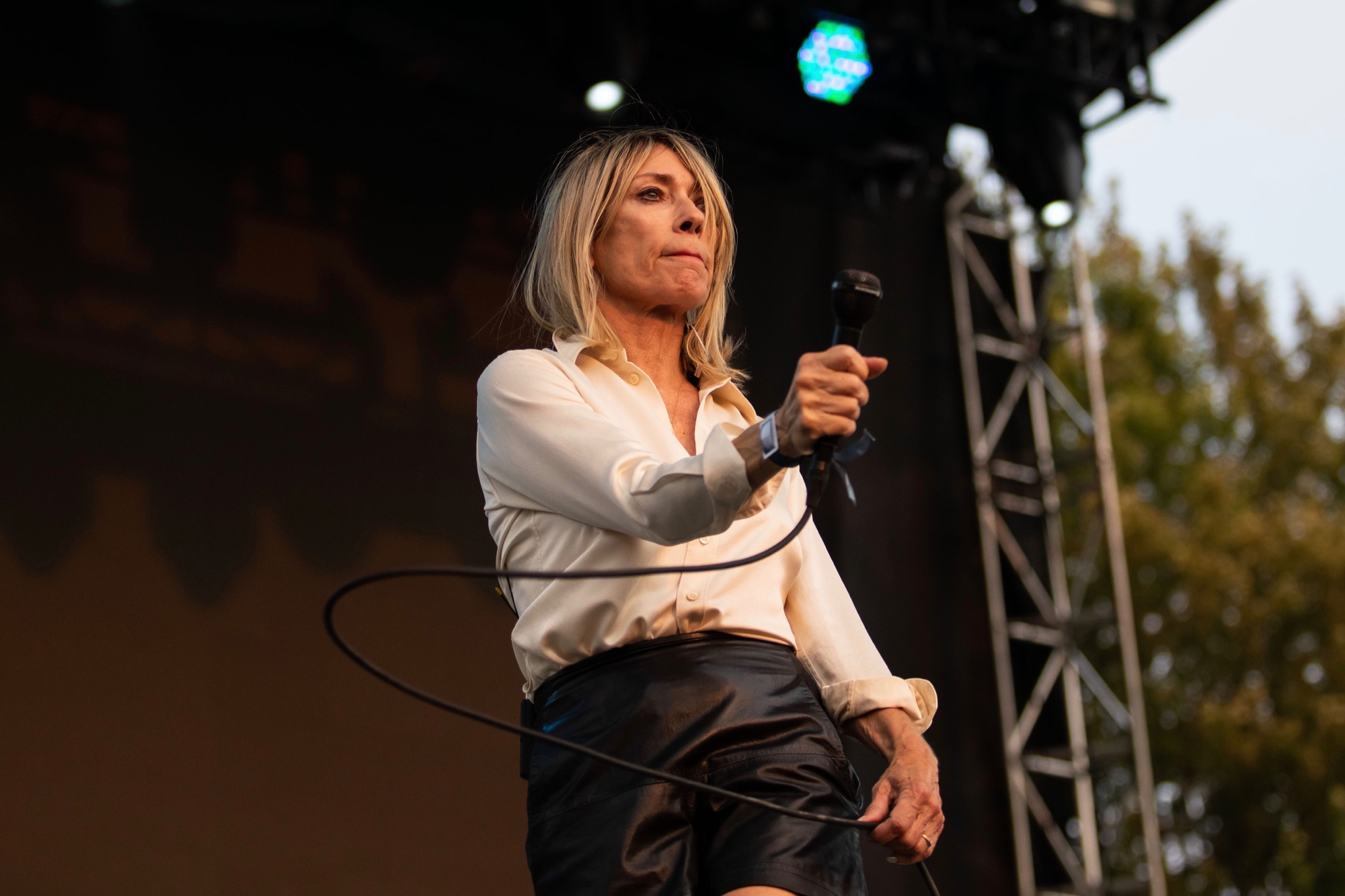 Kim Gordon performs at the Pitchfork Music Festival in Chicago on Sep. 11, 2021.

Prior to Clark taking the Green Stage, Sonic Youth co-founder Kim Gordon rocketed everyone within earshot into her galaxy. A wall of distorted sound, harnessed from her noise rock roots, was juxtaposed with stark, solid beats to create an unsettling yet completely appealing atmosphere which Gordon utilized to sing and speak poetic truths. “Sketch Artist” served as the introduction to the set and much of No Home Record – Gordon’s 2019 solo debut – followed. A deliciously loud and angry “Murdered Out” was the perfect lead-in to the chaos of “Don’t Play It.” “Cookie Butter” found Gordon armed with a guitar which she effortlessly wielded to create compelling abstract art so vivid in its sonic aura you could practically see it. 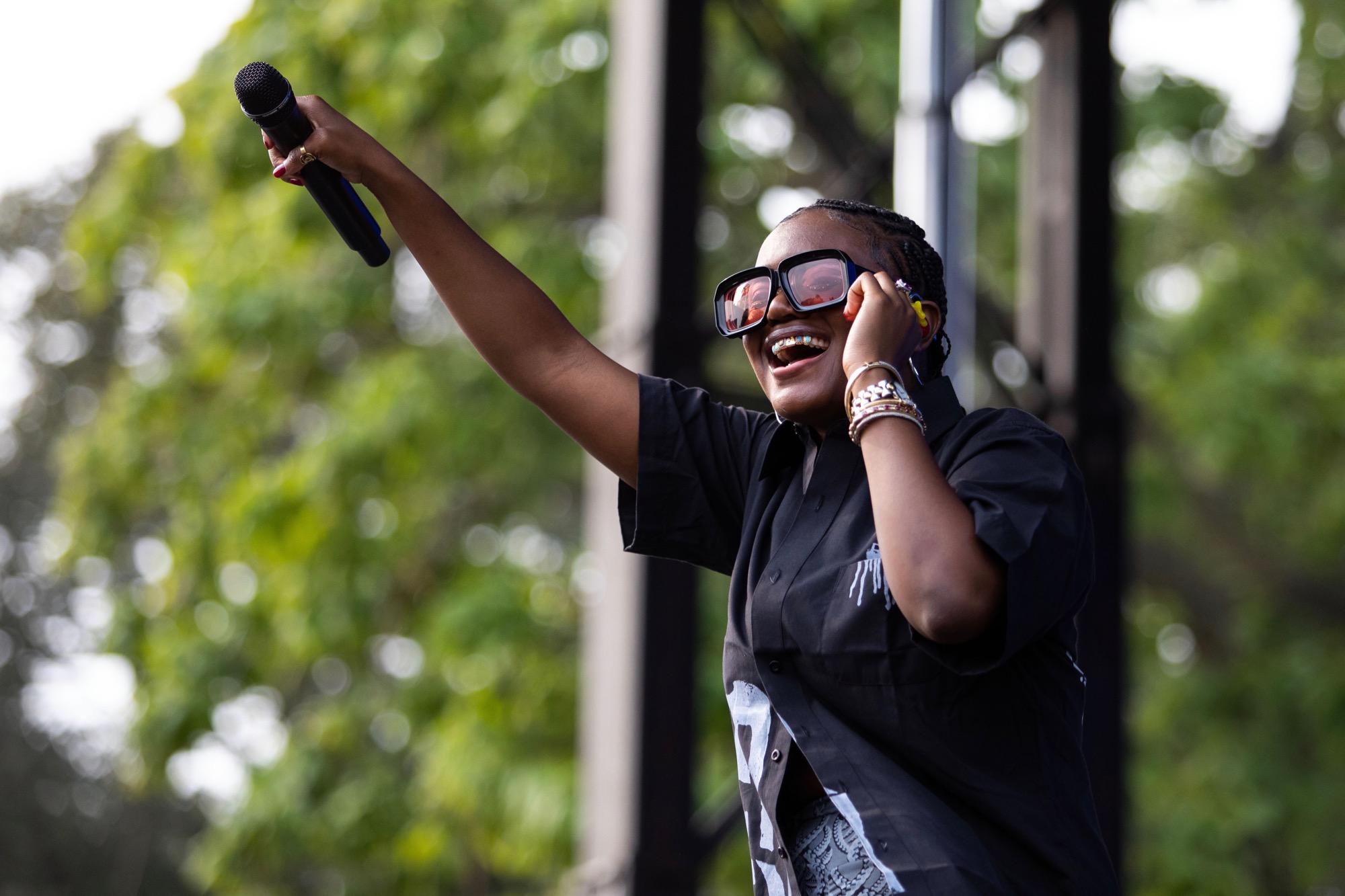 Amaarae performs at the Pitchfork Music Festival in Chicago on Sep. 11, 2021.

Earlier in the day on the Red Stage, Amaarae commented on the beautiful crowd and how happy it made her to see everyone’s beautiful faces after not playing live for two years. She explained that the pandemic forced her to make time for herself which inspired her to write the song, “Leave Me Alone,” off her 2020 album The Angel You Don’t Know. Her sweet vocals, with just the right amount of rasp, purred as she sang of how “talk is cheap.”

Katie Crutchfield of Waxahatchee also made the most of her set which blew in like a cool breeze in the hot afternoon sun. Backed by the Detroit band Bonny Doon, Crutchfield opened the set the same way she opened her 2020 release, Saint Cloud, with the life-affirming slow-burner, “Oxbow.” For fans of easy Americana sounds – and who isn’t – the performance was a blissful highlight. 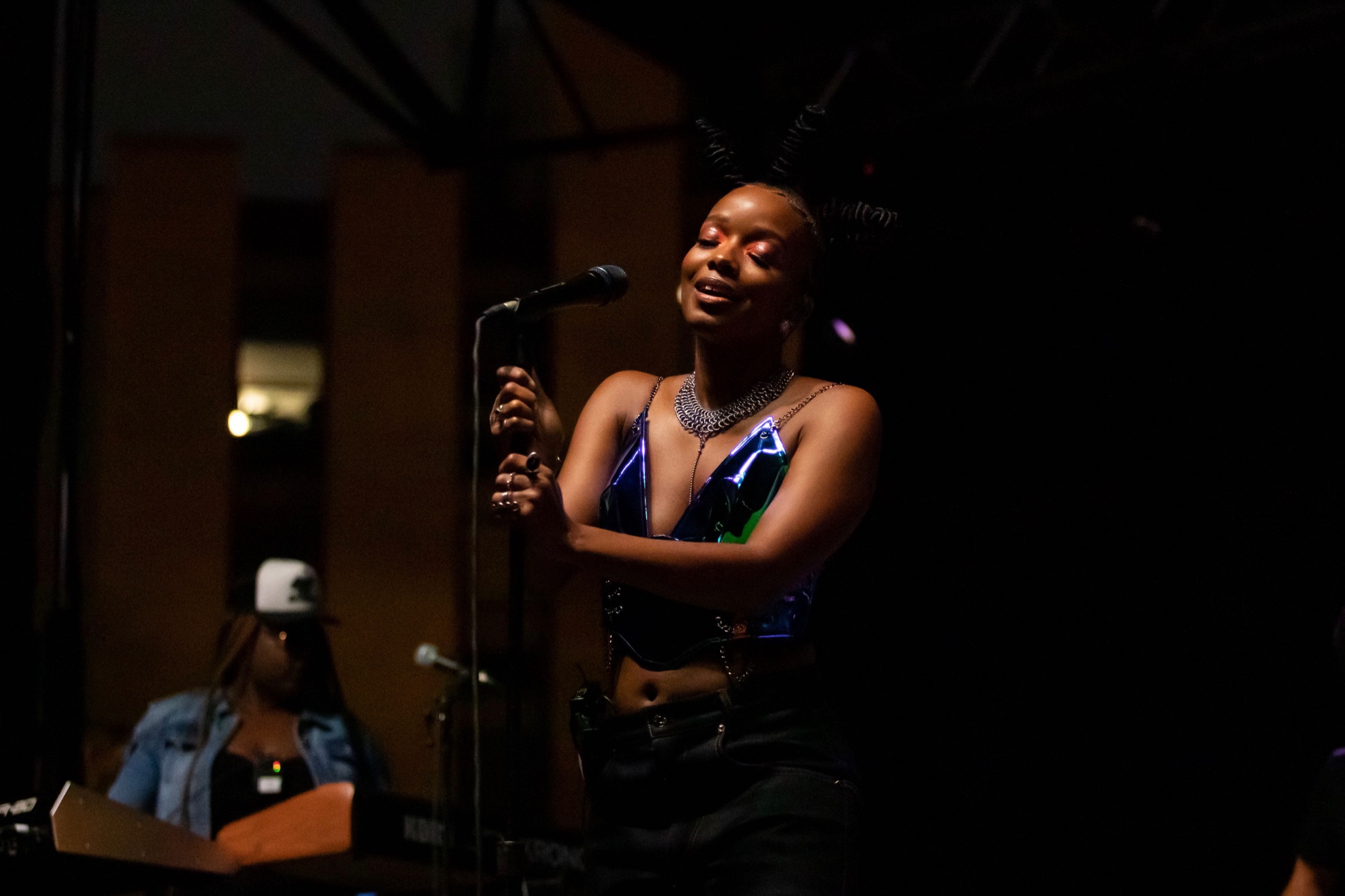 Jamila Woods performs at the Pitchfork Music Festival in Chicago on Sep. 11, 2021.

Hometown hero Jamila Woods has yet again earned the title of Pitchfork MVP as she stepped up to the plate – and knocked it out of the park – to switch her set from an early-evening slot to become the Blue Stage headliner after Jay Electronica had to drop off the schedule. She made the most of a similar situation back in 2017, when she was bumped up to the main stage after The Avalanches had a last minute cancellation, creating a buzz-worthy moment that delighted fans. This time around, Woods somehow created an intimate, club vibe amidst the tree-lined stage, perfect to enjoy the music from her 2019 masterpiece, Legacy! Legacy! as well as her captivating debut album, Heavn. 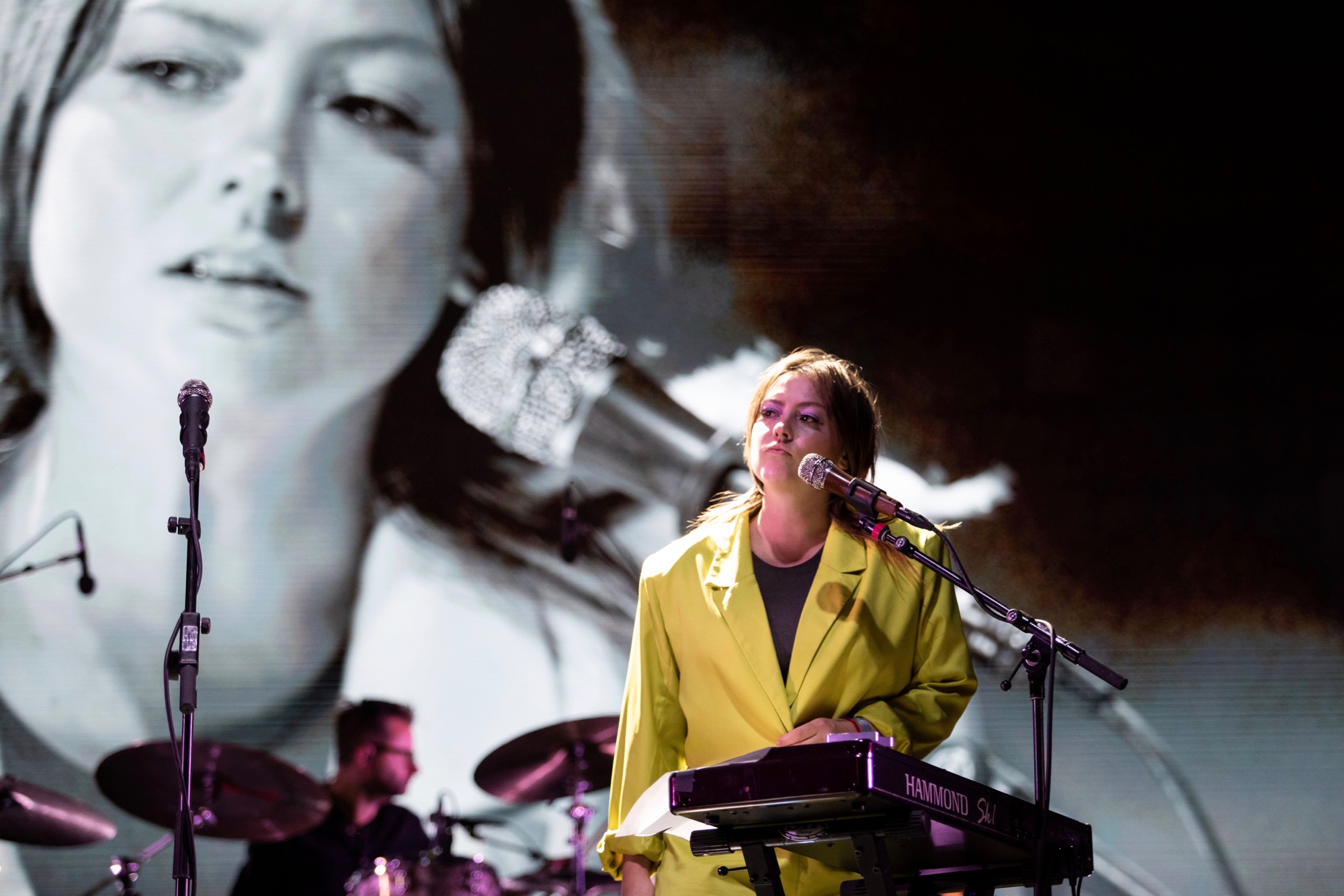 Angel Olsen performs at the Pitchfork Music Festival in Chicago on Sep. 11, 2021.

Across the park, Angel Olsen had the Red Stage feeling like the coolest alt-lounge you’ve ever stepped foot in, somehow smokey without a cigarette in sight. “All Mirrors” and “Shut Up Kiss Me,” with its live-in-the-moment message on full display as Olsen commented on the “intense day” that was the 20th anniversary of 9/11, were stand-outs of the set but it was her show-closing duet of “Like I Used To” – with special guest Sharon Van Etten – that created one of the most memorable performances of the fest so far.

With so many artists bringing big headliner energy to the table, Clark had more than one tough act to follow. She, of course, rose to the occasion with a 1970s-inspired set that told a story of intrigue and empowerment with guitars, harmonies and even a theremin. “Digital Witness,” “New York,” and “Down” were among the songs that had fans singing along with the sound Clark’s always impeccable voice.

The Pitchfork Music Festival is set to conclude with its third and final day on Sunday, Sept. 12. More information about the event can be found at Pitchforkmusicfestival.com. 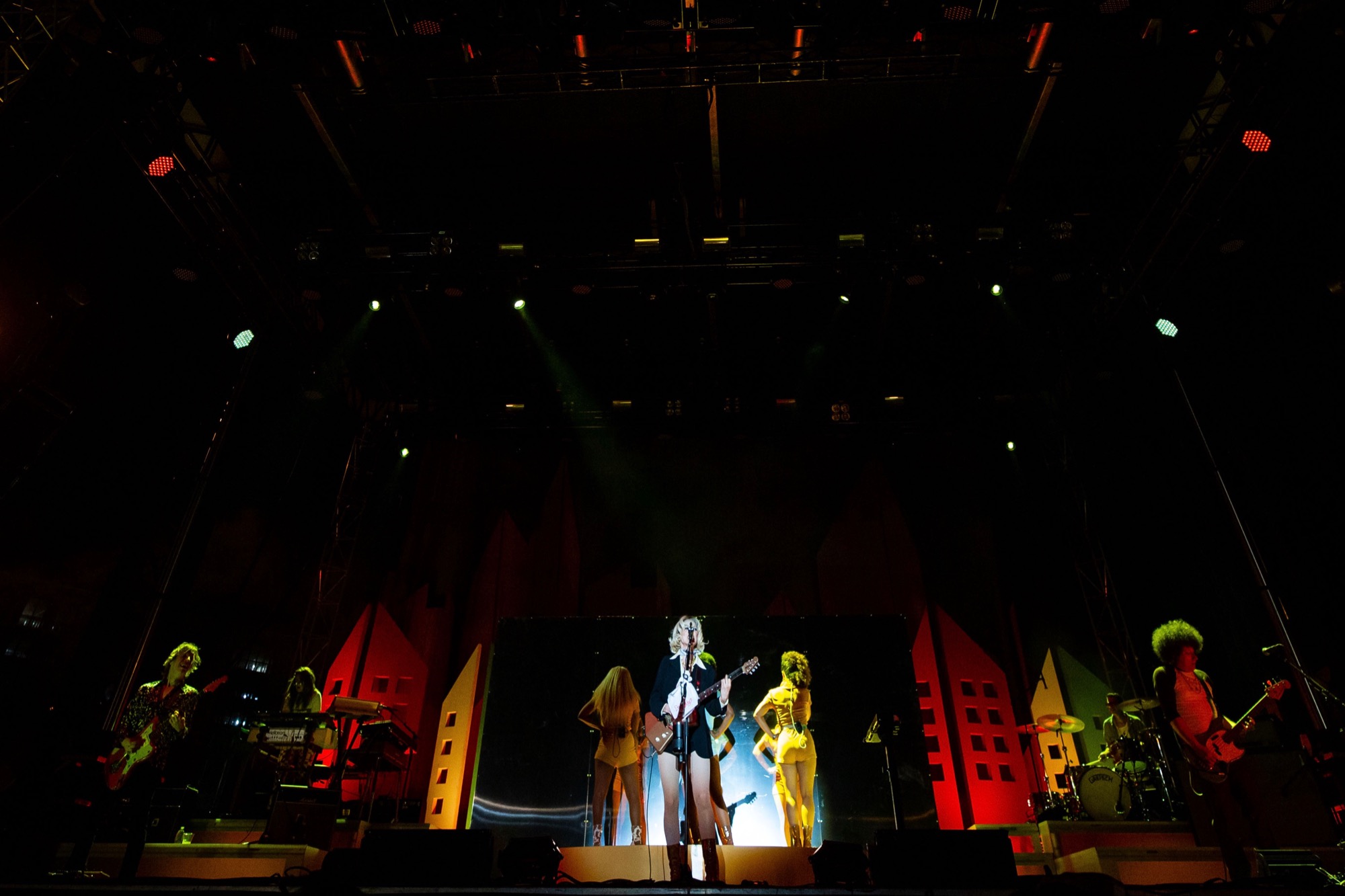 St. Vincent performs at the Pitchfork Music Festival in Chicago on Sep. 11, 2021.