The first question was about police reform. Less than an hour after Jason Van Dyke was sentenced to 81 months for the killing of Laquan McDonald, candidates gathered for the American Civil Liberties Union (ACLU) of Illinois Chicago Mayoral Forum. Six of the active candidates were present: Amara Enyia, LaShawn Ford, John Kozler, Lori Lightfoot, Toni Preckwinkle and Paul Vallas, and the forum offered a stage to outline individual policies to a packed house at the Chicago-Kent College of Law. Moderator Amanda Vinicky of “Chicago Tonight” questioned candidates on a number of issues related to civil liberties, including Tax Increment Financing (TIF) and limiting the power of Immigration and Customs Enforcement (ICE) agents. But it was police reform that was the main topic of the night.

“Police reform has been in the news pretty much all of this week,” said Max Bever, deputy director of Communications and Public Policy of ACLU of Illinois. “Especially with the last few sentences that came down.”

The reception before the event was packed with people checking Twitter for updates. Audience members were fixated on it—discussing the sentencing and how it would affect not just the city, not just the victims, but the upcoming mayoral race. As a topic of discussion, police reform was not a matter of “if” but “when.”

We didn’t have to wait long. Police reform was the opening question. It was also the closing question: “Was the sentence for Jason Van Dyke justified?” and “Would you advocate for any changes in a new contract with the Fraternal Order of Police?” The opening statements of candidates like former federal prosecutor Lori Lightfoot and Cook County Board President Toni Preckwinkle addressed the sentencing.

“I don’t think the sentencing was justified,” said Lightfoot. “I say this as a lawyer, as someone who deeply respects the rule of law. We can talk about reform, but our judiciary needs to have the same spotlight as the rest of the criminal justice system.”

Preckwinkle mentioned the duality of the situation, saying, “He’s the first officer in 50 years in the city of Chicago to be convicted of murdering one of its residents,” yet she also mentioned she was “profoundly disappointed and outraged by the sentence. We have two standards of justice: one for black and brown people and one for police officers.”

In addition to police reform, the event also offered an outlet for candidates to discuss their policies as a potential mayor. “This is a forum to discuss all of the civil liberty concerns that are facing this city,” said Bever. “There are many issues coming up in 2019 and over the next 10 years that range from police reform to surveillance to the increase of cameras across the city, so we wanted to bring as many candidates as we could here tonight to discuss their issues and find their position on them.” 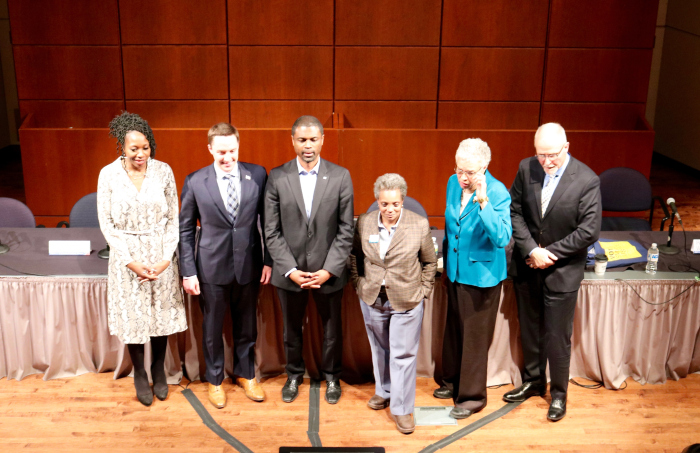 The Spark Notes version of the debate is as follows:

Candidates were questioned on surveillance technology used in Chicago and the efficacy of the city’s gang database—policy consultant Amara Enyia was clear that the database was “a violation of people’s rights,” while former Chicago Public Schools CEO Paul Vallas called for a moratorium on the current database to create a new system that provides data to the CPD without any civil rights violations.

The first crowd boos of the evening came from a question on TIF spending. Following a query on TIF restrictions for religiously-affiliated healthcare providers who limit care for reproductive and transgender health care, attorney John Kozlar suggested that TIF funds should be offered for mental health services, but “did not believe in abortion for late-term pregnancies.”

All candidates advocated for more radical transparency for processes in government, calling for improved access to public hearings, as well as placing civilians on oversight boards. Candidates also listed their plans to close loopholes in the city’s welcoming ordinance that allows the CPD to help ICE agents.

For the final question of the evening, Vinicky asked what changes candidates would make in a new contract with the Fraternal Order of Police. Vallas noted the importance of taking officers off the force who have violated the code of conduct, while State Representative LaShawn Ford insisted that negotiating the contract should rely on information from the Department of Justice report and the proposed consent decree.

The questions throughout the evening highlighted the issues that a new mayor would face upon entering office. The election is a crowded one, and the race will be tight. “We don’t really get this often in Chicago,” said Bever. “So to use the moment and kind of push us forward on this topic, especially when it comes to police accountability, is really important.”