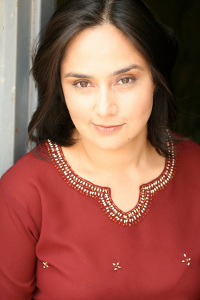 Sapna Kumar is a stand-up comic and actor who has appeared on LOGO TV’s “One Night Stand Up 9″ and NBC’s “Last Comic Standing 4.” Here she sheds some light on what’s it like to be a funny lady in Chicago, angsty folk singers and what makes her Rebellious.

Who first told you that you were funny?
My parents and my brother. My sister just wanted me to stfu.
What made you decide to be a comedian/actor?
I did plays starting from junior high onward. I studied theater in college and creative writing. I liked writing my own material, too, and I knew that from being on, yes, the speech team (geek club) in high school. So I started doing stand-up in college and did my first paying club performances at the age of 19.
What did your parents say when you told them about being a comedian?
They thought it was fine as long as I didn’t quit my day job. I quit many a day jobs to take paying acting or comedy work and often ended up with regret. As we know, short-term jobs don’t last forever. I think they always accepted it was a part of who I am, but they taught me to be self-sufficient–financially and so forth. In other words (hear this in the voice of a parent) “The day job must come first.”
What’s your day job?
My next job will be in digital content production at an educational publisher. It’s short-term, for now.
What’s the most fun gig you’ve ever done & why?
Not necessarily a gig, but shooting the indie feature film “Promise Land.” Kevin Dalvi is an awesome indie film director. I admire his energy and enthusiasm. I also got to work with my old pals from Rasaka Theater, like Kamal Hans, Fawzia Mirza, and Anita Chandwaney. It’s a brown family affair!
What was the least fun & why?
I don’t know. I can’t think of a specific one, but I remember getting a good kick out of those variety nights where the venue has booked angsty folk singers, overly political poets, and then a loudmouth comic like myself. The asynchronous lineup always seems to confuse the audience. They laugh at the angst and cry at the comedy. Ya know what I mean?
Who’s the coolest comic you’ve ever worked with and why?
Sonya White. She’s not just a touring national headliner. She’s a coach. She’s encouraging and tells you what’s what at the same time.
You’ve performed before both GLBT & straight audiences — any differences between the two?
Not so much anymore. The only time it gets weird is in smaller Midwestern markets.
Where do you get inspiration for your act?
My crappy life.
Are there challenges to being a female comic, particularly in Chicago? If so, what are they?
I think that it is dangerous, when you think about it, to do it full-time, like some comics. I’m talking about working the club circuit on the road. You get paid on the road, and you drive through some not-so-great areas to get to the show. I think that’s why there are more men in comedy in general. I’m sure a lot of women are like me, and are like, “You want me to drive where and do a show after how many hours of being on the road? You want me to drive in rain, sleet, or snow.” I don’t mean to generalize the genders, but women tend to be more cautious than men when it comes to safety. Society has made us that way. And when I think about those women in their 20s without cars doing shows until 2 a.m. and taking the train home in Chicago, I start to question if it’s really worth it. Men have to think about safety, too, but it is ingrained in women to think about it as soon as the sun goes down.
Are there challenges to being a South Asian comic? If so, what are they?
Not so much anymore. I think early on, it’s what made me stand out. But audiences are more appreciative of good writing, rather than just a certain comedic bent. The toughest part for me is breaking out of being just a South Asian lesbian comic. I’d like to one day drop all the material about my parents, and have enough to pull a feature set without that stuff.
What advice would you give to female up-and-coming comics/actors?

Hell, I’m up-and-coming to, and have been for a long time. Probably will never “arrive.” What advice do they have for me?
Where can people see you next?
April 10: Zanies Nashville
April 11: Talbott Street, Indianapolis
May 14: Chicago Underground Comedy at the Beat Kitchen
May 18-25: Olivia Cruises at the Punta Canta Resort in the Dominican Republic
What makes you Rebellious?
My cynicism. I look at the world through rose-colored glasses, but the roses happen to be dead. Oh, and the scotch glass is always half full.
Cynicism sucks, but I’ve been surrounded by cynics my whole life. I like them. They have great senses of humor.
What’s the most Rebellious thing you’ve ever done?

I tied a soccer player to a chair, ripped his shirt off, and sprayed whipped cream on his chest while dancing to “Justify My Love” during my senior year of high school. I had a Madonna-fetish. This started a riot because the school stopped the lip synch contest, and then the students rioted because the act ended. It was all over the high school paper. Senior Sapna Kumar’s act causes a riot at Pizza Hit Nite. HIlarious!
Sapna has just created two Webisodes about her journey of leaving her day job behind to be a comedian. Here are Parts I and II: