“We’re super loud, and we like it loud. That’s part of our sound. I want people to feel the music in their heartbeat, vibrating with us,” said Blood People front woman and guitarist Aly Jados of performing the raucous sounds of the group’s new release “Great Retractor.”

The five-song EP – released on April 19, 2019 – builds on the nuanced noisiness of the Chicago group’s eponymous 2016 debut with layered storytelling, raw emotion and riffs, riffs and more riffs. The album is best experienced loud, as fans at the Beat Kitchen during Blood People’s release party can attest, as the four-piece – comprised of Jados, Jeff Loehrke (lead guitar), Norm Burns (bass) and Mickey Molinari (drums) – played “Great Retractor” in its entirety from front to back.

Speaking by phone, Jados explained how the group’s passion for performing, resilience in the face of personal hurdles and an unappreciated genius served as inspirations for the new material. But first, every song starts with a riff.

“Jeff will come up with riff ideas – he’s the riff master – so he’ll come up with that and set a tone for the song,” said Jados. “He’ll bring ideas and I’ll say, ‘Ooh, I like that.’ Then either Jeff will take it farther by piecing parts together, or he and I will work together on adding a verse here or structuring it there so it flows like a song.” 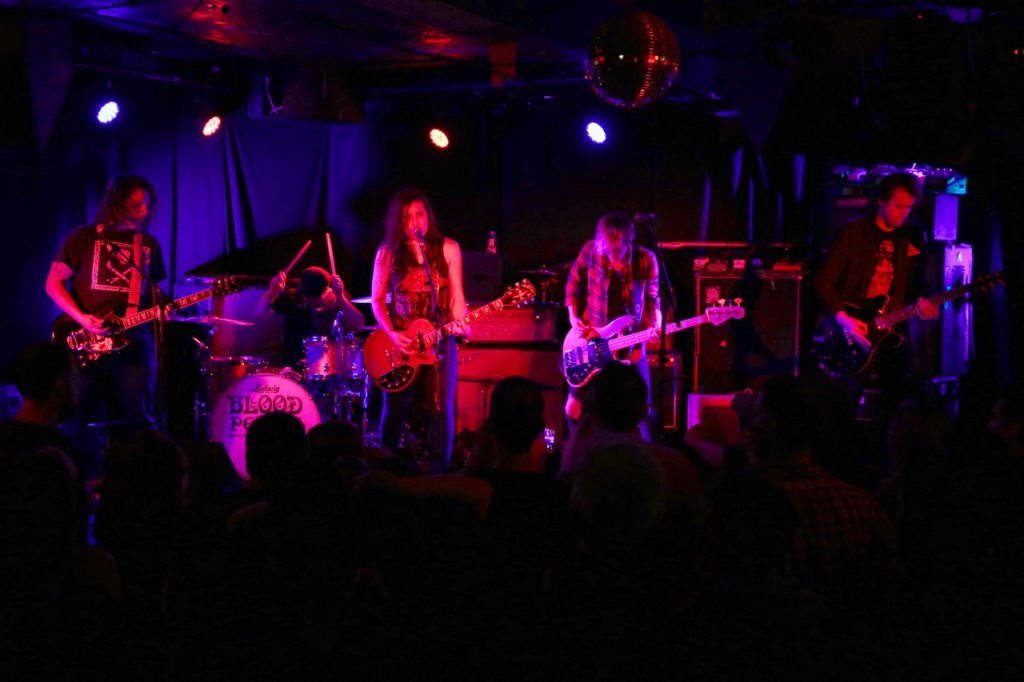 Each “Great Retractor” track flows into the next, painting a human portrait of angst, beauty, menace and self-reliance starting with “Shapeshifter,” a heavy hitting rocker about the award-winning actress and producer Shelley DuVall.

“I love Shelley Duvall so much I feel like I know her personally,” Jados explained. “I think she’s such a brilliant artist in the way that she can shapeshift into these different characters that she plays in different films. It’s unbelievable how she throws herself in there. I don’t feel like she gets enough credit as an actress. To make great art like that you sacrifice a piece of yourself. ”

Jados looked inside herself in crafting the lyrics for “Recluse.”

“That song is kind of a conversation with myself about dealing with depression. When I’m talking about resistance in the song, it’s that resistance internally of knowing what you have to do in dealing with addiction or this or that. It’s saying, ‘Hey, pick yourself back up.’ I’ve had friends pass away from drinking after getting into this spiral. In your life you have to come to a point where you have to change, and you have to fight it every day.”

Though the venue isn’t the subject of the song, Blood People paid homage to Liar’s Club in Lincoln Park with the aptly titled “Liar’s Club,” and elsewhere the band explores its softer side – which is still heavier than 90 percent of popular music – on the EP’s closing title track.

Following a buzz-worthy set at Riot Fest in 2018, Blood People’s fan base has continued to grow. The good news for Chicago concert-goers is the group has plans to unleash the new tunes across the city this summer and fall.

“We play pretty often in Chicago, so be on the lookout,” said Jados. “We’re all always excited to play. We would play every day if we could. We’re kind of like balled-up animals, and you unleash us when you have us on stage.”

“Great Retractor” is streaming on Spotify. More information about Blood People can be found at Bloodpeople.com.