#imwithher and anyone who isn’t can go suck a lemon

As our nation slowly truffle-shuffles towards the general election and the most boring version of “Highlander” ever thought possible, I find myself entranced by the Democratic party. I keep noticing social media posts by disappointed Democrats referring to voting for Hillary the same way a high school football player might sound over having to take his second choice to prom. “She wasn’t my first choice. She REALLY wasn’t my first choice, and I don’t really like her that much, and I feel like I could do better, I mean, I could DEFINITELY do better, but…I dunno…I guess she’ll do.” Jesus, Chad, I’m sorry that Becky wasn’t able to make it, but please shut the fuck up and just take Hillary to the dance instead. I’m sure you’ll have just as nice a time, resulting in a momentary decision that will affect the next several years of your life. 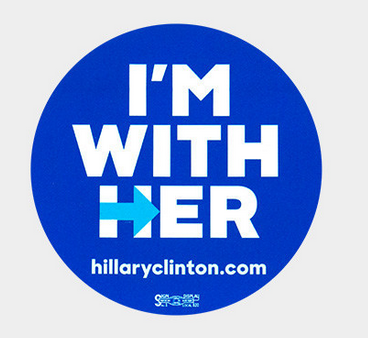 Bernie Sanders had been trying desperately to convince America that he is the Socialist piece of white bread that this country needs, and his critique of the delegate system and focus on student debt are conversations we need, and hopefully conversations that will continue to happen.

I have been accused of voting with my vagina throughout this election process. Yes? And? When have I had that opportunity before? When has there been a woman as a serious contender for the highest political office in the land? The contempt for genital-based voting rights might have been warranted when a deranged Alaskan running on a platform of xenophobia and hairspray was an issue, but the only thing that Hillary Clinton has in common with that semi-sentient Christian-values Pinterest board is that they’re both women in politics. We could speak about her policies, her ideals, her experience as the First Lady, Secretary of State, and New York Senator. But we’ve done that. We’ve done that for decades. She has proven herself to me, and to the rest of the American public, that she knows what she’s doing.

Props to both of the Democratic nominees (Martin O’Malley didn’t matter then, and he doesn’t matter now), but they’re both candidates that have proven themselves to be overwhelmingly competent at their jobs. Especially once you compare them to the Kafka-esque human centipede that the Republican party morphed into during this election cycle.

I’m with her. So is my vagina, so are the vaginas of others, and I pray that Hillary Clinton rides this sea of vaginas all the way to victory—defeating that vengeful Oompa Loompa caked in Cheeto dust who threatens the very fabric of American society.

I spent the first part of this election rather skeptical of all the Democratic candidates. But I liked more of what I heard from Bernie so that was where my choice lay. I wasn’t completely convinced; similarly, I was hesitant about Obama in 2008.

But then the abuse came in from the conservative and ultra-liberal sides. The more I watched the memes and diatribes go up on Facebook, the witch hunts in Congress, it made me wonder if I was buying into the propaganda against her. Too many people claimed she was the devil whilst we stared a real devil in the face. I told myself: “How lucky we have two viable candidates for the Democrats.”

But time spun on and the vitriol got louder and louder. I became less skeptical that much of the hate spurned from a root of misogyny. What had she done wrong? The constant searches for maleficence has led to nothing. Except that Hillary showed that she can keep her cool. She’s the most experienced of all the candidates in politics. She knows how to legislate, negotiate, even bring people together. She tried to get universal healthcare in the 1990s. Yes, she’s had to compromise, make decisions that I don’t like but that’s the life of a politician. I know she’ll be a good president.

I’m now convinced that Hillary’s biggest crime is being a woman. So I’m voting for HIllary because she’s the best candidate.

It’s hard to admit, but I’m voting for Hillary because she’s a woman.

There, I said it.

Apart from all her political achievements, that she’s beyond qualified, and being ravenously hungry to watch a smart person best Trump (thus, restoring my ever-dwindling faith in humanity), if I’m being totally honest with myself, it’s that she’s a woman that clinched it for me.

In the primary, I voted for Bernie. I’m a 32-year-old liberal female. How could I not? But in the wake of his repeated losses, and the vitriol spewed by his supporters, I realize it’s just time.

Because Brock Turner was just slapped on the wrist for raping someone, it’s time.

Because there are still questions about my rights to my body, it’s time.

Because she, and all of us, face intense scrutiny for playing exactly the same games as the men, and perhaps especially because we’re better at them, it’s time.

We’ve done the whole “let’s ask the straight, white guy how he thinks we should run things” to death, and though Obama was a breath of fresh air (if you weren’t choosing to blind yourself to his accomplishments), I’ll quote him here and say, “It’s time for a change.” It’s time to show why women ought to rule the world.

It’s just time. And this time, I’m with Her.

I Feel the Bern


Bernie Sanders has me feeling the Bern because he’s been fighting to put people first since the mid ’60s, when he became active in civil rights. I want a president who was in the front lines of change when times were ugly. Today, Sanders is still fighting. I want a president who fights for racial, LGBTQ+, Disabled, Women’s and Veteran’s rights, Medicare for all, livable wages, affordable housing, cost of higher education, fair and humane immigration policies, and an HIV/AIDS-free generation. These are just the tip of the iceberg. America desperately needs a president who puts people first.

Many Americans have been affected physically and verbally because of their race, religion, sexuality, or gender. I want a president who will instill progressive and positive change for all races, religions, genders, and sexualities.

I have friends who because of their undocumented status can’t apply for citizenship due to uncontrollable circumstances. I’ve had friends who have been raped, physically and mentally hurt by men, but can’t get justice due to the system being in favor of wealthy, white males. I want a president who fights for women’s rights and undocumented families.

Livable wages, affordable housing, and health insurance should be something that every American gets to have, but we don’t all have that luxury. Working three jobs just to pay the bills and put food on the table isn’t acceptable, we shouldn’t have to sacrifice everything just to live.

I feel the Bern because just thinking about a world where people can live in a country with a government that cares about its citizens, gives me the chills. America’s history has been excruciatingly violent, ugly, and corrupt. Now has never been a better time to change that.

what if nobody was president and we all promised real hard to just be cool?

nah, but fa real.
what if we took away guns, put everyone on an even playing field, and pinkie swore on a stack of “JET” Magazines that we would finally just cut the bullshit?

(I know, “why JET magazines?” cause, they’re sacred. it didn’t matter what black person’s house we went to as a kid, there was always a stack of JETs under somebody’s glass coffee table.)

do we even “need” a president anyway? it doesn’t seem like they spend much time changing American government, because most of the legislation is being funneled through Congress and the Supreme Court (featuring Clarence Thomas’ best impression of Samuel Jackson in “Django Unchained”). the Republican Hill got all the bills and measures our country needs to keep all its citizens safe and healthy stuck in purgatory despite what would look like Obama’s best efforts, so why front. these presidential elections just overshadow the true power of Congress. all that press for an official with no immediate power. what’s that glossary term we learned in social studies? oh yea. “checks and balances.” fuck that.

we shouldn’t spend so much energy electing one person, and instead we should focus on the MANY people in Congress, and work to oust folks who don’t represent the breadth of American people. which means, I know we joke about somebody having all the seats but now, no more seats for you. we’ll take all the Congressional ones, thank you.

if we still need someone to talk to foreign leaders and not embarrass us, or hold a competent press conference, we’ll send a cute kid or Jon Stewart.

I’ve always known all the good government moves and changes happen in Congress. maybe we could get some elected officials who aren’t afraid to put down their privileges, stop thinking of money and consider their humanity, or you know, logic.

Several of our fabulous Rebelles contributed to this piece.