Riot Fest 2019 celebrated the Douglas Park-based musical extravaganza’s 15th anniversary by inviting legendary musicians, fan favorites and first-time performers to play across five stages on the weekend of Sept. 13-15. Save Ferris – the SoCal ska punk group that has been sharing its horn-heavy melodies since the mid-’90s – was among the acts making their Riot Fest debut.

Frontwoman Monique Powell reveled in the Riot Fest experience. Not only did she and Save Ferris put on a blistering seven-song Sunday afternoon set featuring “New Sound,” “The World Is New,” and their iconic cover of “Come On Eileen,” but Powell was also on-hand all weekend long to check out some of her friends and favorite acts perform sets of their own.

Rebellious Magazine got a chance to chat with Powell about connecting with fans, creating musical and visual art and how she and the members of Gwar became unlikely friends during Warped Tour 2017.

“I came in early because I’m a fan. I want to see all the bands. I want to see Slayer and I want to see Gwar,” said Powell behind-the-scenes on Friday afternoon. “We did Warped Tour with them and they ended up being my best friends. It’s really funny that it ended up being Save Ferris and Gwar. The last day of the tour they gave me a Gwar outfit – a special shirt that you get sprayed in and shorts and everything – and I came out and I stood in front of the barricade. They saw me and pummeled me. I was drowning in red and blue stuff.”

If you’ve ever seen Save Ferris perform, you know that Powell leaves it all on the stage, making sure that the crowd has an unforgettable experience each and every time. She explained her passion for performance stems from the fact that she is a fan herself and loves going to a good concert. 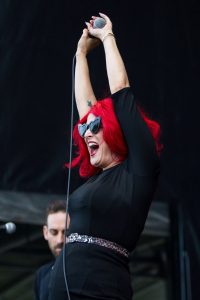 “I know what it’s like to be in the audience and to be in love with the musician, the persona, the music, the words, the performance,” said Powell. “For me, it has always been about connecting with the audience in a very real way. Sometimes I change the setlist mid-set, so the band has to be ready for anything because I want everyone who’s there to leave having had an experience that they feel is uniquely theirs. That this is never going to happen again.”

Powell doesn’t only want to connect with Save Ferris super-fans. She goes for everyone including the too cool for school dudes in the back of the crowd with their arms crossed.

“Now, I really try to get the people who don’t think I can see them, the ones all the way in the back like the dude with the sunglasses on and his arms crossed, ‘I see you,’” said Powell noting that she also makes eye contact with people singing along up front. “I’m the singer that when you think I’m singing to you, I really am. I’m really f*cking looking at you and I’m really singing to you. I love that feeling.”

Along with performing with Save Ferris, Powell was also a featured artist in the Punk Rock & Paintbrushes visual art gallery – presented by Deep Eddy Vodka – showcasing her greatly personal digital art.

“When my dad got sick in 2017 I started creating this art while I was in the hospital with him. He’d be sleeping and I’d be manipulating photographs,” said Powell of the dreamlike images, heartbreakingly beautiful in their vulnerability.

Always a creator, Powell explained that Save Ferris is gearing up to release a full-length album hopefully by the end of this year.

“Lyrically, it’s going to have a little bit more depth in some places. I’m working with Chris Dowd from Fishbone on some songs right now and the vibe is going to be fun,” she said.

Save Ferris is currently touring the UK with Goldfinger and fellow Riot Fest 2019 performers Less Than Jake. Keep up with Powell on Twitter and head over to Saveferris.com for more information about upcoming tour dates.